Sarıkamış: Commemorating the brave on the anniversary of a tragedy 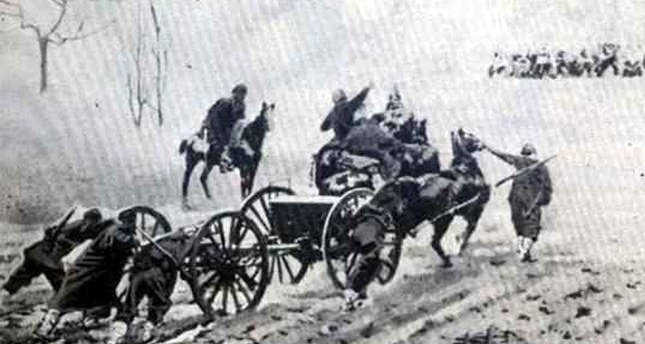 This year marks the 100th anniversary of the Caucasus Campaign, also known as the Sarıkamış Operation. It is considered one of the most tragic events that occurred during WWI as tens of thousands Ottoman soldiers froze to death in the Caucasian winter

Military history is sometimes like an old photograph that is forgotten between the pages of a book. At other times, it is like the memories that have never been expressed or letters that were never delivered. It can be nothing more than the few words that a small child hears while elders talk about the war, while at other times, it stands for offerings, oaths, prayers and hopes.

On the 100th anniversary of the Caucasus Campaign, which remained shrouded in mystery for so many years, reading the dusty pages of military history about the campaign bears more meaning than ever. Today, interpreting the meaning of the common spirit of comradery may be needed for both Turkey and the world.

The Caucasus Campaign was one of the battlefronts of the Ottoman Empire during World War I. The Ottoman Empire aimed at retaking certain eastern provinces such as Kars, Batum and Ardahan that were taken by the Russian Empire as a result of the Russo-Turkish War, known also as the "93 War," which was fought between 1877 and 1878. Additionally, the empire desired to save the Muslim community residing in Caucasus from Russian oppression and reach out to the Turks living near the Caspian Sea and Central Asia.

However, the Russians intended to capture eastern Anatolia and advance to the Mediterranean by taking the province of Trabzon in the Black Sea Region before marching to Istanbul, the capital city of the empire. They also wanted to proceed to the Fırat-Dicle Basin and capture the Persian Gulf. On Dec. 22, 1914, the Third Ottoman Army composed of 118,000 soldiers from the 9th, 10th and 11th Corps, along with the Second Regular Division, began marching to Sarıkamış. However, in the Ottoman plans to stop the Russian forces, soldiers from just the 11th Corps and the Second Regular Division were deployed to Sarıkamış and positioned near the Aras, leaving 118,000 soldiers from Trabzon, Samsun, Kozant and various provinces of Anatolia to march toward the eventual battlefields of the Caucasus Campaign.

The worsening conditions and heavy casualties

Russian and Ottoman soldiers fought against each other many times on the eastern front. While Ottoman soldiers were struggling with the freezing cold, narrow circumstances and diseases, they were also fighting the Russians. More importantly, according to some sources as well as data from the General Staff of the Turkish Armed Forces, 60,000 Ottoman soldiers – almost half of the 118,000-strong force – froze to death on the way to Sarıkamış in the exposed terrain or while attacking the enemy or retreating. The Russians, however, only lost 32,000 soldiers, according to the General Staff of the Turkish Armed Forces. The images in the archives of the former KGB (Committee for State Security) reveal that even though Ottoman troops made some progress on the front, Ottoman forces were struggling overall. As foreign and Turkish soldiers recalled in their memoires, it was almost impossible to bury the dead soldiers due to the severe weather conditions. Soldiers were not able to dig a grave for their lost friends since the soil was frozen, and lighting fire in the exposed terrain was strictly forbidden since it revealed troop positions to the enemy. Moreover, many soldiers barely managed to stay alive only by placing flammable mushrooms covered with felt in their pocket stoves and then placing the stoves under their arms and legs. To make matters worse, the horse carts and gun carriages were hardly moving due to snowstorms, and there were 5,000 Ottoman soldiers that were either missing or taken prisoner by the Russians. Brigadier Gen. Ziya Yergök was injured by a piece of shrapnel and was captured by the Russians in the hospital where was being treated. He was taken to prison camps in Siberia and held captive for five years. In his memoirs that span 1,850 pages and three volumes, he recounted how soldiers who were heading to Sarıkamış ate whatever they found and many died in the barns where they took shelter. He also described the details of the operation, which lasted for 15 days. Epidemics were another problem the soldiers faced during their march to Sarıkamış. Army commander Hafız Hakkı Pasha contracted typhoid and died on duty in the province of Erzurum on Feb. 15, 1915. The local people of the region also suffered from the war as well. Many villages were burned to the ground during the campaign, but people continued to help the worn out Ottoman troops.

What makes Sarıkamış different from other operations during World War I was its defense rhetoric. Thousands of soldiers tried to defend their homeland at the expense of their lives. A villager who opened his home's door to a soldier, a doctor who treated wounded soldiers and the prayers of mothers who waited for their sons to come back home as well as many other examples improved the defense rhetoric of the empire.

Sarıkamış was the focal point of numerous civilian memoires as well as Turkish and foreign soldiers, folk stories, plays and novels. "Mezarından Kalkan Şehit" (The Martyr Rising from His Grave) by Hüseyin Rahmi Gürpınar, "Dünkülerin Romanı" (The Novel of Yesterday) by Burhan Cahit Morkaya, "Üç İstanbul" (Three Istanbuls) by Mithat Cemal Kuntay, "Tatarcık" by Halide Edip Adıvar, "Köyün Kamburu" (The Hunchback of the Village) by Kemal Tahir, the first three volumes of Yaşar Kemal's "Bir Ada Hikayesi" (A Story of the Island) and many other literary works in Turkish literature have featured Sarıkamış. While some of these works criticize Enver Pasha's decision to wage the Caucasus Campaign, others lament for the dead. There is one lesson that these novels, songs and war stories about Sarıkamış teach us, however: "The land is a motherland if somebody died for it."

What the soldiers were most afraid of

Born in 1890 in Tokat, Halil – the son of Hüseyin Zeyneloğulları – was 24-years-old when he joined the army that was marching to Sarıkamış. He and many soldiers perhaps sensed that they would die on the road before encountering a single enemy. The weather was freezing on Jan. 3 and Jan. 4, 1915, and many soldiers who left their homes to serve their country froze to death. The souls of the soldiers, which were on fire to save the unity of their country, still warm us today. Presently, many large and small political and social establishments have so much to learn from those soldiers about unity and resistance. There are dozens of martyrs' cemeteries around Sarıkamış and in the Allahuekber Mountains. Only 12,000 of the soldiers who died on the road to Sarıkamış lie in graves. Perhaps many of the dangers they faced on the road to the unknown did not frighten soldiers such as Halil among many others, but possibly what they truly feared the most was simply being forgotten.