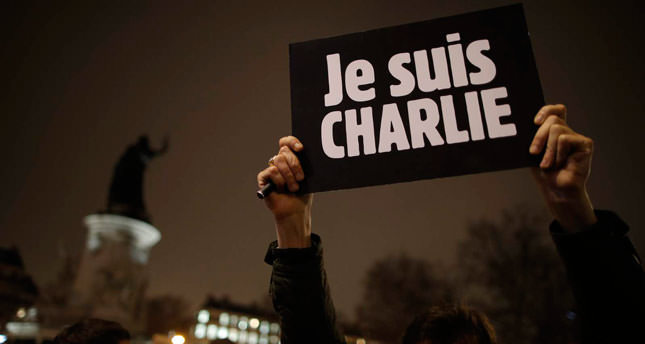 Sitting down to write an article today, I had to scrap the one I had prepared. Yesterday’s attack on a magazine in the heart of Paris has taken over the news and has spread sorrow all around the world

At the time this article is being written the attack on Charlie Hebdo still resonates, it is still a fresh wound. The world is in shock. I say the world here, not the "Muslim world" or the "Christian world." This is an attack that all reasonable people accept as being a terrorist attack which in no way can be justified. A French Muslim supported Charlie Hebdo's freedom to print as they saw fit, even including statements of blasphemy, by quoting Voltaire: "I disagree with what you have to say, but I'll defend to the death your right to say it." Or to rephrase this: "I disagree with what you have to say, but I will defend to the death your right not to be killed for saying it." If someone publishes articles that are a form of hate crime, they should be tried and punished in courts of law, not gunned down in their offices.

People throughout the world are in agreement on this matter – yesterday's attack on Charlie Hebdo was a horrendous and terrible act. I say people, not "Muslim" and not "Christian." There is no difference in how the people of all faiths view this act.

President Hollande's first statement labeled the tragedy a "terrorist attack." The media is stating that the vicious attack was carried out by al-Qaida and thus, accurately or inaccurately, the murder of 12 people in the heart of Paris yesterday has become perceived as a Muslim/Islamic terrorist attack. However, it is time that we start to identify violent acts like that on Charlie Hebdo as criminal acts, not as acts of Islamic terrorism. Recently, there has been a large movement by Muslims throughout the world to respond to such attacks by saying "Not in my name." By labeling a crime a terrorist act, the blame is placed on the shoulders of a community who have no say in the matter and who do not agree in any way with such acts. It is time that we all agree that a crime needs to be labeled a crime. If people from all walks of life and all religions react with abhorrence to such an action, then it can only be a crime; what happened in Paris on Wednesday was indeed a criminal act.

The vast majority of French Muslims would agree that what happened Wednesday was not done in their name. Al-Qaida does not act in the name of Muslims or Islam. To quote Omar Suleiman, an American Muslim, "What is more insulting to the prophet [peace be upon him] than satirical cartoons, are those who murder innocent people in his name." One of those murdered "in the prophet's name" was a Muslim – the policeman Ahmed Merabet. In fact, Ahmed is also one of the prophet's names. So in the name of the prophet a man who carries his name was murdered. Thus, such an action makes no sense and can be nothing but a heinous crime.

This leads one to question why al-Qaida would attack a newspaper. What can such a group have to gain from killing 12 journalists. They in no way have silenced those who support the paper, those who think as Charlie Hebdo's readers think. Any person who has the intelligence to plan such a cold-blooded act, carried out in broad daylight, would have the intelligence to realize that killing 12 people and injuring many more will in no way bring an end to such publications. So, what then have they gained by killing journalists?

There are those who say that this is a false flag operation, carried out by the criminal terrorist organization al-Qaida to get French Muslims to join their "cause." According to a recent poll, only 2 million of the 6 million Muslims in France are interested in religion. In a secular country, a large percentage of Muslims are secular. Secular people are not interested in joining a criminal organization that claims to act in the name of religion. But by "sharpening the contradictions," discrimination increases, and this discrimination forces people who are supportive of the state into a position where they have to take a stance against the discrimination; thus, in this case, French Muslims, faced by a wave of anti-Muslim sentiment, will be forced to take up a position against the discrimination. If forms of discrimination become government policy, the Muslims are forced into a stance against the state. So yesterday's "senseless" act of violence begins to make sense if considered from a very twisted, utilitarian view.

What is certain is that the gunmen responsible for the Charlie Hebdo attack are taking advantage of the uneasy relations between different communities in Europe. Such distrust between communities has always existed; everywhere in the world "newcomers" are often welcomed to help out with labor issues, but when resources become scarce, they are viewed with distrust. Since the global crisis of 2009, recession has hit Europe, and concurrently, anti-Muslim sentiment and acts have risen.

Yesterday's attack was not an attack against journalism or the freedom of expression. Twelve people did not die because the attackers, the criminals who perpetuated this crime, were angry with what Charile Hebdo printed. They were not trying to shut down the magazine because it had published a cartoon that mocked Prophet Muhammad. What happened in Paris yesterday is part of something much larger and much more sinister. There are certain forces that are taking advantage of the mistrust of the newcomer and the mistrust of the "native" to create chaos and tension. Peoples from the former colonies of European countries, as well as from other Middle Eastern countries, have come to live side by side with their former "rulers." They have a right to be in these countries, to pursue an occupation and a life in peace. They are no different from the residents of these countries, except perhaps in the color of their skin or their beliefs.

To quote the same French Muslim friend: "Terrorism has no religion, no color, no ethnicity. Terrorism is a criminal activity and people who are part of such a despicable activity should pay the highest price."

When a group shouts "Allahu Akbar!" and kills a large number of people indiscriminately for no reason other than that they have written or drawn something, this is not an Islamic act. Shouting out Allahu Akbar does not make something Islamic. It just strikes fear into the hearts of non-Muslims, making them wary of Muslims. What happened yesterday struck at the heart of Europe.

Yesterday's act may well turn back the small tide of positive actions toward Muslim communities. From the Canadian town that responded to someone spraying "Go Home" on the mosque wall by writing "You are home" hundreds of times, to the "love-bombing" of a Swedish mosque recently, with local residents putting hearts all over the walls, there has been a slow move to counter the anti-Muslim sentiment. Maybe this act will be the catalyst that will bring the communities together more, allowing Europe to progress with ease as a multi-cultural society. Let us hope that we can work toward understanding between communities, that we can learn to trust and love one another, regardless of faith or ethnicity. As Muslims, as Europeans, as human beings, let us agree on this: a criminal act cannot be carried out in our name. Not only do we mourn with Charlie, we mourn with Ahmed. As we mourn together for a shared reason, let us walk together towards a shared future.