Turkish Hamams: The best place to get clean and refreshed 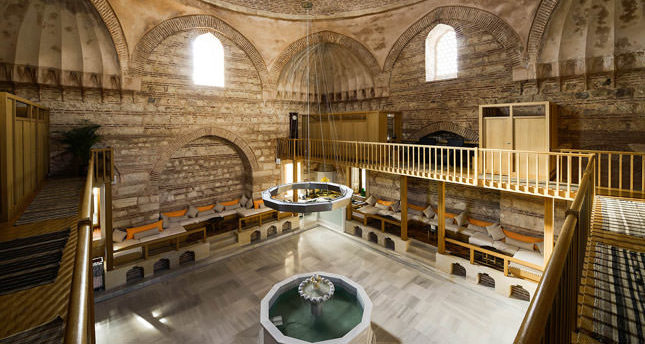 For centuries, hamams have existed as one of the major components of Ottoman and Turkish culture. There is an abundance of hamams in Istanbul that can be chosen from that range in history, services and price

The first hamams (Turkish baths) were heated internally via a pipe system built by the Romans. During the Roman period, the baths were used as physical training and therapy centers. When the Turks came to Anatolia, they combined their own bathing traditions with those of Byzantium and Rome, and integrated them with Islamic rules and customs. Since still water is regarded as unclean in the Islamic world, the usage of bath pools or tubs was replaced with running hot water baths, which gave birth to a new bathing culture in Anatolia that was institutionalized as the hamam. The first Turkish bath was built by the Seljuks in Anatolia, but when Mehmet II conquered Constantinople, numerous Byzantine hamams were built. The word hamam is actually a term borrowed from Arabic, which means "to heat" or "to be hot."

During the Ottoman era, Turkish baths were built in almost every Ottoman city and were integrated into daily life. The baths were not only a part of culture and tradition, but had a religious aspect as well. According to Islam, cleanliness is an important and essential part of life and religion, and one must clean the body thoroughly before any acts of worship. Aside from cleaning the body, the early hamams were places where people socialized together as well. These social gatherings would occur at almost every occasion, such as before weddings, holidays and while celebrating the birth of a newborn. Turkish coffee and Turkish sweets would also be served.

There are many historical hamams in Istanbul worth visting. Some of these hamams are tourist attractions and can come with an extravagant price tag. However, there are also hamams that are historic, beautiful and affordable. Whatever your budget may be, there is a hamam out there for you to enjoy.

This unique Turkish bath is located in Tophane next to the mosque with the same name. Mimar Sinan built this hamam as well, by request of Kılıç Ali Pasha, a former slave who later became the captain of his ship and successfully climbed the ladder of fame until he became the grand admiral of the Ottoman navy. Sinan built the charming hamam with a magnificent dome and a camekan, a relaxation area, beneath it. The fascinating dome is 14 meters in diameter and 17 meters high, making it one of the largest domes designed by the architect. Enjoying this magnificent hamam does not come cheap, however, as the entrance fee is TL 140 and massages range from TL 120 to TL 180. Reservations must be made in advance as well.

The Cağaloğlu hamam is located on Yerebatan Street close to the Grand Bazaar in Fatih. Cağaloğlu hamam was built in 1741 by two architects, Süleyman Ağa and Abdullah Ağa. It is the last Turkish bath house that was built in the Ottoman era, as Sultan Mustafa III forbade the construction of hamams in 1768 because of the increasing demand for water and wood in Istanbul. The beautifully-detailed building with high domed ceilings, internal marble fountains, interior garden and two levels of individual changing chambers are still part of the great architectural delight. There is a cafe inside the famous hamam where you can get a bite to eat and a garden where BBQ parties are held in the summer. Belly dancers and oriental music groups preform from time to time in the hamam as well. The stunning bath is listed in Patricia Schultz's famous book "1,000 places to see before you die" as a must-have experience in Istanbul. The entrance fee to the hamam is 30 euros, an exfoliating body scrub is 35 euros and a 10-minute dry massage is 40 euros.

The Çemberlitaş hamam is one of the oldest and most beautiful hamams in Istanbul, dating back to the era of Selim II. The beautiful yet simple hamam was built by the famous Ottoman architect Mimar Sinan in 1584 at the request of Nurbanu Sultan, the mother of Murat III and wife of Selim II. This hamam is actually Sinan's last works, in which his experience and skills allowed him to combine functionality, elegance and tranquility while keeping the design simple and avoiding overly decorative elements. The hamam was originally built as a bath for both men and women in separate sections, but the women's section was destroyed in the 19th century under the reign of Sultan Abdulaziz in order to widen a road. The architecture of Çemberlitaş attracts the attention of not only travelers but locals as well, such as researchers, photographers, filmmakers, students and media professionals that want to study this magnificent structure. A visit to the Çemberlitaş hamam can be one of the best Turkish bathing experiences you will ever have. The entrance fee is TL 45 ($19.39) and there are bathing packages such as an exfoliating body scrub and a foam massage that costs TL 70.

The Kadırga hamam is a historic Turkish bath that has been serving native and foreign visitors for more than 300 years. Its rich Ottoman atmosphere is what people love most about it in addition to its service, as the people working at the hamam are said to be helpful and informative about the traditions. Getting a massage at hamam is also something that must be experienced. The fee for the massage and bath together is TL 50.

The Kocamustafapaşa neighborhood is famous for its hamams and has an abundance of hamams you can choose from that will not hurt your wallet. Below are two of its hamams with prices that range from TL 10 to TL 25, so you can bathe as much as you like.

In this small and cozy hamam, you can find four little areas known as "sicaklik." It is even believed that the mystic Sümbül Efendi bathed here. After a relaxing bath, you are even offered a refreshing lemon soda.

With its name, which means "little hamam," this comfortable bath house is known for its very high temperatures and its cleanliness. This hamam is recommended for those who do not like cluttered places and would enjoy a nice, solitary bath experience.