Joseph Nye: ‘The rise of the rest’ 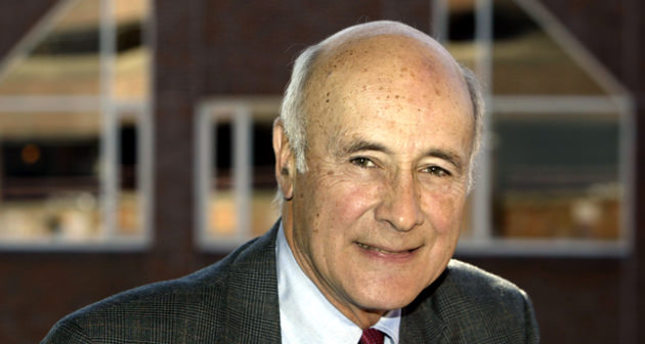 Speaking to Daily Sabah, Joseph Nye said that contrary to many opinions, the power held by the U.S. is not declining. Instead, other actors in the world are becoming more visible as they join the power struggle

As China continues rapid development in terms of its economy and military, it is creating a new conflict area between superpowers from the Middle East to the Pacific. Speaking to Daily Sabah, Joseph Nye, a distinguished professor at the Harvard University Kennedy School of Government, which pioneered the theory of soft power in international affairs, said that even though China is likely to pass the U.S. in terms of GDP in future decades, they won't be able to compete with the U.S. in terms of military power, and especially in terms of soft power, technology and capacity at least for the foreseeable future.

How do you see the shifting of the world order from the West to the East?

There are two big shifts taking place. The first and more visible one is "The Rise of the Rest." This is not actually the decline of the U.S.; it is rather the rise of the rest. Equally important, the second shift is the power shifting from state to non-state actors. This is more complex and difficult to understand. But if we talk about the rise of the rest, BRIC is a strange mix which combines a declining power, which is Russia, and rising powers which are China, India, and Brazil. BRIC is not a useful concept to refer to the rising of the rest. BRIC combines countries that are autocratic and democratic regimes. Russia is a serious declining power with serious economic, demographic and internal problems. There are no other big players in the world which have the kind of health problems that Russia has. Russia is a declining power. Russia is a one-crop economy depending on energy which is exhausted by a terrible expansive corruption. China has accomplished an extraordinary task by taking hundreds of millions of people out of poverty within the last three decades.

In terms of the U.S., "Declinism" is a kind of popular theme, a metaphor. But in terms of the decline of American power, it's a more misleading explanation. It does not show us realistically, what the power of the U.S. is in the world today. Some political scientists try to find similarities between the current position of the U.S. and the last decade of the Soviet Union, which does not make sense. During that time, the Soviet Union was spending nearly a quarter of its GDP on the military; the U.S. today spends around 5 percent of its GDP on its military.

Also, it is very hard to determine the lifecycle of a power. Sometimes it is impossible to predict.

We have to be very careful when we talk about "hegemony." We need strong evaluations in terms of economic, military and other essential sources.First of all, GDP as a measurement is one aspect of power. A country can increase its GDP by increasing its population. China has almost four times more population than the U.S. Look at the more realistic aspect of power: per capita income. Where do the U.S. and China stand in this measurement? Here, China cannot be equal to the U.S. at least for the future of a few decades. China might pass the U.S. on GDP, but that technically and merely means that four Chinese workers will have started to produce an equal amount of the economic value that one American produces.

What does this tell us? Does it mean that China is more powerful or richer than the U.S.?

Americans do not need to be fearful; they do not need to overreact.On the other hand, China won't compete with the U.S. in terms of military power, or in "soft power," at least for the foreseeable future. The same thing can be said about military might, technology and capacity. None of the other big players can realistically balance American military power in the world. American military power will stay unbalanced at least for the next few decades. It has a unipolar status. But economically, the world gets more and more multipolar. China has been investing billions of dollars to improve its soft power. Here is another problem with China: soft power is not something that can solely be produced by governments, it comes through civil society. China is not going to have the soft power that the U.S. has. Its generating of propaganda does not bring strong credibility.

The general argument that many political scientists make is, traditionally and historically when a rising power passes an existing super power, it leads to a conflict. But the case here is the rising power which in today's world is China, even if it surpasses the U.S. in terms of GDP, it is not going to be as powerful as the U.S. It should not always be necessary to see conflict between the rising and existing power. Those political scientists give as an example the German-U.K. rivalry. In this case, before World War I, Germany really passed the U.K., but in this case, the U.S. and China do not have the kind of relations that Germany and the U.K. had a century ago. That's why I think Mearsheimer is not correct. Meanwhile, we see that the shale gas revolution has started to affect the American economy – some economists say that it will increase the GDP at least 1 percent to 2 percent within a decade. It has already created 600,000 jobs for Americans. That will definitely give the U.S. economic competitiveness in the future.Also, in terms of education, the American universities are indispensable to the world. If we look at research and development, the U.S. is also the leading power in the world. Thirty-one percent of the entire world spending on research and development is made by the U.S., which is bigger than the total of Germany, China and Korea combined.

It does not seem a very accurate statement to say that the U.S is a declining power. It's much more accurate to conclude that the rest of the world is closing the gap. When countries reach a certain level of prosperity, their level of growth starts to diminish, but this is normal.

China has to ask itself what risks it is going to take if it gets into a conflict either with the U.S. or a power in the region. It certainly will be a riskier position for China in terms of the sustainability of its economic growth. President Obama said in his April visit to Japan that the U.S. commitment to Japan includes the Senkaku Islands. I think that will deter China from taking adventurous actions in the region. There are serious dangers in the East and South China Sea, this is certain. Neither the U.S. nor its allies in the region can ignore these risks. But I do not think they will inevitably lead the powers into a conflict.

How do you see U.S.-EU relations?

I think the U.S. and the Europeans share many mutual values. Besides these values, economically they are fully integrated. On the other hand, under NATO, of which Turkey is also a member, the U.S. still has commitments through Article Five for its European allies. Some statesmen complain about the fact that the U.S. spends too much money on European defense, but the public still has strong support for the alliance between the U.S. and Europe.

The secretary of defense declared that within the next decade, 50 percent of U.s. naval power will be deployed in the Pacific. Does that mean Europe and the Middle East are going to lose their strategic importance?

No, they will not. Rebalancing the pivot toward Pacific Asia makes complete sense, and the U.S. is already late on this issue. The U.S. has wasted the first decade of the century in Iraq and Afghanistan. The Ukrainian case clearly has shown that the U.S. still has to pay attention to the region and its allies in the region. The U.S. can't turn its back on the Middle East either. Some analysts say that the U.S. has been gaining its independence with regard to oil and gas so that it can turn its back on the Middle East. This is not true. The U.S. has not been involved with the Middle East solely because of oil – it has some other crucial interests in the region that definitely can't be ignored. I do not see that rebalancing toward Asia will create a vacuum in the Middle East.

What are your impressions about the future of relations between Russia and China and India? Might they create a kind of strong alliance against the U.s. throughout Eurasia?

I do not think it seems possible. When you look at the relations between them, India and China still have great suspicions about each other. After this point, Putin needs non-Western options. The future of Russian-Chinese relations is vague. Through BRIC, these countries have created some economic impetus in their favor, but I cannot think that they will forge a strong military alliance against the U.S. I do not see a formal alliance. They could give a much harder time diplomatically to the U.S.