A new chapter for old friends: Istanbul and coffee 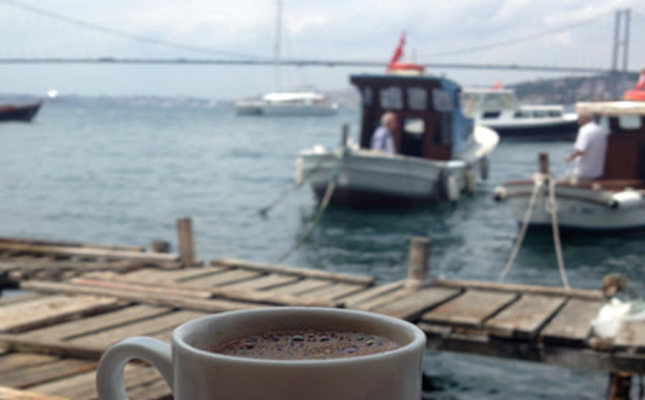 When you ask for coffee in Istanbul, you might assume that you would only find Turkish coffee. However, the city’s diverse coffee culture has grown and continues to develop with the trends of specialty coffees from around the world

I drank the last coffee of the day, wrapped everything up on my desk and left work. The Pera Museum in Beyoğlu's Tepebaşı area was my after-work destination, as I was attending a screening of the documentary film "Kahve Hakkında Bir Film" (A Film about Coffee) with friends from our spoken word club Storytelling Istanbul. As part of the museum's ongoing film program "Kahve Bahane Sinema Şahane!" (Coffee's Just an Excuse, Cinema's the Muse!), we were about to discover Istanbul's trendy coffee culture.

In fact, we were sharing stories with each other about tea and coffee during our club's December meeting. The amusing struggle between coffee- and tea-addict members allowed us to uncover stories from the past as well as the present.

Ethiopia is the undisputed birthplace of coffee and it became popular in Istanbul when it was first brought from Yemen at the time of the Ottoman Empire. Playing a major role among daily beverage consumption and culture, coffee held an unrivalled place until tea increased its popularity. For many of us, coffee maintains its place as a must-drink after breakfast. The development of Istanbul's coffee culture also demonstrates similarities with the trends of specialty coffees around the world.

When someone asked for coffee in the past, traditional Turkish coffee was the only kind that came to mind. Strong coffee is generally described as "okkalı" in Turkish. Moreover, traditional Turkish coffee always accompanies deep conversations. Over years, instant coffee brands or the commonly known Nescafe became fashionable. When Nescafe turned into a popular drink, especially among the youth, its different variations such as "3 in 1" – which combines coffee, sugar and creamer in single-serve sachets – have received the most attention. This is because people now have to specify that they want "Türk kahvesi" (Turkish coffee) when they ask for traditional coffee.

Lower-quality coffee brands have begun to dominate the market as well. Following this trend, consumers searched for tasteful coffee brands such as "Kurukahveci Mehmet Efendi," whose shop located near the Spice Bazaar in Eminönü has recently regained its popularity among young people. The coffee shop has always attracted tourists around Istanbul who enjoy watching the processes of milling and packing coffee as if they were in the middle of a ritual.

Around high-rise business centers in Turkey, the Starbucks trend spread among white-collar workers. Starting the day with a Starbucks coffee is sometimes seen as an indication of high status and sometimes even a lack of manners. White-collar workers have easily become the brand's regular customers thanks to the shop's reputation for high-quality standards. It did not take time for customers to learn about the different tastes Starbucks has to offer.

The arrival of Starbucks was not the most recent coffee trend in Turkey, though. Rather than drinking common brands, gourmet brands have begun their search for specialty coffee to create their own taste. Since then, it is now possible to find specially produced coffee in the city's gentrified venues. Karaköy is one of those appealing places where tourists generally stop to taste the traditional Turkish desert baklava at Güllüoğlu after they get off the ferry. Aside from its established restaurants, Karaköy has now filled with stylishly designed cafes offering rare books in foreign languages. In a short period of time, the cafes have achieved unanticipated fame. Among these, the popularity of Karabatak and Ops has spread to faraway lands, as more people have learned about them by word of mouth.

Karaköy publicly became the heart of the city's coffee culture following last year's Coffee Festival that was held at Galata Greek Primary School. Although the festival took place for the first time, it attracted a large audience thanks to its promotion on social media. Istanbul's prestigious districts such as Nişantaşı, Beşiktaş, Kadıköy and Moda fell under the new coffee trend's spell as well.

To follow the common tradition, those who prepare and serve coffee are called baristas. Baristas are considered the legendary DJs of nightlife as well, and coffee shops now offer specialty coffees for those who would like to take them home. Creating new barista positions all over Istanbul and Turkey, the country's rising entrepreneurs are also good at following coffee trends around the world and introducing them to Istanbul. Similar to those at the time of the Ottomans, coffee shops are an important place for social interaction. Believe it or not, drinking coffee is just an excuse; coffee shops are where you may find others similar to you to sit down for a chat or catch an update on the latest news of friends and the shop's regular patrons. Compared to chain coffee stores like Starbucks and Nero, such individual cafes with specialty products have a cozier atmosphere. If you drop in one of these, you may find the owner is serving a cup of coffee, while customers are cocking their ear to listen to the owner's stories.

If coffee is something you are seriously looking for, the mobile app KahveKap lists different shops and cafes around Istanbul for coffee addicts. Those interested in discovering how the city's coffee trend has developed can download the app and enjoy discounts at coffee shops.

As mentioned earlier, the film program taking place at the Pera Museum's auditorium depicts how coffee addicts take their habit very seriously. The documentary sessions are normally screened to a limited audience for free, but the film we watched was paid screening that attracted a much larger audience, lending credence to the belief that coffee lovers are pleased to see such great interest in the event. As we were leaving the museum, we were still thinking about the stories of coffee producers in Rwanda and Honduras, where some specialty coffees come from.

After the film session, we headed for Twins, a coffee bar in Taksim's Gümüşsuyu area. Unfortunately, the coffee service had ended, but we promised to come back another day. Instead, I ended the night by drinking traditional Turkish coffee. An old friend is always the best one if you need to console yourself, so thank you Turkish coffee.