A clash of ignorance 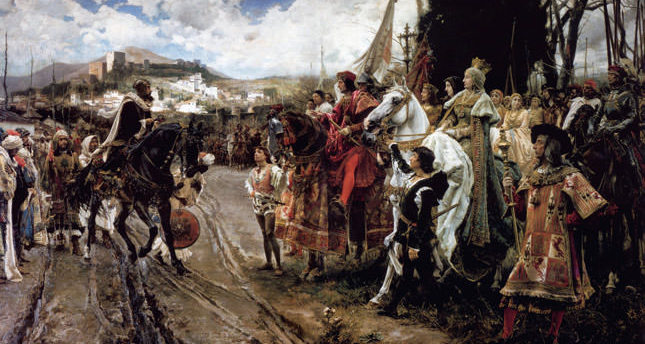 Former French President Nicolas Sarkozy called the Charlie Hebdo attack ‘a war declared on civilization.’ However, it is clear that it is not a clash of civilizations, but rather a clash of ignorance that we experience through unjustified violence and terrorism

Last October I visited Andalusia in Spain. This trip can be counted as one of the greatest experiences of my life in so much that I was looking forward to sharing every single thing with Daily Sabah readers. However, I couldn't manage to put pen to paper until former French President Nicolas Sarkozy spoke on the horrible attack on the satirical magazine, Charlie Hebdo. He called it "a war declared on civilization," which is an implicit statement that could obliquely serve Islamophobic and extremist elements. The words "civilization" and "war" echoed in my mind for a while and then they re-echoed as "Al-Andalus and the crusades." Of course I know Mr. Sarkozy was talking about Western civilization, but it makes no difference when we take the fact that the civilization was inherited from Andalusia to Europe.

Al-Andalus, or Muslim Spain, was established by the Umayyad Caliphate on the Iberian Peninsula where Spain, Portugal and southern France are located today. One of many theories of what the name means is "to become green at the end of the summer." Throughout the Medieval ages of Europe between the eighth and 15th centuries, a rising civilization was formed by Muslims. During the eight centuries of the Andalus civilization, the contribution of Muslims to Europe was amazing indeed.

When Abdurrahman I, the prince of the Umayyad Caliphate who managed to escape the massacre by the Abbasids, arrived in Spain in 755 Cordoba became a cosmopolitan city and the largest capital city in Europe with 70 libraries, 300 public baths, a running water system and even a lighting system in the streets. When Abd-al-Rahman III started ruling al-Andalus, Islamic civilization reached a peak of cultural and economic splendor. Cordoba became a highly sophisticated city and the center of science, medicine, art, astronomy and poetry. The few people who were literate were only the ones in churches in Europe mostly, on the contrary, in Andalusia almost everyone could read. For that reason there was gtreat demand for all kind of books and Cordoba was competing with Baghdad and Constantinople as one of the great cultural centers of the world. "There were poor people with a very good education. Education is a way to be a better Muslim," Pedro Chalmeta Gendron from University of Complutense in Madrid said in the documentary "When the Moors Ruled Europe," made by English historian Bettany Hughes.

The first revelation from God through the Angel Gabriel to Prophet Mohammad was the first five verses: "Read in the name of your Lord who created man from a clot. Read, for your Lord is the most Generous, Who teaches by means of the pen, teaches man what he doesn't know." (96:1-5) "Are those who have knowledge equal to those who do not have knowledge?" (39:9) is another verse from the Quran. The prophet of Islam has also emphasized the importance of education: "The seeking of knowledge is a duty of every Muslim." The enthusiasm for learning among Muslims was by the nature of being a good believer. From this point of view, Muslims searched for very kind of knowledge not only on the matters of religion, but also science, math, philosophy, medicine and astronomy. When Alexander the Great founded Alexandria in the fourth century B.C., a great deal of Hellenic philosophy and science arrived in the Eastern part of the world and Hellenic culture had spread throughout the Mediterranean. When Egypt became a part of the caliphate, the works of major Hellenic philosophers such as Socrates, Plato, and Aristotle were translated into Arabic by great Muslim philosophers such as Ibn Arabi, Ibn Khaldun, Ibn Sina – known in the West as Avicenna – Ibn Rushd – Averroes in the West – al-Farabi and al-Ghazali by adding their own significant contributions.

"Of course one cannot say the Arabs were the only transmitters of Greek sciences. They translated, learned and assimilated in the first period. When they learned enough, they began to produce original work and they started to criticize the Greek scientists. They contributed to the work of Greek scientists until they reached a final crisis. And this final crisis was the crisis, the root of the Renaissance and the scientific revolution. If they had not done this the Renaissance and the scientific revolution would have been impossible," Julio Samso from the University of Barcelona said in "When the Moors Ruled Europe." While these works were preserved in Islamic areas, they were completely neglected in Europe. Christianity was in a period of fundamentalism for 600 years and chose to be on the safe side against the texts written by pagans in case of the existence of blasphemous ideas. It is clear that the Quran guided Muslims while they were studying the inventions that would enlighten the stages of the new ages. There were particular verses about science. The Quran says: "In the creation of the heavens and the earth the alternation of the night and the day, in the ships that sail in the sea with their load … there are clear signs for the people who understand." (2:164)

Muslim scientists studied astronomy for calculating the time and directions, mostly the direction to Mecca. It was a complicated mathematical problem at the time. But Muslims developed on the astrolabe, a Greek device, calculating time in a way for helping navigation, which is excellent to advance sea travel. "The developed astrolabe in turn set the stages of the coming era of worldwide exploration and discovery," Hugges said. Cordoba was attracting academics, scientists and philosophers from all around the world. The libraries of the city were full of academics and scientists working on subjects that were light years ahead of anything else in Europe. The most known scholars that Muslim Spain produced as philosophers, physicians, scientists, judges, artists, were Ibn Rushd, Ibn Sina, Ibn Zuhr – Avenzoar in the West – al-Kwarizmi – Algoritmi or Algaurizin in the West – and Al-Razi, known in the West as Razes, many of which were educated in Andalusia. Martin Luther, the founder of Protestantism, was also educated in Andalusia as well as some popes. "Some of the popes studied in al-Andalus," Assistant Professor Lütfi Şeyban from Sakarya University said.

In medicine Abu-al Qasim, known in the West as Albucasis, was the most famous surgeon in Cordoba specialized in curing cauterization. He prepared a 30-volume encyclopedia of medical practices including the instruments and the methods that were used by eye surgeons for the relief of hypertension in the eyes and were still popular until the 20th century.

The origins of the Renaissance were mostly believed to lie in Italy, but it flourished in Toledo of the Caliphate of Cordoba. Like in all other Andalusian towns, all three communities of Muslims, Jews and Christians lived side by side in peace. Toledo was the cradle of wisdom and learning. It became a translation center and was an ideal place for intellectuals and scholars from different places of Europe to find opportunities for cooperation with other scholars. One of the most famous scholars to come to Toledo after he was dissatisfied in Paris was Daniel of Morley from England. His words are famous for giving an insight into the real Renaissance emanating from Toledo: "When I heard that the doctrine of the Arabs, which is devoted almost entirely to the quadrivium, was all the fashion in Toledo in those days, I hurried there as quickly as I could so that I could hear the wisest philosophers of the world." Daniel of Morley returned to England with a suitcase full of documents, but he was disappointed at the neglect of science and decided to leave England again, but he met John of Oxford, the bishop of Norwich sponsoring the scholars for studying and teaching in an education center which became Oxford University of today, could persuade him to remain.

Unfortunately, with the call of the pope, the Reconquista started in Muslim Spain. Şeyban claims that the first call for a crusade was for al-Andalus. "This was an astonishing active ethnic cleansing. The propaganda sparked by the crusades gave an image of Muslims as a dark skinned, savage, alien enemy," Hugges said. In 1492 Catholics took over Granada, the last remaining emirate and al-Andalus declined. The Spanish authorities first forced both Muslims and Jews to convert to Christianity and then persecuted and expelled 300,000 Muslims and Jews; without any hesitation they burned just as many Arabic books. A golden civilization was grimly crushed.

In his article "When the Moors Ruled Spain" for National Geographic Magazine, Thomas J. Abercrombie says: "Spain and the West stand forever in their debt," to pay tribute to Muslims for their contributions in the sense of civilization. But it doesn't seem Muslim scholars are given due credit in the world today, and an average European and even some Muslims have no idea about the role of Muslims in the rise of today's Europe. An academic at the School for Oriental and African Studies at the University of London, Maria Angeles Gallego's answer is clear evidence for this ignorance when she was asked if Europe is in on the contribution of Muslims nourishing the Renaissance: "It is not something you learn about at school probably not even at university. It was probably a conscious process of the neglect and now we are still suffering from that." If Europeans could learn about the Muslims who created the most civilized era of Europe at the time, the Muslim image would be different. This could prevent the prejudices and negative presumptions of Muslims.

The real core that strengthened the base of the outstanding civilization was "convivencia," a Spanish word referring to the coexistence of the three Abrahamic religions – Judaism, Christianity and Islam. They lived in harmony and in an atmosphere of mutual respect, tolerance, understanding and cooperation during the golden era of Andalusia under the rule of Muslims. In "Out of Cordoba," which was released by the Jewish-American film maker Jacob Bender, it is emphasized that the mutual respect and the tolerant spirit of Cordoba should be the best answer for the idea of the "clash of civilizations" through two inspiring men – the Muslim Ibn Rushd and the Jewish Moshe ben Maimon, also known as Maimonides, who were the most important philosophers advocating logical and free thought in al-Andalus.

Mutual respect and tolerance are indispensable priorities for coexistence. There is no doubt that one of the major features of the civilization was the "freedom of expression," but if you use this freedom with ignorance of the innermost feelings of different communities deliberately and mock the same matters insistently, this can cause public discontent and subsequently damage coexistence. On the contrary to Sarkozy's statement it is clear that it is not a clash of civilizations, it is a clash of ignorance that we have today through violence and terrorism, which have no justification whatsoever.