The crux of the matter in the cradle of civilization 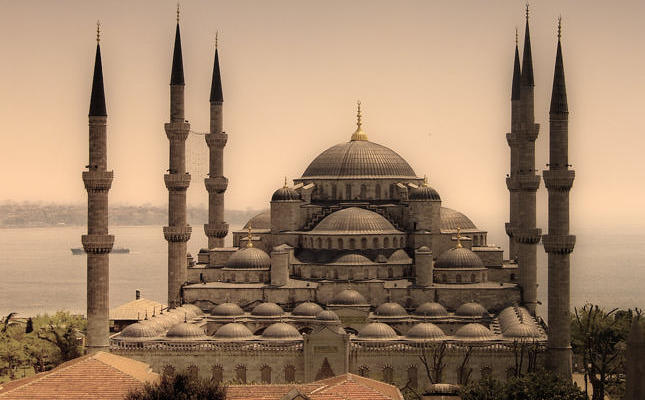 The Sultan Ahmet Mosque is a central part of the Istanbul skyline. Standing for almost 400 years, this mosque has in recent years become the home to a unique tourist service given by volunteers

Sultan Ahmet Mosque, commonly referred to as the Blue Mosque, is an incredible structure. The mosque was built between 1609 and 1616 during the reign of Sultan Ahmed I to symbolize Ottoman power. Built on the site of former Byzantine palaces, the mosque occupies a central location in front of the ancient Hippodrome and next to the Hagia Sofia. The mosque takes its colloquial name from the blue tiles that line its interior.

This mosque attracts a great number of visitors. Due to its central location, it attracts a daily average of 30,000 visitors – more than some countries get per month. However, the Sultan Ahmet Mosque is also a functioning mosque. Indeed, the fact that this mosque still operates creates a bit of a problem. When the congregation is praying, visitors are asked to wait outside. This means that for five times a day, every day, visitors have to queue up to enter the mosque.

Approximately five years ago, some people had a good idea. The visitors lining up to visit the mosque were restless and rather bored while waiting. This group of bright individuals decided to take advantage of this situation and invite people to have a cup of tea and a chat about the history of the mosque, the meaning of prayer in Islam, what the call to prayer means and what Islam is and stands for as a religion.

For five years, volunteers who speak English, German, French, Spanish and Italian have come to assist Professor Süleyman Derin in answering tourist's questions about the mosque and about Islam. They have had a number of people listening to and answering questions, sometimes up to 30 a day, if not more. Many of these people continue to correspond with the guides they talk to during this visit to find out more about Turkey and Islam.

This group is not trying to convert people to Islam as they have no missionary aim. Rather they are attempting to set the record straight, to inform people about what Islam means, what it requires, demands and asks from its followers. People do occasionally show interest in converting to Islam though, and the participants direct the inquirer to the correct people to help them with their spiritual journey. Derin and his group are only concerned with helping people understand the religion better.

In short, for five years there has been a quiet, effective effort to help tourists understand the city and culture that they are visiting. There is no charge for this service and the visitors are treated to a cup of tea or coffee and ubiquitous Turkish delights. A presentation about the mosque and Islam is given and visitors are free to ask any questions they like.

Some of the people who volunteer to help with this effort are international students from Marmara University's Faculty of Theology. These young people have come to Turkey to train to become imams or Quran teachers in their own countries. In their free time they head out toward Sultan Ahmet Mosque, greet tourists and invite them in for a cup of tea. The students enjoy conversing with people about their religion, of which they are very proud. They are pleased to be involved in an effort to combat Islamophobia, even if it is by means of one person at a time.

Today this effort is even more important than ever. As Islamophobia rears its ugly head throughout Europe with irresponsible reporters making statements and newspapers writing screaming headlines that makes one's blood turn cold, this quiet effort to explain – not coerce, cajole or convert – one of the world's biggest religions is vital.

Derin understands the very important fact that any attempt to explain Islam from a defensive position will fail. It is only through demonstration, being open to any and all questions and communication that the walls can come down.

The professor and his students have extensive plans for the future. They are hoping for a more permanent location than the couple of rooms they have at the moment. They are looking for a venue where they can greet and welcome people at all times of the day. There, books are available to read, coffee and tea are offered and, of course, Turkish delights, along with exhibitions, courses and discussion groups. The idea is inspiring and one that is absolutely essential, especially after recent events.

The fact that students and professors give up the little free time they have to make the trek across the Bosporus to volunteer their time, in wind or rain, hot or cold, is enough to tell us that this is a project that requires any support to which individuals can lend their time and resources.

By changing how people view a religion, people and culture, one person at a time, things will change in the end – even if it is slow. Perhaps you many think it is too slow, but it is a start. Moreover, every journey starts with a single footstep. I hope that I will be able to accompany Professor Derin on this journey, and I also hope that any of Daily Sabah's readers whose path happens to bring them to Sultan Ahmet Mosque will come along and join, either as a person who asks questions or as a person who provides answers.