Need an app to connect with your kids? 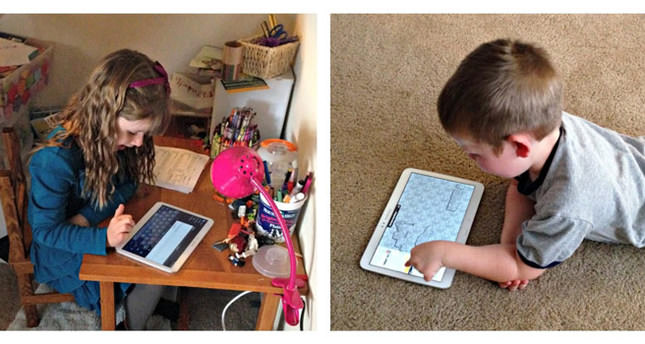 As technology continues to develop rapidly, the terms of communication inevitably change as well, leaving children especially sensitive to this phenomenon. However, parents can find a healthy balance for their children between time spent outdoors and time spent with devices

Last week, I woke up to find the sun shining down on the city. I opened the window and took a breath of fresh air. It was the first time in Istanbul since snowfall and the cold weather that the weather was warm. I had to get out and enjoy this beautiful day. After breakfast, I headed out for a walk to one of my favorite cafes in the neighborhood. I chose a seat on the patio to enjoy my Turkish coffee and read my book. As I sat there, my attention turned to a family sitting a few tables down. It was a family of four, two children probably under the age of 10, and their parents having lunch together. Unconsciously, I found myself observing the family, finding something strange about their "quiet" chemistry.

The family had not said a word to one another, other than giving the waiter their orders, since I had got there. Both parents were on their smartphones and the kids on their tablets. I'm assuming the kids were playing games, since I mean I can't imagine they would be texting anyone or browsing through their Facebook at that age, or maybe they were, who knows nowadays?

Everyone seemed busy enough to neglect the others and was disconnected from their surroundings. They had no idea what was going on around them, not to mention failing to enjoy the nice weather with some good conversation.

In a way, they were perhaps virtually connected to an intangible social world of "others," while failing to feel the tangible social moment they were in. I mean why read others' Facebook statuses while you can ask your child's "status" right at that moment?

I then began to romanticize about my childhood, as I often do when I come across experiences where I would sigh and say, "kids nowadays."

What was so different from now?

As a child born in the 80s, I have always felt that I belonged to the last generation that experienced nature in its rawest form, without the interference of technology – or at least at the minimal level, if TV counts. "The old world," as my parents likes to call it.

Growing up in the countryside of Canada, I got to be away from the busy city life in the concrete jungle and experience the country life.

We didn't have tablets like now or even Atari or Tetris which some had back then. But we did have our imagination, which we used to connect with nature in the tangible world.

For instance, I remember one summer my father had dug out the earth in our backyard to make a pond. That huge pile of dirt became the best playground my sister and I could ask for.

Thanks to our wild imaginations, it had become a vast mountaintop in the Amazons and we were doctors creating medicine and grounding herbs on rocks from all the things that we collected from the fields.

At other times, we would run, play and climb trees, and of course sometimes we would fall too. We would be outside until the moon started to appear behind the apple trees that lined our yard; we knew every inch of that field. My mother would call us in, and we would talk about what adventure we would be going on the next day. There was so much to do.

No cellphones, Facebook or video games involved, just the elements of nature. I do realize that things are now very different. We live in the high-tech days where kids socialize through their Facebook. Statistics say, on average a child spends 7.5 hours a day in front of a TV, computer, video game or cellphone.

I swear the day is coming when kids will learn to text, before they learn to write and this is no longer the "old world."

Parents need to be asking what toll technology is taking on our children. Kids today are part of a wired generation, which is the leading cause of some disturbing childhood trends such as the rise in obesity, attention disorders and depression. Kids are spending the majority of their time indoors and the absence of nature in one's early stages of life can have a negative impact on their overall well-being and mental development. Living in a city like Istanbul, maybe not all can find the opportunity to have their kids run in the fields, but are we even in charge of the variables in our control anymore? Nature inspires wonder and creativity in our children, enabling a young mind to think and dream. Getting children outside and providing them with time will lead to healthier and happier kids. I mean one does not need to be a psychiatrist to realize that nature boosts mental activity and promotes health and wellness. We can just look at childhood obesity, which has nearly tripled over the recent decades. Children who are active outdoors are less prone to obesity than their friends who spend hours inside in front of their TVs and computers.

So here is my dilemma. I always thought my kids would grow up on the same soil I did, so I didn't have to worry about finding green space.

Living in Istanbul, I now find myself in a different situation, considering I had grown up and spent the last 30 years as a country girl surrounded by green wide-open space and living on a dirt road. Now living in one of the most populated cities, I find myself struggling to find the nature in this metropolis of concrete. Sure, the beautiful Bosporus will clear anyone's mind. You can walk for hours and feel the sun and wind on your face. But what if you don't live in one of those million lira mansions on the Bosporus?

As I began to search different "nature spaces" in Istanbul, I was surprised to find so many options, and great ones at that. For instance, Yıldız Park, one of the largest woods within the city, is spread over 46.6 hectares of land, between the slopes of Beşiktaş and Ortaköy, and is formally the sultan's hunting grounds. Bebek Park is the perfect place to sit and read a book under a tree or look out over the Bosporus, while Emirgan Woods and Gülhane Park are also great places to get your daily dose of nature, aside from your public neighborhood parks available in almost every neighborhood. There are so many options, not to mention that most of these beautiful places are drenched in history, which makes a "walk in the park" even more captivating. In the end, only parents can make a change and find a healthy balance to ensure time for nature.

Chances are the children at the table in the cafe will not remember the beautiful day nor the lovely lunch they were eating together as a family, but they will probably remember the score they got on the video game they were playing, without even knowing where they played it.