Looking back on the life of a king 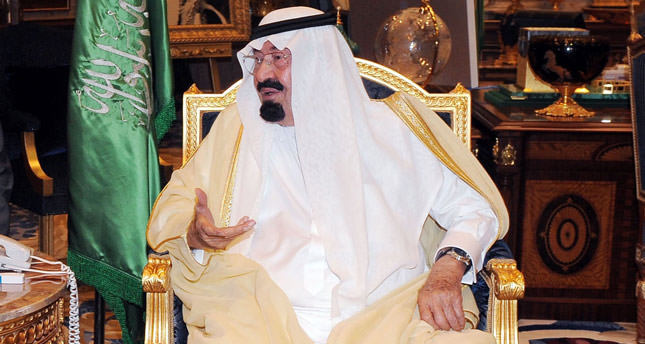 King Abdullah, the late king of Saudi Arabia, died at the age of 90 last week. The new king, Salman, is 80-years-old and his half-brother Muqrin, 72, has been announced as the new crown prince, meaning the period of elderly kings will continue in the country

Abdullah was a son of the first monarch of Kingdom of Saudi Arabia, King Abdulaziz al-Saud, who fathered more than 100 children. As the 13th son of Abdulaziz, Abdullah was born in Riyadh, at a time when the city was under the rule of his father. At the age of 11, Abdullah lost his mother Fahda bint Asi al-Shuraim, a member of the powerful Shammar tribe. She was the widow of Saud ibn Rashid, who ruled the Emirate of Jabal Shammar, an ally of the Ottoman Empire in the years before Saudi forces took over in 1921.

In the following years, Abdullah became the mayor of Mecca and served as deputy prime minister. He gained power and reputation as the Commander of the Saudi National Guard for 42 years. From 1982 to 2005, he was Crown Prince to King Fahd. Due to his half-brother Fahd's debilitating stroke in 1996, he acted as regent of the oil-rich kingdom for a decade, but officially ascended to the throne on August 1, 2005.

Similar to the Ottoman practice, the oldest member of the royal family succeeds the throne in Saudi Arabia, which is why kings in recent times are quite old. This practice means that crown princes have enough time to learn how to rule a kingdom, as the aged kings are busy with their deteriorating health. However, the king has the authority to select a crown prince. Abdullah outlived two of his crown princes, and later named Salman, Saudi Arabia's new leader, as his heir.

The former king placed the issue of tolerance at the center of his agenda, but at the same time, avoided diverting from Saudi Arabia's dominant faith, Wahhabism, while also fathering five sons and seven daughters. The seventh Saudi king, Salman, who took the throne on Friday, was a promising crown prince at an early age and has previously been assigned to prestigious positions. He governed Riyadh for 48 years and later became the country's defense minister.

Upon the death of Crown Prince Nayef, Salman was declared as the new heir. For the last couple of years, Salman was the kingdom's de facto regent because of Abdullah's worsening health. Adopting a diplomatic and tolerant approach, Salman prefers financial reforms to political ones, similar to the late king. Besides his royal duties, he controls a pan-Arab media company.

In 2010, he suffered from a stroke that has caused limited movement in his left arm, but rumors suggest he has also developed dementia. He has 13 children from his three marriages, and his son, Prince Sultan, is the first Saudi who went into space during a mission on the U.S. Space Shuttle Discovery.

Salman is the son of Hassa bint Ahmed al-Sudairi – who died in 1969 – a member of the influential Sudairi family and one of the favorite wives of Abdulaziz. Hassa gave birth to seven Saudi princes including Fahd. Around the kingdom, the seven brothers are generally referred as the Sudairi Seven.

The death of Crown Prince Sultan in 2012 sparked a fight for the throne. The young Saudi princes did not want to see Nayef as crown prince, who is considered a more conservative candidate. Prior to Nayef's funeral, the princes first argued with each other, then some of them drew their guns. In fact, a Saudi TV channel broadcasted the bitter dispute. Nayef was known for his anti-Shiite views and strongly supported the Yemeni and Bahraini governments against the protests by Shiites. Saudi Arabia's conservative prince was given a great deal of support by al-Shamri tribe, however, he died before his succession to the throne at the age of 77.

Only three members of the Sudairi Seven are alive now – Salman, Prince Ahmed (born in 1942) and Abdul-Rahman (born in 1931). Having studied in the U.S., Ahmed was appointed as the minister of the interior, which was seen a strong sign that he would be the crown prince. Although he was popular both with the public and his family, he resigned from his political assignments. The reason behind his reassignment was his opposition against the separation of the security forces into individual units. Ahmed's younger brother, Prince Muqrin (born in 1943), later became the crown prince.

Although his mother was an ordinary Yemeni, Muqrin is one of the most favorite sons of late Abdulaziz, and is believed to be a liberal. He studied aeronautics and was appointed as the director general of Saudi Arabia's intelligence agency. His interest in literature can be seen from his rich library, and his wife was previously the president of the Women's Council. In the near future, Salman may declare his younger brother Ahmed as crown prince.

Abdul-Rahman is the eldest surviving member of the Suadiri Seven and believes that he has been treated unfairly. As Abdulaziz's first son studying in the West, Abdul-Rahman received a Bachelor of Arts degree from the University of California and is a graduate of the California Military Academy. He currently runs a large food service company.

From governorship to kingdom

The Salafi – also referred to as Wahhabi – governors of the Riyadh region used to be subjects of the Ottoman Empire. However, they took advantage of the lack of authority in 1918 onwards, and dominated Saudi Arabia and Hejaz with the support of the British. Abdulaziz died at the age of 73 in 1953, and had several marriages that produced 150 children, 70 of whom passed away at a very early age; however, five of his sons succeeded to the throne. The new king is also the son of Abdulaziz.

There are approximately 4,000 princes in the royal family, most of whom have various positions in the state. Saud, the second king, was dethroned due to his extravagant lifestyle and died in exile in Athens, Greece in 1969. King Faisal, the second son of Abdulaziz and the third king of Saudi Arabia, lived from 1954 to 1975 and was the most popular name of the royal family. Excelling in three languages, Faisal acted as the minister of foreign affairs. Thanks to his political talents, he received great attention and increased his popularity in the Islamic world. He also attempted to revive the notion of the caliphate, but failed; yet, he still developed close relations with other Islamic countries.

He also embraced Salafism and encouraged the spread of its thought system. Faisal contributed to the foundation of the Muslim World League, which runs on donations from oil companies and individual Muslims. He also founded Islamic centers, madrasahs and mosques in Muslim countries. Moreover, he funded religious scholars and distributed books on the Salafi movement after they were translated into different languages. His wife was the daughter of an Ottoman military officer, and he did not have any other wives due to his deep passion for the woman he loved. In 1975, he was killed by his half-brother's son.

His successor, Khalid, became king at the age of 62. Ruling the kingdom from 1975 to 1982, King Khalid was an adherent of Islam. He ordered the execution of Princess Misha'al bint Fahd, the granddaughter of Prince Muhammad, who was an older brother of Khalid. Found guilty of adultery, the princess was executed by stoning. When Khalid died in 1982, his brother Fahd became the king at the age 60. He was interested in the art of aesthetics and did not listen to the demands of pro-Salafists, which included the destruction of the Qubbatul Hadra and the removal of manuscripts from minarets and prayer rooms.

While I was completing my doctoral degree in Medina, I had the chance to see both Fahd and Abdullah. Fahd attended the ceremony held after the restoration works were finalized at the Al-Masjid al-Nabawi, and the king was in a golf cart as he was unable to walk. Pro-Salafists now think that the royal family is concessive and too flexible toward their religious sect. This escalated in 1970 when the marginal group "Ihvan" attacked the Ka'aba, but their protests were only justly quelled.