Interesting Valentine’s Day traditions from around the world 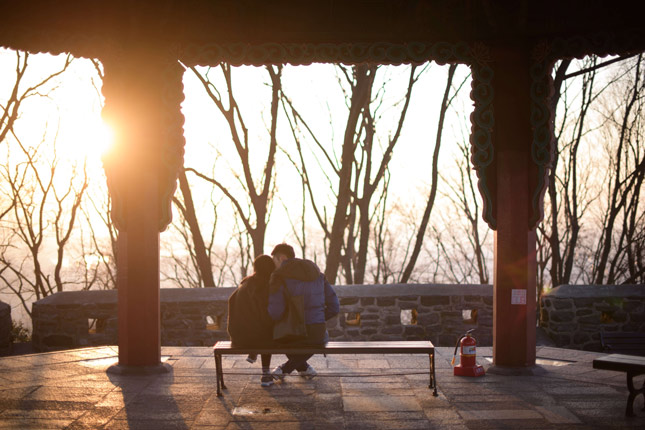 Dedicated to the memory of St. Valentine, Valentine’s Day is the occasion when people all over the world profess their love to their sweeathearts and get them gifts. But this tradition is not followed everywhere, as customs associated with the holiday and the ways of celebrating differ from country to country

With Valentine's Day, Feb. 14, just around the corner, stores are flooded with candy hearts, chocolates, stuffed animals and discounts for the perfect present for that special someone. These are the routines of holiday preparations, however the ways of celebrating the Valentine's Day differ from country to country. In most Western countries, shelves brimming with teddy bears and boxes of chocolate are typical Valentine's Day fare, but not every country turns to greeting cards and heart-shaped candies to declare love. Some exchange wooden spoons and pressed flowers while others celebrate – or mourn – their single lives over black noodles. Here are some interesting Valentine's Day traditions you might not have known from all around the globe.

1 Denmark: Celebrated only since the early 1990s, Valentine's Day is a relatively new holiday in Denmark. Feb. 14 in Denmark is embraced with a Danish twist, as instead of roses, sweethearts exchange pressed white flowers called snowdrops. Another popular Danish Valentine's Day tradition is the giving of "gaekkebrev," otherwise known as a "joking letter." Men give woman "gaekkebrev" consisting of a funny poem or rhyme written on intricately cut paper and signed only with anonymous dots. When the woman who receives the "gaekkebrev" can correctly guess the sender, she earns herself an Easter egg on Easter later on that year. If she's stumped as to whom her secret admirer is, she owes him an egg instead.

2 South Korea: Valentine's Day is a very popular holiday among young couples in South Korea, and variations of the holiday are celebrated all year round, especially from February through April. The gift giving starts on Feb. 14 when women spoil their men with luxuries. Adapted from Japanese tradition, the tables turn on March 14 when men shower their sweethearts with chocolates, flowers and gifts on a special day called White Day. On April 14, a month after White Day, single people who didn't receive any loving on Valentine's Day or White Day, celebrate or mourn on what is called Black Day. People without lovers meet up at restaurants to eat "jajangmyeon" a dish made of white Korean noodles with a black bean sauce, referred to as "black noodles." Some say this tradition of eating black noodles with other single friends is a celebration of single life while others see it as more of a consolation dinner or mourning for being single.

3 Wales: We won't find the Welsh celebrating St. Valentine. Instead, they celebrate St. Dwynwen's Day, the Welsh patron saint of lovers, on Jan. 25. Legend says that Dwynwen, daughter of King Brychan Brycheinog, lived in Anglesey in the fifth century and fell in love with a young man named Maelon. As all legendary love stories go, tragedy struck when the two were unable to be together. Dwynwen was said to be distraught and fled into the woods where she encountered an angel who gave her a potion to cool her love for Maelon. The potion did more than just that, turning Maelon into a solid block of ice. Dwynwen prayed and God granted her three wishes. She wished that Maelon be released from his icy tomb, that God watch over all true lovers and help them realize their dreams and hopes of true love and lastly that she would never marry. After being granted her wishes, Dwynwen retreated to a life dedicated to the Church as a nun on the island of Llanddwyn.

On the Welsh Valentine's Day, it is customary to give love spoons to your lover. This traditional romantic gift is an idea that started in the early 17th century when Welsh men carved intricate wooden spoons as a token of affection for the women they loved. Patterns and symbols were carved onto the spoons, signifying various meanings. For example, a horseshoe stood for good luck, wheels symbolized support and keys symbolized the key to a man's heart. Today, love spoons are still exchanged for celebrations such as weddings, anniversaries and new births.

4 Brazil: Brazilians skip the celebration of Valentine's Day on Feb. 14 and instead celebrate Dia dos Namorados, or Lover's Day, on June 12. In addition to exchanging chocolate, flowers and cards, music festivals and performances are held throughout the country. Gift giving isn't limited to couples as the celebration of this special day of love is done by exchanging gifts and sharing dinner with friends and relatives also.

The following day is St. Anthony's Day, which honors the patron saint of marriage. On this day, single women perform rituals called "simpatias" in hope that St. Anthony will bring them a husband.

5 Slovenia: Feb. 14 in Slovenia marks the first workday in the fields. St. Valentine or "Zdravko," as he's better known, is one of their patron saints of spring. There's a Slovenian proverb that says, "St. Valentine brings the keys of roots." It is an auspicious day to start working in vineyards and fields, as usually around this time of year one starts noticing the revival of plants and flowers. People in Slovenia also believe that the birds of the fields mate on this day, and to witness it, one must walk barefoot through the fields on sometimes still frozen ground. While this day is significant in the agricultural community in Slovenia, it isn't until March 12 on St. George's Day that the majority of people celebrate their annual day of love.

6 The Philippines: While Valentine's Day celebrations in the Philippines are similar to celebrations in Western countries, one tradition has swept the country and led to thousands of couples sharing a wedding day on Feb. 14. Mass wedding ceremonies have gained popularity in the Philippines in recent years, leading couples to gather at malls or other public areas around the city to get married or renew their vows. In 2012 more than 2,000 Filipino couples were married on Valentine's Day throughout the country.

7 South Africa: Like many other parts of the world, South Africa celebrates Valentine's Day with festivals, flowers and other tokens of love. It's also customary for women in South Africa to wear their hearts on their sleeves on Feb. 14. Women pin the names of their sweethearts on their sleeves, which is an ancient Roman tradition known as "lupercalia." In some cases, this is a way for men to learn their secret admirers by looking at the hearts on women's sleeves.

8 China: The equivalent to Valentine's Day in China is "Qixi," or the Seventh Night Festival, which falls on the seventh day of the seventh lunar month each year. According to Chinese lore, Zhinu, a heavenly king's daughter, and Niulang, a poor cowherd, fell in love, got married and had twins. When Zhinu's father learned of their marriage he sent his queen to bring Zhinu back to the stars. Upon hearing the cries of Niulang and their children the king allowed Zhinu and Niulang to meet once a year on Qixi.

During celebrations of Qixi, young women prepare offerings of melon and other fruits to Zhinu in hopes of finding a good husband to marry. Couples also head to temples to pray for happiness and prosperity. At night people look at the heavens and watch as stars Vega and Altair, which represent Zhinu and Niulang, come close during the star-crossed pair's annual reunion.

9 Turkey: Even though Valentine's Day is not among the top Turkish traditions, it has been celebrated mostly in big cities in the last 10 to 15 years as the result of the rising consumption economy. Major cities such as Istanbul, Ankara and İzmir get in the spirit of Valentine's Day by decorating shopping malls, restaurants and nightclubs and sometimes even streets with flashing red lights and romantic heart-shaped balloons. You might find old ladies on the street selling single roses at ridiculous prices and saying things like "give this to your sweetheart." It also goes without saying that you will find heart-shaped pastries, cookies and chocolates all over the city. Some clubs around Istanbul have special parties for Valentine's Day and you might even come across a Lonely Hearts party for singles on Feb. 14, organized for singles to mingle and have fun.