Moena: A hidden Turkish town in the foothills of the Alps 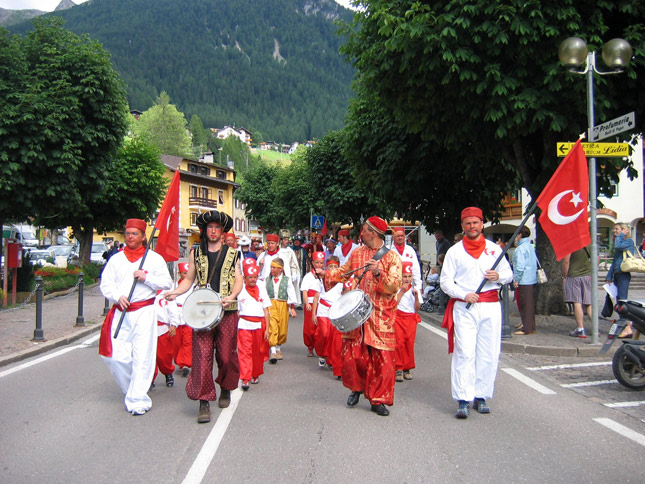 Located in the northern Italian province of Trentino, a small village called Moena, which is also known as ‘La Turchia’ by locals, has an interesting story that began when an Ottoman janissary escaped to the village in 1683 during the campaign to conquer Vienna

The traces of the Ottoman Empire, one of the most culturally rich and longest-lasting empires, are still observed in different parts of the world. Spreading across a vast amount of land from Anatolia, North Africa and the Middle East to the Balkans, the empire's inherited culture and lifestyle affected the lands where it conquered and ruled.

Therefore, it is not surprising to see Ottoman mosques, inns or madrasahs in the Balkans or the forgotten parts of Africa. However, an Italian town that holds Turkish festivals and hangs Turkish flags on windows might make an impact on even the most unimpressed. Located near the Italian-Austrian border, the Italian mountain town called Moena, also known as "Rione Turchia" (Turkish region), continues to keep Turkish folklore alive through the festival they hold every August, even though most of its locals have never seen Turkey before. This unbelievable and bewildering story started with a wounded Ottoman janissary who was left alone in a foreign land, far away from his home.

As the story goes, an Ottoman janissary named Hasan was assigned as an intelligence officer in the Ottoman army thanks to his knowledge of Russian, Italian and German. His talents were discovered during the Köprülü era and he stood out among the janissaries, the elite infantry forces in the Ottoman army, and made a name for himself. According to Turkish author Orhan Yeniaras's book "El Turco," Hasan visited Venice, Vienna, Berlin and Rome many times, usually disguised as a Christian priest, to gather intelligence.

Hasan's life and career completely changed when Grand Vizier Kara Mustafa Pasha asked him to gather information about the 12 Ottoman agents that had gone missing before setting off for the Second Siege of Vienna in 1683. However, as the grand vizier delayed the attack on the Austrians, the Ottomans eventually lost all chances to win the battle. Hasan confronted the grand vizier and criticized his decisions about the attack and timing of the siege. Hasan's courageous confrontation had a price, however; the grand vizier ordered executers to behead him since it was not appropriate for a janissary to question the decisions of a pasha in the Ottoman army. Fearing for his life, Hasan managed to escape with a little help from the head of the janissary troops and traveled for almost 200 kilometers before reaching a safe heaven: Moena.

Those who are familiar with the Italians and their culture probably know the expression "Mamma Mia li Turchi" (Oh My God, the Turks!). Italians have used this expression since Mehmed II conquered Otranto, an Italian coastal town. Although the Italians were afraid of the Ottomans back then – after all, the Ottoman Empire was expanding its territory all across Europe – the people of Moena offered a helping hand to the wounded and lonely Ottoman janissary without questioning his intentions. The doors of their houses were opened to welcome Hasan until the day he recovered. Hasan, a deserter, had nowhere to go and nobody to turn to except these kind people who showed mercy on this stranger. Far away from home, Hasan, also known by the town as "Il Turco," became one of them and even married a local Italian woman. As he could speak Italian, Hasan easily got on well with the locals and he shared his experiences and Turkish traditions with them. One day, Il Turco's quiet town got in trouble with the Duchy of Augsburg, which demanded high taxes from them. Hasan, a Turk who was keen on his freedom, objected to the demand for more money and encouraged the locals to revolt. This led the people of Moena to fight and defeat the Germans, and Hasan was declared the town's hero.

After Hasan died, his children and grandchildren kept his memory alive in this small Italian town. His memory and fascinating story has inspired many more afterward as well. This legend has been transferred from one generation to another and is still celebrated during the Moena Turkish Festival. The festival takes place during the first week of August each year. The locals dress up as Ottoman janissaries, hang Turkish flags on their windows as well as the streets and the eldest of the town is crowned as the sultan, embodying Il Turco.

Having embraced Turkish culture and traditions, today, the people of Moena consider themselves Turks despite the fact that they do not speak a word of Turkish. They adopted Turkish culture so holistically that they even demand dowries for future brides. Moreover, if a woman wants to marry a man from another village, she needs the sultan's approval, which is called "Alabastia."

As J. P. Roux once wrote, Turkish culture and language have a unique gravity; this force pulls people to itself no matter how different they are from the Turks. The inhabitants of Moena have been living like Turks for over 300 years. They continue to perform Ottoman traditions that have been long lost for the people of Anatolia. In turn, they show their gratitude to their local hero who came from a foreign land three centuries ago through these traditions and the festival they hold every year.