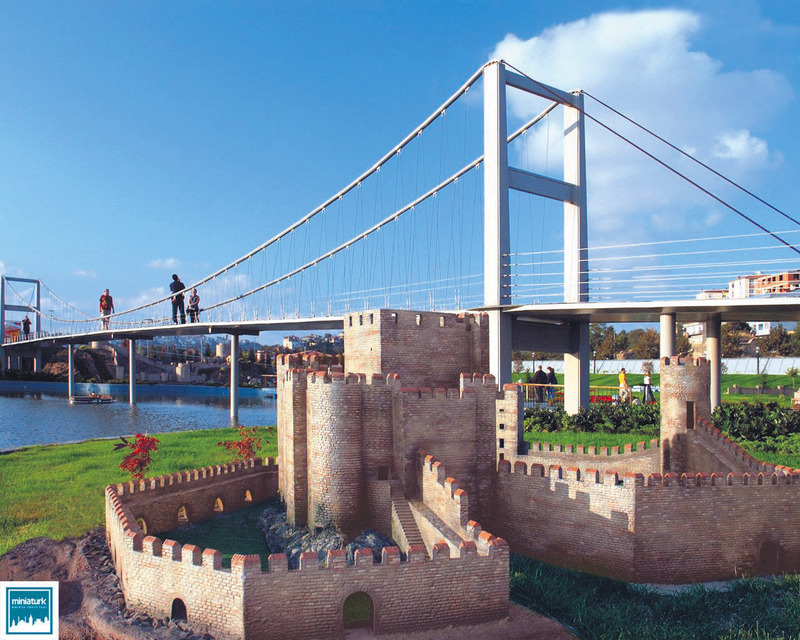 With the weather slowly warming up, it might be time to leave your homes to explore the many recreational opportunities Turkey has to offer. These include the fascinating and intriguing miniature parks scattered around the country

Formed in 2001, MiniatureArt has been making miniature models of historic and famous buildings in a 4,500-square-meter indoor space with the help of architects, sculptors, painters, computer specialists and designers. Being one of the largest miniature and model production facilities in Europe, the miniature models made here are nearly perfect renderings of the originals and are exported to many other countries. Considering that the works are exhibited in open-air miniature parks, quality control is done at every stage of production to make sure the models aren't damaged by weather conditions and can last at least 40 years. MiniatureArt must ensure stability, which is an important issue. Sometimes a miniature model can be 18 meters in height and range from 3-6 tons in weight; this means the models have to be extra durable and stable. MiniatureArt has produced more than 1,000 miniatures for eight different miniature parks and miniature model museums since the day it was established. With regard to the work done by MiniatureArt, each model is made in a unique way and has its own special properties. After the main structures of the models are made, the last stage of production is the part they call "bringing to life" where the models are painted and fixed into place.

Here are the parks where you can find MiniatureArt miniature models in Turkey.

Miniaturk is a miniature park situated on the northeastern shore of the Golden Horn in Istanbul. Covering a total area of 60,000 square meters (650,000 square feet), Miniaturk Park is one of the world's largest miniature parks with its 15,000-square-meter model area. The models express the variety and richness of the cultural traditions of various Anatolian civilizations and especially Ottoman grandeur. The park contains 122 models done in 1/25th scale, 52 being from Anatolia and 12 from Ottoman territory that is today outside of Turkey. The locations of these miniature models in Miniaturk are arbitrary, as there is no designed relation between them considering their historical and geographical position. You might just find Hagia Sophia right next to the Temple of Artemis. This approach in Miniaturk is what makes it differ from other miniature parks in the world.

While examining the unique and tediously built models, you will be able to find audio guides in front of each structure that provide descriptions and background information about each miniature building. Some of the best models are the Ataturk Airport complete with planes, the Atatürk Olympic Stadium with cheering spectators and the extremely detailed mosques.

Miniaturk Park first opened its doors to the public on May 2, 2013. Since then it has been a constant attraction to tourists and a must have field trip idea for school children. With an excellent play area for children, a restaurant, snack stands, a gift ship, a helicopter simulation ride, huge chess board and a maze, Miniature Park is the best way to spend your weekend. There is also a mini train ride around the pool in the park where you can let your inner child come loose and have a blast!

Located in Konya, the Around The World in 80,000 Theme park opened to the public in April 23, 2014, in celebration of youth and sports day. In just four months of operating, the park had a total of 250,000 visitors from all over Turkey.

With 20,000 square meters and a total of 120 miniature models, the Turkish World section is made up of the most important architectural masterpieces in the region extending from Central Asia and India to the Balkans.

The second section is the Tale Village, which is a favorite among the little visitors to the park. It is a magnificent area with 160 different characters that we know from 25 different tales and cartoon films. The 13,000-square-meter area is a place worth seeing, that all kids will love. The dinosaur section of the park is the most visited part. Otherwise known as the T-Rex Park, there are 50 dinosaurs in the 11,000-square-meter area. There are many different types of dominant dinosaur types that lived in the prehistoric period – 225 million and 65 million years ago and here is the place to see a few of these interesting creatures. Most of the -not so miniature- miniature dinosaurs are fully moving robots! The biggest moving creature in the section is the Seismosaurus, which is 45 meters in length. Make sure to put this exciting and unique park on your schedule when you decide to take a trip to Konya!

In Antalya, the Minicity culture and entertainment center features miniatures of outstanding architectural works of art from thousands of years of Anatolian civilizations, ranging from antiquity till today. All the miniatures in Minicity have been created as a result of fastidious research, surveys and photographic studies. There is a total of 86 miniature models in Minicity that have been scaled down to 1/25th their original size with the help of model making specialists. On entry, you will receive a booklet with details of each building, and you can also purchase an audio version that you can listen to while walking around. The audio versions also come in Russian and German along with English and Turkish. While walking around the park with its nostalgic atmosphere, you will rediscover unique works of art from Anatolian civilizations. In particular, there are quite a few exhibits from the Antalya region, including Hadrian's Gate, which was built by the people of Antalya in memory of the Roman Emperor Hadrianus' visit. There are also miniature models of the Aspendos Theater, which was designed by the architect Zenon, Mount Chimaera, which was a place in ancient Lycia, and the original St. Nicholas Chapel that was built after the death of St. Nicholas, who is claimed to be the original Santa Claus. This park, which is redolent of Turkey's rich history, has some of the most intricate and beautiful miniature models in Turkey and is a place worth seeing, whatever your age may be.
Last Update: Mar 07, 2015 11:35 am
RELATED TOPICS