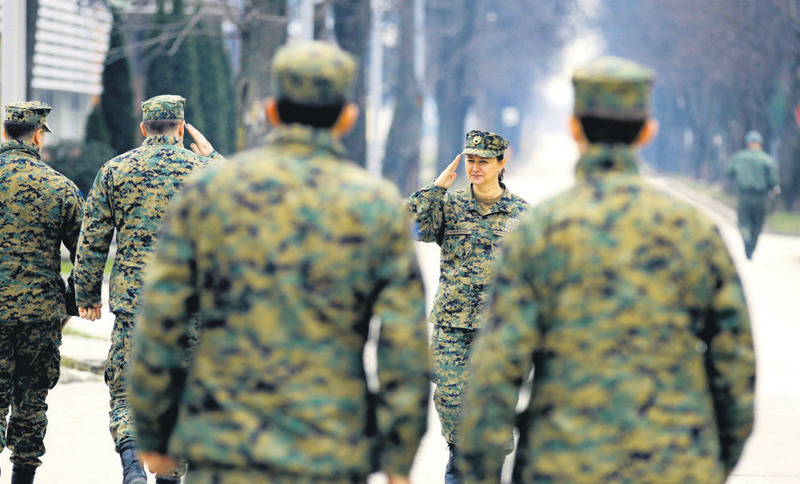 The remarkable wartime career of Bosnia-Herzegovina's highest-ranking female army officer has "opened the door" to women wanting to take an active role in the military life of the Balkan country.

Fifty-one-year-old Brigadier Mersida Mesetovic is part of the 6 percent of women who serve in the country's 16,000-strong armed forces.

A veteran of the bitter 1992-1995 Bosnian War, Mesetovic – who earned the rank of brigadier in 2011 – spoke to Anadolu Agency about her exceptional life and career, which has spanned from the Yugoslavian era to the present.

Today, many modern armies encourage women to take an active role in peacekeeping missions in conflict zones around the world, in stark contrast to 30 years ago when women were not even part of an active-duty force. Now a senior official in Bosnia's defense ministry, Mesetovic's career started before the country's army even existed.

Having studied people's defense at the Faculty of Political Sciences in the former Yugoslavian capital of Belgrade in 1987, Mesetovic was barred from front-line duty simply because of her sex.

At that time, Bosnia-Herzegovina was part of the socialist Federal Republic of Yugoslavia, which had a unitary Yugoslavian People's Army.

"At that time, it was the only faculty that allowed women to become part of the defense system as reserve officers. Women did not take part in active duty in the former Yugoslavian People's Army. After completing studies and military training, which was an integral part of the studies, females received the rank of reserve officer," Mesetovic told.

Since beginning her career 30 years ago, Mesetovic – now a married mother of two – became one of only two female brigadiers in Bosnia-Herzegovina's armed forces, only one rank below that of colonel.

When Yugoslavia collapsed and war broke out in 1992, the national army dissolved and Mesetovic joined the newly formed Bosnian army. It was with this force that she was able to become a battle-hardened soldier, fighting on the front lines throughout the entire three-year war. After the warring parties signed the Dayton Agreement to end the conflict in 1995, Bosnia was divided into two entities. Mesetovic took an active role in forming the new Federation of Bosnia-Herzegovina's army, which was later integrated into today's Armed Forces of Bosnia-Herzegovina.

Mesetovic said that the discipline necessary in her profession became part of her private life. "Training influences everything. When you spend eight hours at work where you must be fully organized, where you must stay longer or come earlier, you simply must organize your life in a way that allows you to give everything to your private and professional life," she said.

Discussing the balance between men and women in the army, Mesetovic said that, as in every other profession, there is antagonism between the two sexes. However, through wartime experience men "eventually" grew accustomed to working with women.

"My generation [of women], which currently takes part in the armed forces, spent time with men in the war. Our male colleagues got used to us," she said. After spending years together on the front lines, men adapted to the idea of female soldiers, and today "there is no difference" in the army between them. According to Mesetovic, women's efforts during the war in Bosnia opened the door to a younger generation of girls who are becoming a part of today's army. "In every new generation there is certain percentage of female colleagues. By struggling to be part of the system, to do our job professionally, to prove that we can do it well, we have opened the way for a new generations of girls. Now, it is a generally accepted fact that men and women serve jointly in our mission," she said.

Mesetovic thinks women have to offer more if they want to progress in this profession. "If you want to be successful, certainly you have to exert greater efforts than your [male] colleagues do. You have to struggle for your place, which is definitely exhausting. And you have to find a way to organize yourself in order to be in top shape," she said. If women want others to look at them solely according to how professional they are, then they must impose it, she believes. "That's what we are looking for. To be recognized by the work we do and the quality of performing it," she said, adding, "Work demands nothing more than professionalism."

Today, women in Bosnia-Herzegovina's army can earn every rank except the highest – that of brigadier general. Mesetovic's career peaked as one of the highest-ranking female in the army today, but in accordance with military law, she will retire at the age of 55.
Last Update: Mar 12, 2015 1:15 am
RELATED TOPICS