Men in support of women in search of equality 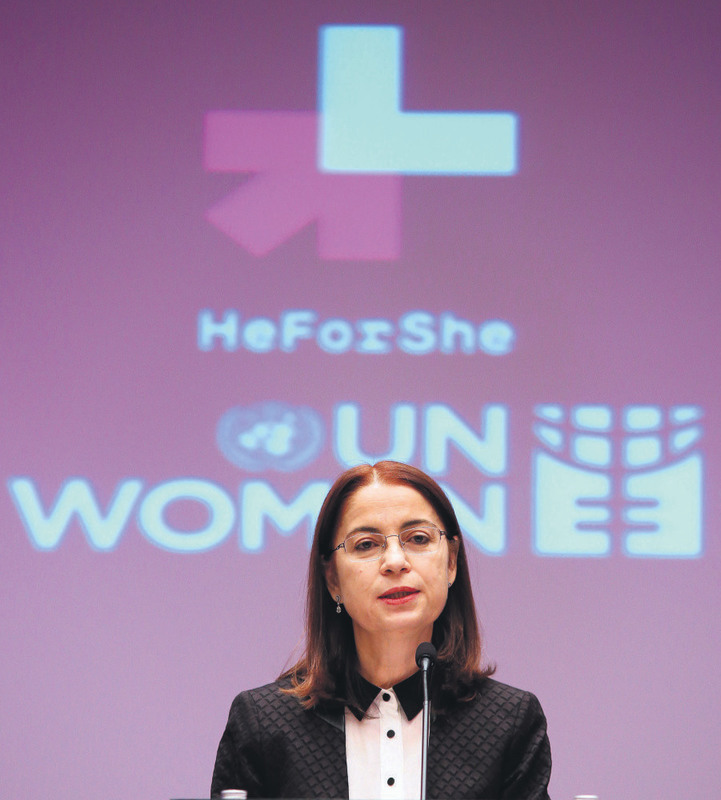 March is here again, and with the arrival of this month, issues that directly affect women come to the agenda. This week, New York is buzzing with conversations on matters directly concerned with women

For the past four days, hundreds and thousands of women have gathered in New York City. The occasion is the 59th convening of the Convention on the Status of Women at the United Nations. Women from all over the world have come to discuss every matter that interests and effects women throughout the world. Hollywood and Bollywood stars are here; ministers concerned with the economy, the environment, social policies and leaders of nongovernmental organizations (NGOs), large and small have come together to discuss what concerns them most. The colorful costumes, the chatter in every language in the world add to the enthusiasm and international atmosphere.

However, under the bright colors and humming activity, serious conversations are being held. Quite often the "battle for gender equality" is being discussed. But the battle lines, drawn so many years ago, have become softer. What women want when discussing equality is not being the same as men, but having the same rights as men, the same opportunities and the same treatment, with an understanding of the differences inherent in gender. Only with this approach can the gender gap, which leads to women being deprived of having the same rights as men, be closed.

This year the emphasis is on two matters. The first is the involvement of men in finding solutions. The second topic is how to prevent domestic violence.

For decades women have been addressing women; at times, a stringent argument emerges, and this has frightened some men off. However, there are others who know that women are not seeking to replace men. They simply want a place and role that is equal and fair.

Indeed this realization was reflected recently with the start of the HeForShe Campaign. The campaign states: "Now it is time to unify our efforts. HeForShe is a solidarity movement for gender equality that brings together one half of humanity in support of the other half of humanity, for the benefit of all."

It is only by engaging men that women can ensure for themselves equal treatment, pay and rights. Many gains have been made, but there is still a long way to go. A simple example from one meeting on the media and women's rights pointed out that women have fewer leading roles in films than men, something most of us are aware of. But how aware are we that the technicians behind the scene are predominantly men, and even more thought-provoking, that on average only 17 percent of the crowds in crowd scenes in films consists of women. This does not reflect reality. Women certainly do join crowds in the real world.

Another frequent topic at CSW 59 this year has been how to combat violence against women, domestic and otherwise. One innovative approach has been the introduction of new phone apps which allow a woman to get help in an instant; these have been introduced in India as well as some other countries. There are phone apps which help a woman to make the decision to leave a destructive relationship, and to maneuver through the most dangerous point in an abusive relationship - when the woman tries to extricate herself. There are also new and old ideas on how to help women stand up and combat violence, be it inflicted in a relationship or by a stranger on the street.

However, what is being discussed this year is something that perhaps one would think would have been discussed much earlier. The role of men in combating violence against women. Women are the victims, and how much can a victim do to help themselves? They can extricate themselves from a situation, protect themselves or others, but they cannot put a halt to the disease. It is the person who creates the violence who must stop – this much is clear.

Perhaps the reason men are only being included in the conversation now is that many did not realize how great the problem was. But the statistics are stark. In Australia, a developed country, a country in which society is seen to function at a high level, two-thirds of women are victims of violence by their partner. That is, two out every three women in Australia have been physically or emotionally victimized by their loved ones.

In a recent survey 61 percent of respondents in Australia agreed that tracking a woman without her knowledge by her cellphone is not acceptable. That means 39 percent think that this is ok. This is the mentality we are faced with. Perhaps the majority of these 39 percent would say that being physically violent to a spouse is not acceptable, but it is not the actions that need to be dealt with; it is this mentality. That "tracking" another person by any means, without their knowledge, can in anyway be acceptable is a mindset that can only lead to more violence. It is a denigrating mindset in which the woman is seen as someone who needs to be protected without her consent.

The issue is centered on consent here. Women have to be recognized as being able to make their own decisions, and to be informed of anything that is done "in their name." Indeed, nothing should be done in anyone else's name without their explicit consent or knowledge.

At one of the many meetings on preventing violence against women I was fortunate enough to sit next to a retired judge this morning. She has worked in a number of countries in dealing with domestic abuse, both as an advisor to NGOs and as a judge, thus being at the solution end of things and the punishment end. Her conviction is that it is vital that we include men in the solution. If we want to try to prevent the problem rather than "cure" it, it is essential that men are included. The violent reactions of men which lead to domestic abuse are often correlated to these men having grown up in an abusive environment; however this should not be oversimplified. Many men have experienced negative childhood situations, but have grown up to be care givers and kind and caring husbands and fathers; this is a reaction against what they have experienced. More often, the root of the problem can be found in stress or depression caused by unemployment or job-related problems. Thus, the way to prevent such problems are to deal with the perpetrator, not the victim. Men who are abusive should have access to counselling, helped to find employment and provided with

the ability to pursue alternative life styles. The women also need support and family communication needs to be ensured.

The problem that exists in Turkey is no greater than in any other country in the world; it is certainly not in the top 10. In fact violence against women in Turkey happens less than in many countries. Recent "growths" in cases are related more to an increase in reporting. According to the eminent judge, the numbers do not change in reality. Any changes are most likely related to reporting habits. She gave me two examples of societies in which there was no domestic abuse - based on anthropological research; these two societies were both small and in developing countries. One, in the Far East, consists of a society in which the women work, selling crops while the men look after the children. The other society is one in which women market their own products, and keep what they earn. From this, it would be reasonable to extrapolate that economic independence is one way to establish a more harmonious society.The message this year is clear; women want to have equal opportunities and they want to be safe. There is much more to gender issues, but this year, these two points have come to the fore. Women in war zones are a different matter, beyond the scope of this article. But the destruction of the glass ceiling and the establishment of equal pay and opportunities, and the reduction, if not total elimination, of domestic violence are goals that need to be met as soon as possible. In order to ensure this, men need to become involved and active, working alongside women. There are many steps that need to be taken on this path, including educational methods and styles, the destruction of stereotypes and cooperation. But the inclusion of men in preventing violence against women is possible. And it is achievable if people – men and women – can learn to work together for a common goal. There can be no greater common goal than equal opportunities, as this will benefit both men and women, economically, socially and psychologically.
Last Update: Mar 14, 2015 2:24 am
RELATED TOPICS