Oil is down but art is booming in Dubai 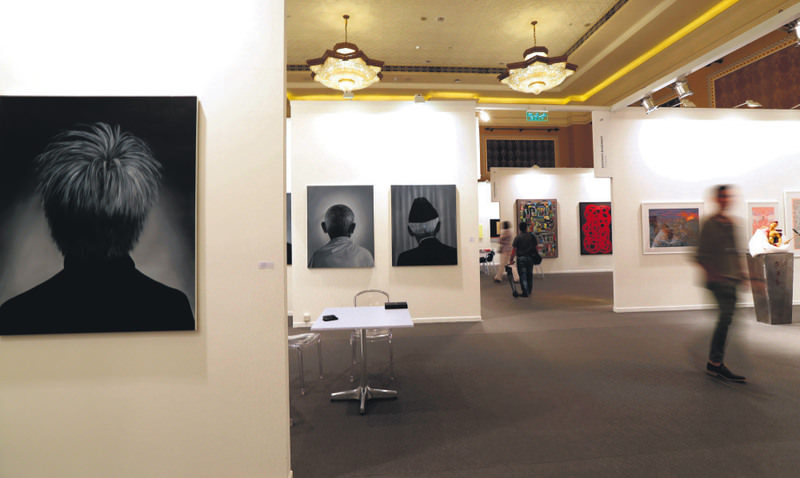 The demand for oil may be weak, but the demand for oil paintings remains strong as witnessed from the success of Art Dubai. Art Dubai is increasingly the most important annual art show for Middle Eastern and North African artwork, which also includes Turkish galleries

The price of oil is hovering around $50 a barrel, the price for other commodities is declining and the dollar's value is strong against international currencies. Against this global economic backdrop, Art Dubai, which ran from March 18-21, marked a successful art event that included the participation of 91 galleries with almost one-third of them from the Middle East and North Africa.

Turkish galleries have traditionally been well-represented at Art Dubai. In 2013, Art Dubai drew five Turkish art galleries. This year, two Turkish galleries joined the show: Istanbul's Pi Artworks, which made its second consecutive appearance, and another Istanbul-based art gallery, Sanatorium. "The interest in Istanbul is always so strong. People stop by to see what contemporary artists we are representing. Gulf art enthusiasts enjoy Turkish art, so that gives us some natural momentum," explained Feza Velicangil, Sanitorium's director. Ali Guerli, the chairman of the Istanbul Contemporary Art Fair, also attended the opening of Art Dubai. Guerli was also a key speaker at the Art for Tomorrow Conference in Doha, which finished just prior to Art Dubai.

Velicangil also found parallels between Istanbul, one of the Islamic world's oldest cities, and Dubai, one of the Islamic world's newest cities. "Some of our artists are addressing the rise of the city and its conflict with tradition. This is something people in Dubai understand and appreciate because they are going through the same thing we are in Istanbul," he said.

This year, Sanatorium's booth at Art Dubai featured work from artist Ahmet Doğu İpek. İpek's artwork often features seemingly endless and interlocking towers and structures reaching into the sky – symbolism that seemed a perfect fit for Dubai, a place home to the Burj Khalifa – the world's tallest building – and the sprawling sky-scrappers of Sheikh Zayed road.

The region's shared artistic language was demonstrated in the most popular art work at the fair, "Intersections" by Pakistani-American artist Anila Quayyum Agha. The piece featured a lantern-like object: A laser-cut wooden cube that projected an Islamic shadow pattern onto the gallery's walls and floor inspired by Andalusia. Since the 2008 financial crisis, some banks have shown greater hesitancy with regards to their involvement with the art world. In Europe, Germany's Commerzbank has divested itself from art, and Deutsche Bank quietly closed the Berlin branch of the Guggenheim Museum it had supported for 15 years in 2013. In the Gulf, despite the low price of oil, the involvement of the financial sector in the cultural sector remains strong.

Art Dubai features the unveiling of the Abraaj Art Prize from the Abraaj Group, which this year went to a single recipient instead of the usual five. Instead, the company has channeled more funds into the Abraaj RCA Innovation Scholar program at the Royal College of Art in London. The program funds two years of art education for promising artists. One of the first five recipients of the award was a Turkish artist. Julius Bar, the Swiss Private Banking firm, was one of the sponsors of the Art Dubai event, and hosted several side events during the fair. Ayman Abuhabsa, who represents Mashreq Bank's private banking wing, conceded the pairing between art and the financial world is not a natural one. "There is no overriding reason a bank should invest in art as an asset class." Abuhabsa explained.

Instead, Abuhabsa framed his company's involvement with Art Dubai as more about supporting the diversification of the event. This year, Mashreq Bank supported the modern art hall at Art Dubai. "As we have seen in the past with art fairs in Basel and Hong Kong, the interest always starts with contemporary art. But as the interest increases and the base widens, there is more interest for modern art." Abuhabsa explained. He also suggests there is a business case for including modern art in the fair. "Modern art is more established. When selling art in this category, there is a greater chance for liquidity and the price valuation of the artwork is more established."

This year for the first time, the modern section included a large section of African art as well. While in Western markets, African or Asian art is often sold on its "exotic" factor, this is not the case at Art Dubai and in many galleries in the Middle East. Carlos Cabral Nunes, the manager of Perve Galeria in Portugal, which specializes in art from Lusophone Africa, believes Art Dubai offers an alternative model. "I am against creating specific art fairs just for African art; such fairs risk becoming art ghettos. One of the great things about Art Dubai and other venues in the Middle East is that all art is equal" he said.

Less than a decade old, Art Dubai attracts some 500 artists each year, and the event is about more than selling art. Many artists in attendance also join the Global Art Forum, co -directed by Middle East affairs commentator Sultan Sooud Al-Qassemi, which takes place during the event and includes discussions on art and urbanism.

Nigerian artist Bruce Onobrakpeya was one of the African artists who attended Art Dubai this year. His work has sold for record prices in his native country, and his work was well received by visitors to the modern art pavilion. The economies of both Nigeria and the United Arab Emirates hinge on oil, and he offered this commentary about the interplay between art and oil. "When the price of oil drops, there is always changes across the economy. But one day, oil will run out. When that happens, we will still have art. Culture and art are eternal," he said.
Last Update: Mar 23, 2015 1:08 am
RELATED TOPICS