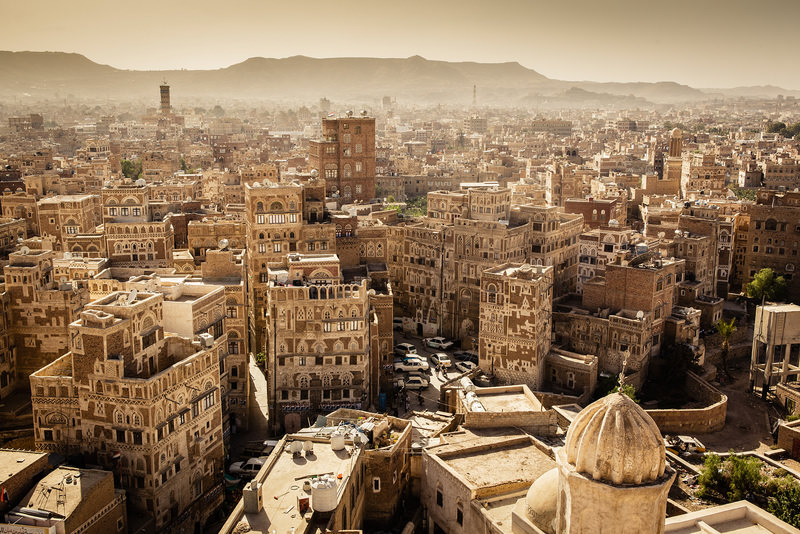 Being a cradle of some of the world's oldest civilizations, Yemen has not been able to establish a stable political structure for almost a century due to its divided groups. Now, the country is experiencing another bloody civil conflict followed by yet another foreign intervention

Known for its coffee and moccasin-style shoes called "yemeni" in Turkey, Yemen was once the cradle of world's oldest civilizations. The great story of Yemeni Queen of Sheba, who married Prophet Solomon, makes the country more famous.

Centuries before, the fertile and greenery region surrounded with dams and natural water sources was home to the wealthy Himyarite Kingdom. However, this remarkable civilization perished after a violent flood and the destruction of the Ma'rib Dam.

Representing the ancestors of Arab people, the Yemeni tribe "Qahtani" spread around the world. The Curhum tribe of Mecca, the tribe of Evs and Hazrej tribes in Medina, the Kingdom of Hira in Iraq and the Kingdom of Ghassan in Syria came from the same Yemeni tribe referred above. Over years, Yemen flourished again, yet was unable to return its glorious days.

Afterwards, the region was dominated by Ethiopia. Abraha, who advanced toward Mecca with his elephants one year before the birth of Prophet Muhammad was the governor of Yemen under Ethiopian rule. Yemen was also one of the first regions that accepted the invitation of Islam. Prophet Muhammad once said about it: "May Allah bless Damascus and Yemen for us!". Ali, Prophet Muhammad's cousin and son-in-law, and Muaz bin Cebel served as the governor of Yemen. The region turned out to be a science and civilization center, where numerous scholars trained.

In the 16th century, the Pope was boasting about the library of Vatican which gathered 10.000 books for the first time. However, the library of Malik Davud in the Yemeni city of Taiz had already 100.000 books early in the 14th century. The rate of literacy in Yemen always high thanks to a simplified teaching method of writing. Centuries later, this technique was adopted to the Ottoman schools by Sultan Abdulhamid.

When the ports of Yemen, which were taken under control by the Ottoman Empire since 1516, were threatened by imperialist Portugal they were taken under the protection of the Ottoman Navy on call. Then later declared as an Ottoman province. In 1591, a man who proclaimed himself as Zaidi Shiite Imam, came out in the city of Sana'a to rule the region. Yemen became a problematic area due to British-backed revolts at the end of the 19th and early in the 20th centuries. Thousands of Ottoman soldiers died while they were trying to stop rebellions. Many of them already passed away during their passage to Yemen. Some soldiers died of unfamiliar desert climate or contagious diseases.

At that time in Anatolia, there were hardly any families whose members did not fight in Yemen. Ottoman soldiers, who were unable to return their homeland due to wars, were settled down in Yemen and married local women. There are Turkish-speaking Yemeni people whose ancestor was an Ottoman soldier. Today, 55 percent of the 12 million Yemeni population belongs to the Zaidi order of Shiite Islam and others are Shafii Muslims. There are also some Shia Ismaili Muslims. Most of Zaidis live in the north of Yemen, while the Sunni population is settled down in the southern parts of the country. Besides, the country is home to a group of Turkish-origin Hanafi locals.

Zaidiyyah is a moderate Shiite sect. It is claimed that Zaidiyyah has a connection with Zayd ibn Ali, the grandson of Husayn ibn Ali. However, such claims are not correct. Some evil-minded people who attempted to look as the supporters of Imam Zaid revolted against the state, but failed. Imam Zaid, who was incriminated, was killed in 740. Zaidiyyah spread on the north of Yemen, notably Sana'a and its neighborhoods. Zaidiyyah has similarities with the Hanafi sect of Islam. In terms of Islamic theology, it shares the same principles with Mu'tazila. Compared to the Jaʿfari school of thought in Iran, Zaidis recall Umar and Abu Bakr with respect. They believe the caliphate belongs to Ali and his son. They are loyal to the caliph, but never neglect the Imam. Zaidis also believe that those who commit a big sin, but do not repent, will stay in eternal hell. They do not eat animal meat that is cut by non-Muslim and also do not marry the women of the people of the Book.

When the Committee of Union and Progress (CUP) gained power in the Ottoman Empire, Yemen acquired privileged status. Following the World War I, British soldiers occupied the northern parts of Yemen from 1918 to 1924. Yahya, the last Imam of Yemen, was loyal to the Ottomans during the war. When the northern Yemen declared its sovereignty, Yahya continued to keep relations strong with the empire, but his efforts were in vain. Saudis occupied the Asir region on the north of Yemen.

In 1839, Britain occupied the Port of Aden that was a strategically important natural port positioned on the trade route to India and was ruled by Abdeli Sultan subjected to the Ottoman Empire. By the time, Britain dominated the south of the country, which is also called Hadhramaut.

After a bloody 1962 coup d'etat with the support of Egypt, the Imams were overthrown and a republic was proclaimed on the North of Yemen, which was ruled by monarchy. The country was locked in a civil war between socialist republicans and pro-monarchy supporters four years later. Gamal Abdel Nasser Hussein, the second President of Egypt was on the side of socialists and Egyptian air forces used chemical weapons in Yemen. On the other hand, the King Faisal of Saudi Arabia supported the pro-monarchy group. The republicans won the war and the Yemen Arab Republic was proclaimed. Following the withdrawal of British forces in 1967, Southern Yemen became independent as the People's Republic of South Yemen, but turned out to be a satellite state of the Soviet Union. Egypt, Syria, the Southern Yemen formed the United Arab Republic.

The unification of south and north Yemen took place in 1991 after long-continued efforts. However, the tension was always high around the country due to its strategic position and ethnic structure. Another Russian-driven civil war waged three years later in1994. Although the U.S. tried to intervene in the situation, due to the rise of al-Qaida, the American authorities immediately kept their hands off the area and left the country into a mass.

Amidst the Arab Spring, the Iranian-backed Shiite militias staged a revolt to support Yemen's former Zaidi Shiite President Ali Abdullah Saleh, who had been in power since 1978. The Houthis is rebellious group, which has existed among the Zaidi Shiite university students in Yemen since 1992. The group takes its name from Hussein Badreddin al-Houthi, who led the group's armed activities. Coming from a different section of Shiites, the Houthis has been secretly supported by Tehran for 10 years. Reaching the Mediterranean Sea through Iraq, Syria, Lebanon (Hezbollah) and Palestine (Hamas), Iran aims to access the Indian Ocean through Yemen and Bahrein. Iran intends to revive the historical Persian Empire. While the world is busy with Israel, the U.S., the EU and al-Qaida, this fact is underestimated. Neither the Arab League, nor the West appears to accept an Iranian base there. Who knows when the vulnerable and poor Yemeni people living in a land, once the home of the world's oldest civilizations, will find peace?