Shedding light on life in a Harem through Ottoman times 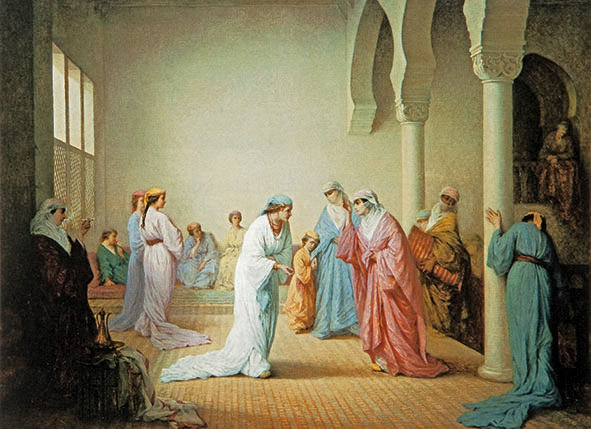 Concubines in the Ottoman Empire have always been an engaging and controversial topic. A new book published by the Directorate of National Palaces purports to clear up the daily life and situation of concubines in the light of the findings revealed by historical documents

Written by Cengiz Göncü, the book "Osmanlı'da Harem ve Cariyelik" (The Harem and Concubinage in the Ottoman Empire) offers insight into the life of concubines at the imperial harem through historical documents and extensive study. The book was prepared by the Directorate of National Palaces under the Turkish Grand Assembly and published as a part of the Istanbul Kültür A.Ş. Culture and Civilization Series. Readers are provided information on why the Ottoman Empire adopted the practice of concubinage, how the concubines were chosen and how they were treated at the palace.

The book introduces more than 60 documents in Ottoman Turkish and begins with general information about the harem. According to Ottoman tradition, the harem was forbidden to strangers because it was also the home of the emperor, his mother who was known as the "valide sultan" (equivalent to queen mother) and his sons – referred to as "shahzade." Some foreign travelers tried to unravel the secrets of the harem, but everything happened behind closed doors. They described the harem with the help of their visionary images. This is a chief reason why there are differences between orientalist paintings and the historical accounts about the imperial palace.

In his book, Göncü said the concubines at the harem were offered good living conditions. If one of them did not want to stay at the palace and marry someone else, she was immediately sent to marry someone out of the palace. She was also given a house and money. There were hardly any concubines that were forced to stay at the imperial palace. As Islam encourages giving freedom to slaves, white concubines could get a document of emancipation after they served for nine years. The practice was also adopted for African concubines who had to serve for seven years.

Ottoman emperors chose their wives among Christians until the 14th century and began to prefer Muslim women in the 15th century. Following the first half of the 15th century, the empire dominated the neighboring states and principalities, which ended the marriages between different dynasties. During the reign of the Süleyman the Magnificent, marriages with concubines turned into a custom. However, when Süleyman had a religious marriage with his beloved concubine Hürrem, society did not accept it.

Each room in the harem had a different number of concubines, changing according to their status. When concubines were brought to the palace, they were offered daily wages. This practice continued until the end of the Tanzimat era. Afterwards, they were given monthly wages.

Historical accounts show that valide sultans forged political collaborations with statesmen and senior-ranking soldiers to sustain their power. In the 17th century, the harem became the main location of a power struggle. Different groups emerged and the sultanas fought each other to throne their own sons. Valide sultans took an important role to maintain the Ottoman dynasty. They tried to protect the lives of the emperor's sons, which was a difficult yet vital responsibility.

With the arrival of the 19th century, the effects of Westernization were felt in the Ottoman court music, and playing the piano as well as the mandolin came into fashion. During the Tanzimat era, a Western music orchestra was established within the harem of the court. While the band and the orchestra rehearsed twice a week, the "ince saz" and "kaba saz" bands rehearsed once a week in the harem. In the big guest hall of Dolmabahçe Palace's harem, the Western music orchestra, which was composed of 60 concubines, played violin, cello and contrabass. Moreover, sultans and shahzades occasionally attended these entertainment events.

The book also addresses the issue of polygamy in the Ottoman Empire. Göncü's research reveals that plural marriages were rare in Ottoman society. According to data gathered from 20 registries in 17th century Istanbul, among 1,242 men, 1,147 of them had one wife, 84 of them had two wives, seven of them had three wives while only four of them had four wives. The study on 19th century Bursa's inheritance books showed that 353 men out of 361 married men were in monogamist relationships. These studies further indicate that the concubines outside the palace were not also taken as a wife by the head of the household.
Last Update: Apr 08, 2015 10:15 pm
RELATED TOPICS