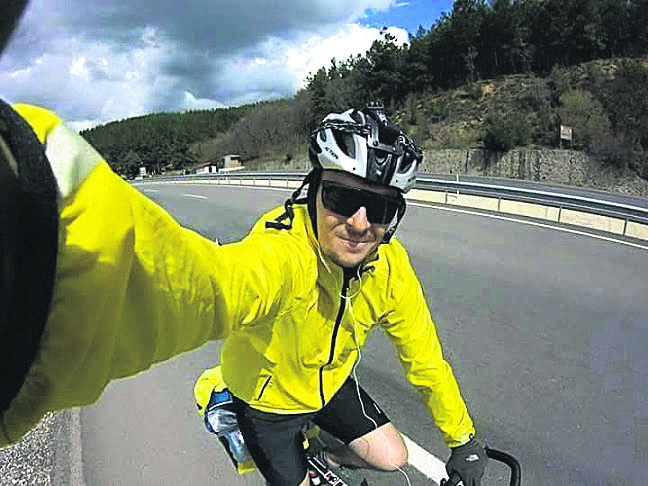 by Zeynep Esra İstanbullu Apr 15, 2015 12:00 am
What can you do with a bicycle? Setting off on a journey from Istanbul to other countries on his bicycle, young idealist sportsman Meriç Şehit, aims to raise awareness of the beauty of nature and finds sponsors to offer scholarships for children. His 540-day tour, which commenced from the Beylikdüzü district of Istanbul on March 29, has been sponsored by various institutions, including the Provincial Sports Directorates of National Education and Beylikdüzü Municipality. Şehit aims to cycle for eight hours every day to complete his 72,000-kilometer tour in 540 days. The cyclist will meet with bicycle lovers and visit municipalities and schools where he will listen to the dreams of students during his tour, which involves 417 districts, 74 provinces and three countries. Moreover, Şehit will document with photographs the culture and traditions of the regions where he sojourns, and determines the schools that needs help and support. The sportsman cycles in the harshest weather conditions from Uzunköprü to Keşan, Gallipoli and Çanakkale and has now arrived in Bursa.

Şehit, who had the courage both physically and psychologically to set off on a 540-day journey on his own, even though all cycling tours are held with teams around the world, is also a mountaineer. The sportsman, whose route includes unique natural beauties such as Mount Ağrı, is monitoring how many kilometers he covers with the help of a computer installed on his bicycle. Şehit's journey will continue for more than one year despite the weather conditions and he has been attracting the media since the start of his journey. Şehit's 540-day journey will end once he reaches the point he started, in Istanbul.
Last Update: Apr 15, 2015 10:35 pm
RELATED TOPICS