Find your inner 'home' at one of Istanbul's hottest yoga spots 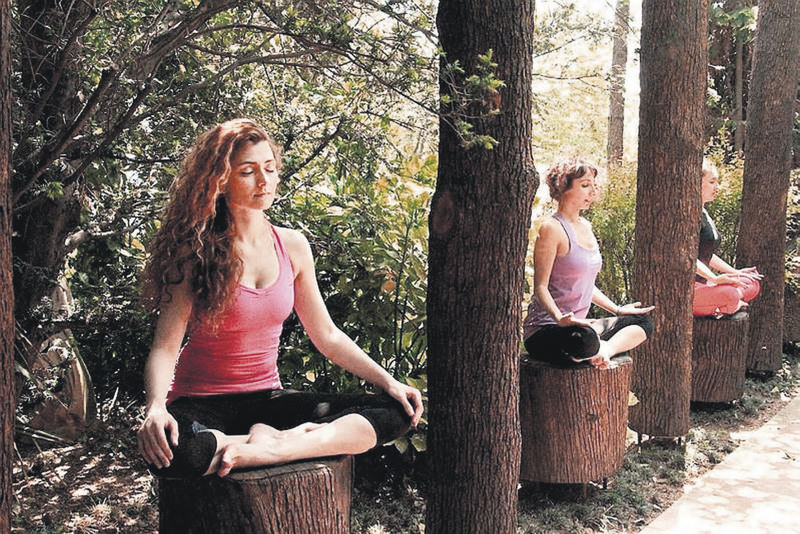 No matter how much we may love Istanbul, it is never easy to get used to the concrete buildings, inevitable traffic and the millions of other inhabitants we share the crowded streets with. Sometimes we all need to get away from it all, take a deep breath, and say 'Namaste'

Yoga is a physical, mental and spiritual practice of a variety of types, the best known being hatha yoga and raja-yoga. The origins of yoga are said to date back to pre-Vedic India, but most likely developed around the sixth and fifth centuries B.C. amongst ancient India's ascetic circles.

Constituting "spiritual discipline" in Hinduism, Buddhism and Jainism, yoga is a practice with the ultimate goal of reaching "moksha" (liberation). Along with its numerous spiritual and mental benefits, there are also physical benefits of yoga. These include: Increased flexibility, muscle strength and tone, improved respiration, energy and vitality, the maintenance of a balanced metabolism, cardio and circulatory health, weight loss, improved athletic performance and protection against injuries.

Many yoga enthusiasts find the effects of shutting out external noise and listening to their inner thoughts therapeutic, giving you the chance to relax and unwind while simultaneously working out. The "asanas" (postures) are just one of the eight branches of yoga; some of the others include concentration, meditation and liberation. Some yoga instructors prefer to focus on yoga as a whole philosophy and way of life, whereas others prefer to say that they just teach yoga as an exercise.

Recreational activities for the mind and soul, such as Pilates and yoga, were impossible to find in Istanbul just 10 years ago; However, with the popularity of these activities growing rapidly, more and more centers have been opening and offering classes and sessions available in multiple languages.

So, pick the yoga perspective that you prefer and feel the most comfortable with, leave your negative energy and worries – along with your shoes – at the door, keep reading to learn where you can try yoga in Istanbul and begin your yoga experience!

Our first stop is one of the best known Yoga centers in Istanbul: Cihangir Yoga. Cihangir Yoga is a community of yoga teachers in Istanbul who teach the most contemporary methods of hatha yoga. Working under their motto "Yoga for Everyone," Cihangir Yoga literally has something to offer everyone. Offering more than 200 classes per week, Cihangir Yoga has various memberships and class packs you can purchase. With its three locations in some of the most prominent neighborhoods in Istanbul – Cihangir, Istinye and Caddebostan – Cihangir Yoga has a variety of classes including: The fundamentals of yoga, yoga therapy, yin yoga, core, power, flow, body/mind/spirit, shadow yoga, Ashtanga yoga Mysore style, mat Pilates, pregnancy yoga and yoga for kids.

There are also many workshops you can attend in the near feature such as "The Art of Self Praxis with Godfrey Devereux" (April 24-30), "Art of Attention with Elena Brower" (May 7-10) and "Dancing in the Forest of Feeling: Shiva Nataraja in Story and Practice" (June 8-10).

If you already do yoga and wish to learn how to teach, there is also teacher training available at Cihangir Yoga. Different courses are available with a variety of opportunities such as 200 and 300 hour trainings.

Now, it is time to visit YogaŞala, meaning the home or abode of yoga in Sanskrit. YogaŞala was opened in 2001 by Seyda and Can Malta as the first yoga studio in Turkey. YogaŞala is meant to create a community where people can practice yoga, breath and be "at home" in their bodies. Sessions at YogaŞala are multi-level and offer eclectic yoga styles, workshops and one-on-one sessions. The current sessions feature vinyasa flow, Ashtanga, kundalini, sivananda, hatha and yin yoga as well as sessions for pre-natal yoga, Pilates and yoga for kids. The certified experts at YogaŞala focus on intelligent sequencing, emphasizing the connection between breath and movement from asana to asana. This practice builds strength and flexibility in the body and steadiness in the mind. Again, similar to Cihangir Yoga, YogaŞala is also offering fantastic workshops in the coming weeks such as "Practicing Dharma Yoga as an Art of Living in Wholeness with Yiannis" (April 18-19),

"Ayurveda: A Life of Balance with Ulli Allmendinger" (April 25-26 and May 16, 30-31) and "Fly Away with Alexis Gulliver" (May 2). YogaŞala has three locations in Istanbul – Nişantaşı, Etiler and Bagdat Caddesi – as well as one in Ankara.

The last stop on our list is 40 Derece Birkam Yoga, located in Etiler. The Birkam Method of hatha yoga is a sequence of 26 postures and two breathing exercises practiced in a heated room. It is specifically designed to work the entire body, using heat to stretch muscles deeply, prevent injury and flush unwanted toxins. This yoga series stimulates the organs, glands and nerves, and systematically moves fresh oxygenated blood throughout the entire body, restoring health to all systems. It is an extremely well balanced practice, and in each 90 minute class, the practitioner gains physical, mental and spiritual health benefits.

The philosophy of 40 Derece Birkam Yoga says that the yoga room is intentionally heated to 40 degrees Celsius with 40 percent humidity. Before changing the construction of the body from the inside out with yoga, like metal, you have to heat it up to soften it – as a warm body is a flexible body. Only then can you reshape the body any way you want.

The reasons for keeping the temperature of the room 40 C is because it keeps the body from overheating, it protects the muscles and allows for deeper stretching. It also detoxifies the body, thins the blood to clear the circulatory system and improves strength by putting muscle tissue in the optimal state for reorganization.

This yoga studio is an interesting and splendid way to start your yoga hobby. Everything you need to attend your first Birkam yoga class is listed on the website, so be prepared to sweat and relax!
Last Update: Apr 15, 2015 10:57 pm
RELATED TOPICS