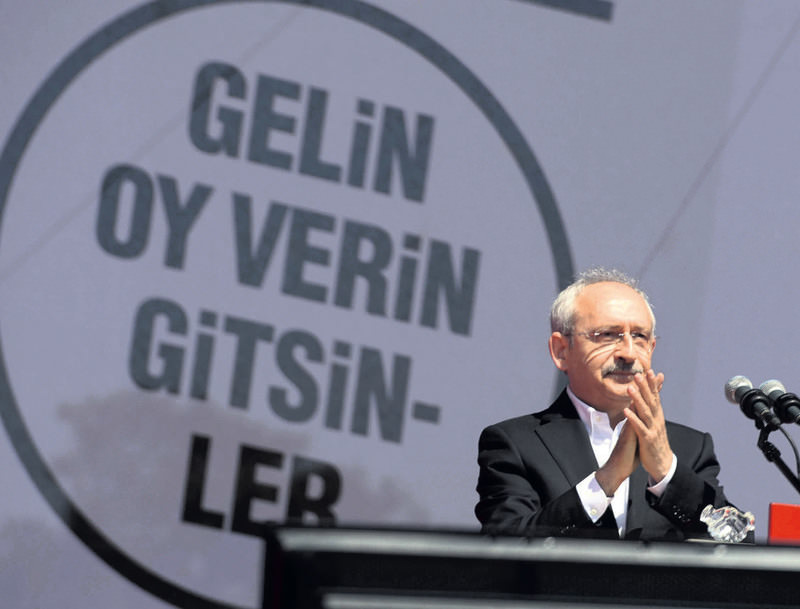 Last week, the CHP launched its new campaign slogan, ‘gitsinler,' which means ‘let's get rid of them.' A graffiti-style pair of hands painted red and clapping was introduced, followed by a short video campaign advertisement

I first heard the new Republican People's Party (CHP) campaign, or should I say anti-campaign, I was overcome by nausea. "We are applauding as a nation. Come and vote, and gitsinler." I have trouble translating this last phrase. Literally it means "let them go." But in everyday speech it contains a dismissal, a deprecatory reflex. "Let's get rid of them" would be closer to the colloquial meaning.

This slogan is disturbing on so many levels; the number of horrific ideas that lurk behind it turns the blood cold. Let's dismantle it here, examining it phrase by phrase.

The first phrase of the campaign is that "we are applauding" as a "nation." But actually, what is being done here, as we can understand from the advertisements and from the slogan, is not applause. Applause is in appreciation of something. What the CHP is referring to here is a protest. Indeed, in the advertisement this is openly stated, just in case we don't get it. This is not clapping to cheer the nation on; it is clapping, which will probably be accompanied by banging of pots and pans, to protest against the current government.

This part of the campaign slogan is terribly disturbing. To base a political party campaign on a negative, on a protest, can only be destructive. It comes as no surprise that the CHP has no policies to offer up. They are not saying let us build the economy in a different way, let us restructure education, health, or other institutions. I have never heard the CHP present concrete policies and they do not have them today. The CHP idea of political debate is to destroy the ideas of the other parties. Rather than coming up with a realistic, functional alternative, they are trying to tear down what others do. In the advertisement, they claim that "they are challenging those who have brought Turkey into an unbearable [unlivable] condition."

The fear that lies in voting for a negative is that if this party, by some odd turn of events, should come to power, they will tear down everything that the Justice and Development Party (AK Party) government has established. The health service, which has been extensively rebuilt, will be razed to the ground; the economy, which has come in leaps and bounds, will be sent in another direction. Education, which has had many reforms introduced to it, will be ripped apart to re-establish the old, non-functioning, unjust system that existed before. At least, that is what comes to mind, due to this lack of constructive policies.

After the statement "we are applauding as a nation," which is the protest part of the campaign, people are encouraged to come and vote. The reason they should vote? So that "gitsinler." This one word, this off-the-cuff, deprecatory remark, encompasses more than just the party or the people; it encompasses anything that party – in this case, the AK Party – has introduced. As stated above, the unspoken idea is that if the AK Party "goes" so too will all the changes that they have made in the past 12 years.

The idea of the protest vote, this focusing on the negative, however, goes beyond implying that reforms will be dismantled – other sinister doors are waiting to be opened. In a protest vote, if the so-called "protestors" do not get what they want, that is, if they do not win the election, they then will feel justified in trying to take their "rights" by force. This little phrase – gitsinler – lays the ground for possible disturbances after the election. The CHP will say that they do not have this in mind, that this is not their intention. But their little slogan tells people "if you – like us – do not approve of the AK Party, come and vote and we will send them away." And if the CHP loses the vote? Well, the idea of sending away has already been planted. There are plenty of methods for sending people away; none of them part of a democratic process.

Lest the reader may think this is a hysterical reaction, please remember that we are talking about Turkey. We are talking about a campaign based on the phrase gitsinler. Just vote for us, and we will get rid of them. People get rid of pests, dandruff, unwanted pounds; sending a political party away, getting rid of a political party, has too many terrifying connotations. Where will you send them? More importantly, how will you send them? Like Menderes? Like the people who protested in the late '70s? In Turkey, getting rid of a political party is nothing new; but many sincerely hope that it is something that has been left in the past.

Actually, it is this phrase of gitsinler that is perhaps the most disturbing part of the campaign slogan. First of all, there is no subject to this phrase. This slogan does not say "Let the AK Party retire to the wings." It says basically, get rid of them. Who is this "them"? Are "they" just the AK Party's leaders? I think not. So, is it all the people who work for the AK Party? I think not. Is it the 8,000,000 AK Party members throughout the country? I think not.

Even if the advertisers' aim was to refer to any of the above three, this is not how it will be perceived. Anyone who wears a headscarf is subject to being called a "Tayyipci" (a derogatory remark that indicates someone is a supporter of the AK Party/Erdoğan). Thus, the natural consequence of such an advertising campaign will be that women with headscarves will be expected to "go." As will their husbands and children. Anyone who prays, anyone who fasts, they will all be expected to go. They will become the subject of gitsinler.

Such expressions should not occur in the 21st century. We have experienced the Holocaust, we have experienced a number of terrible genocides and wars. How can a responsible political party of many years standing come out with such a phrase? Gitsinler, this is the real situation in Turkey. The polarization that exists is drummed up by the opposition; divide and rule. Despite the great progress made in Turkey under AK Party governments, developments in the economy, in infrastructure, in social aspects, in human rights – progress acknowledged by even their strongest critics abroad – this ad campaign states that "they" (the AK Party) have brought Turkey into an unlivable state; how or why it is unlivable state is left undefined.

When phrases of polarization are uttered, the only way to decipher who is doing the polarization is to look at who the "us" is and who the "them" is. It is not the "them" who will be doing the dividing. They are, if you like, the victims. The normal situation in most countries is for the "them" to be the minority and the "us" to be the majority of the population. In Turkey, the "us" is a minority, one that used to rule and wants to rule again. The "them" makes up the majority of the country.

This is a prime example of negative politics. Instead of offering any platform, any policies, rather than defining what needs to be changed, the CHP is trying to win the election on what they perceive to be the faults of the current government. Do they really think that the Turkish people are so naïve as to vote for a party that offers nothing to take the place of any perceived deficiency?

It is clear that this advertisement does not contrast the position of the CHP and the AK Party. It is a direct attack on the opponent and as such is not in keeping with political ethics. It is a negative advertisement and offers no concrete policies. The CHP has no concrete policies to offer; all it has to offer is a future state of threat and chaos. It leaves me asking the question I have asked since coming to Turkey: When will Turkish party politics grow up? It takes two to tango, as they say, and as much as the AK Party puts forward policies and tries not to be pulled into the "polarization" trap, it cannot always remain aloof. The next two months will be tense times in Turkey. The vote is now about "gitsinler."
Last Update: Apr 17, 2015 12:35 am
RELATED TOPICS