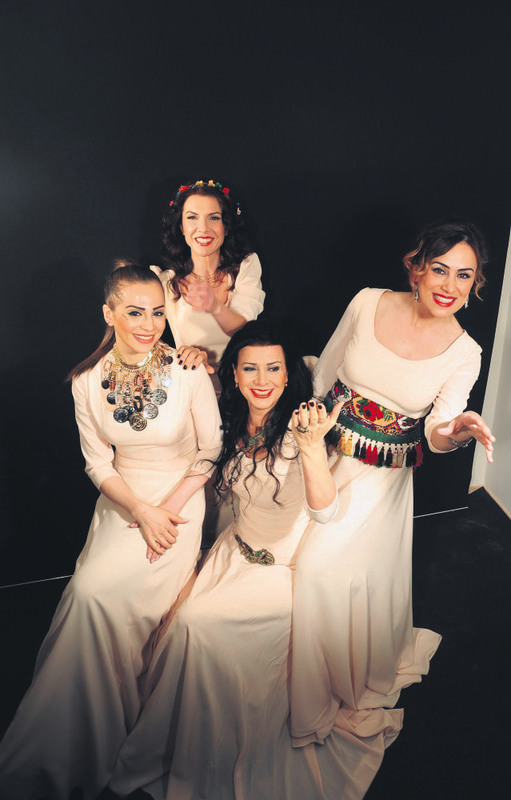 Formed two years ago by four women, the group ‘Yedi Cihan Kadınları' performs in various languages, including Turkish, Assyrian, Arabic and Laz, as well as many others. The group also represents Turkey internationally

Two years ago, four women – Mehtap Demir, Züleyha, Eda Karaytuğ and İmran Salkan - formed the music band "Yedi Cihan Kadınları" (Women of Seven Worlds), whose repertoire features songs from different languages such as central Kurdish (Sorani), Arabic, Azerbaijani Turkish, Syriac, Kirmanjki (also called Zazaki) along with Balkan and Laz languages. The ethnicity of the band members is multi-cultural just like their music, as the group consists of a Turk, an Arab, an Albanian and a Kurd. Covering melodies from Anatolia to Mesopotamia, where the Ottomans enjoyed sovereignty for centuries, these four women have received critical acclaim both in public and from the Presidency of Turkey. They particularly attracted great attention after giving an unforgettable concert,titled "Turkey's Languages, Turkey's Melodies," at the Cemal Reşit Rey Concert Hall under the auspices of the Yunus Emre Institute last December. The band has an exclusive fan base thanks to their different style that reflects Turkey's multi-layered and colorful picture through their music, and they also feature instrument players performing traditional Ottoman rhythms and local folk songs.

Mehtap Demir is an ethnomusicologist who specializes in Turkish folk music. She is also a lecturer at the Istanbul University State Conservatory. Demir has released four solo albums and three compilation albums, and her young singer Züleyha drew great attention with the release of her 2011 album featuring famous singer Zülfi Livaneli's songs in 10 languages including Kurdish. Züleyha's album created a stir, especially when the Kurdish reconciliation process became a visible part of Turkey's agenda. Eda Karaytuğ is a member of the Ministry of Culture and Tourism's Istanbul-based Turkish Music Research and Application Society. She has a solo album called "Gönülden" and another album featuring classical Turkish music composers such as Itri. Born to an immigrant Macedonian family, İmran Salkan performs as a soloist in different orchestras and music projects both in Turkey and abroad. She has participated in international culture and music festivals, and her rich repertoire of Balkan music covers both colorful and sad songs.They represent Turkey at various music festivals and conferences. Mehtap Demir, the Principal Artistic Director of the band, gave an exclusive interview about the details of the project.

When and how did you first decide to come together? And when did you start rehearsals?

All of us engaged in different genres, released albums and gave concerts. We perform both classical and folk Turkish music. I realized that we could describe Turkey's musical amalgam on the same stage. I am also the group's project consultant. State musicians Selçuk Murat Kızılateş and Göksel Baktagir are our music directors. Our 16-member band features virtuoso musicians. I perform the traditional songs of Anatolia, Central Asian music and Azeri songs. I have also created compositions in Persian, Greek and Ladino languages. Eda Karaytuğ colors our band with her Arabic, Syriac and classical Ottoman songs. Züleyha is specialized in Zazaki and Sorani Kurdish songs and can also perform in Armenian, Georgian and Laz languages. She brings to life the surviving melodies of Mesopotamia and Anatolia. Finally, İmran Salkan takes us to the Balkan countries with her songs. We introduced our multi-cultural repertoire two years ago during a March 8 Women's Day concert.

The band reflects the cultural richness of Turkey with examples from different ethnic and religious groups. Could you tell us more about the kind of feedback you receive considering the socio-cultural diversity?

We do not like the word "ethnic," instead we embrace a local and multi-cultural perspective. We are the children of an increasingly global world whose borders have become less visible, and which is open to dialogue with rapid communication opportunities. As a group of women, we demonstrate our stance with our melodies and while singing side by side and holding each other's hands. Turkey has a huge musical heritage in Anatolia and other regions. No words can fully describe this musical makeup. As musicians and singers, we represent the uniting power of music. In addition, as women, we introduce a nuanced touch. Our symbol is a woman active in social life and living beyond the world of politics.

Have you received support from the government? How do they help you?

We will give a concert on May 7 as part of the G-20 Summit and then attend an international fair in Milan, Italy to promote our country. We are happy to see that state institutions understand our message. We are proud to represent Turkey with our multi-cultural vision.
Last Update: Apr 28, 2015 10:46 pm
RELATED TOPICS