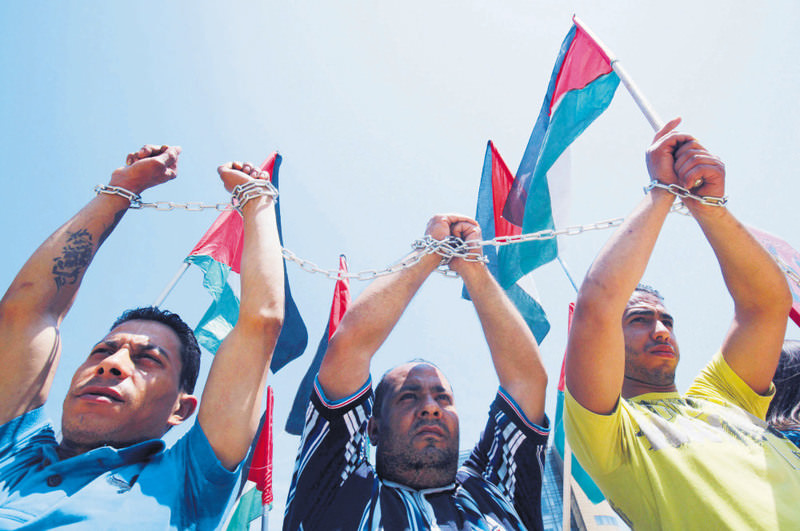 The Palestinians during a protest to mark the anniversary of Nakba
by Anadolu Agency May 11, 2015 12:00 am

Rajab al-Toum is a Palestinian man who can still vividly recall the events of the Nakba, the day that marks the beginning of Palestinians being driven from their homeland, which included the atrocities committed by Jewish gangs against the local Palestinian population

Rajab al-Toum, a Palestinian man who witnessed the Palestinian Nakba ("catastrophe" in Arabic), says the history books fail to accurately describe the days that followed the events, which coincided with the establishment of Israel on May 15, 1948. Al-Toum still vividly recalls events, including the atrocities committed by Jewish terrorist gangs against the local Palestinian population – memories that still bring tears to his eyes. "The massacres that took place at the time remain etched on my memory," al-Toum told Anadolu Agency.

When the Nakba occurred, al-Toum had been working on a farm in Beersheba (in what is now southern Israel) when violent Zionist gangs forced hundreds of thousands Palestinians to flee their homes and villages.

He remembers seeing Jewish soldiers dragging a young pregnant Palestinian woman away before killing her in front of her husband and children. "I trembled in fear when I saw this," al-Toum said. "I was afraid they would kill me too." 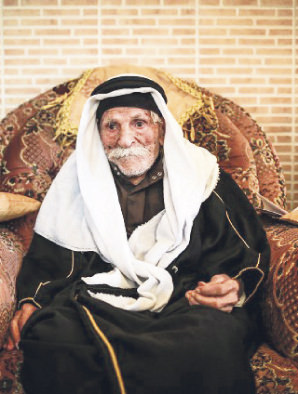 After the soldiers slaughtered the pregnant woman, they withdrew, giving al-Toum – along with other Palestinians who were hiding in fear – some respite.

Later, however, al-Toum would discover – to his horror – that the pregnant woman was not the only Palestinian to be slaughtered by Jewish paramilitary groups. Numerous other men, women and children, he later found out, were killed – often in front of their families – by armed Zionist groups like the Haganah and the notorious Stern Gang.

Many were slaughtered, al-Toum recalled, while others were simply shot and killed.

At the time, he said, most Palestinians failed to grasp the enormity of the catastrophe that was unfolding before them.

They began to understand the scope of the crisis when heavily-armed Jewish gangs stormed their villages on the backs of tanks.

News of the carnage spread like wildfire, said al-Toum, prompting Palestinian men, women and children to flee for their lives – most of them leaving all their property behind. "Jewish gangs shelled Palestinian villages indiscriminately with the aim of terrorizing residents into fleeing," the old man said.

Hundreds of Palestinians, he added, were buried under the rubble of their destroyed homes.

"The history books fail to adequately describe the horror of the massacres that took place," al-Toum, who lives in the city of Beit Lahia in the Gaza Strip, said. "They don't do justice to the painful experiences of the Palestinian families who lost their homes," he asserted. He said he would never forget the scenes of Palestinian families fleeing their ancestral homes in terror. "It was the most terrible thing I've ever seen in my life," al-Toum said.

He went on to decry the role played by Great Britain – responsible for Palestine at the time under a League of Nations "mandate" – in allowing Jewish gangs to attack and destroy Palestinian villages.

Al-Toum also denounced Britain's infamous 1917 "Balfour Declaration," which had called for "the establishment in Palestine of a national home for the Jewish people."

Jewish immigration to Palestine rose considerably during the British mandate period, which lasted from 1922 to May 14, 1948.

Ultimately, some 700,000 Palestinians fled their homes – or were forcibly expelled by invading Jewish forces – while hundreds of Palestinian villages and cities were razed to the ground by the conquerors.

The Palestinian diaspora has since become one of the largest in the world.

Until this day, Palestinian refugees remain scattered across Jordan, Lebanon, Syria and other countries, while many have settled in refugee camps in the Palestinian West Bank and Gaza Strip. "Britain armed and protected the Jewish gangs," al-Toum asserted, adding that many Palestinians who fled their homes had believed – mistakenly, as it turned out – that they would soon return.

Many of these Palestinians kept the keys of their homes; some snuck back to their fields at night to tend to their crops. "Only gradually did they realize they would never return to their ancestral homes and farms," the super-centenarian lamented.

What is Nakba Day?

Nakba (catastrophe in Arabic) is the day that is annually commemorated by Palestinians to mark the displacement that preceded and followed the Israeli Declaration of Independence in 1948. Thousands of Palestinians mark the the Nakba evey year, when scores of Palestinians were driven from their land to make way for the nascent Israeli state. A 1947 U.N. General Assembly resolution called for the creation of independent Arab and Jewish states in what was then British-mandated Palestine. Around 800,000 Palestinians were subsequently displaced and 500 Arab villages destroyed in attacks by armed Jewish groups at the time. According to the U.N. Palestinian refugees agency (UNRWA), there are currently more than 5 million registered Palestinian refugees inside the occupied Palestinian territories, Jordan, Syria and Lebanon.
Last Update: May 11, 2015 10:29 pm
RELATED TOPICS