The Ottoman Empire: A shelter for all kinds of refugees 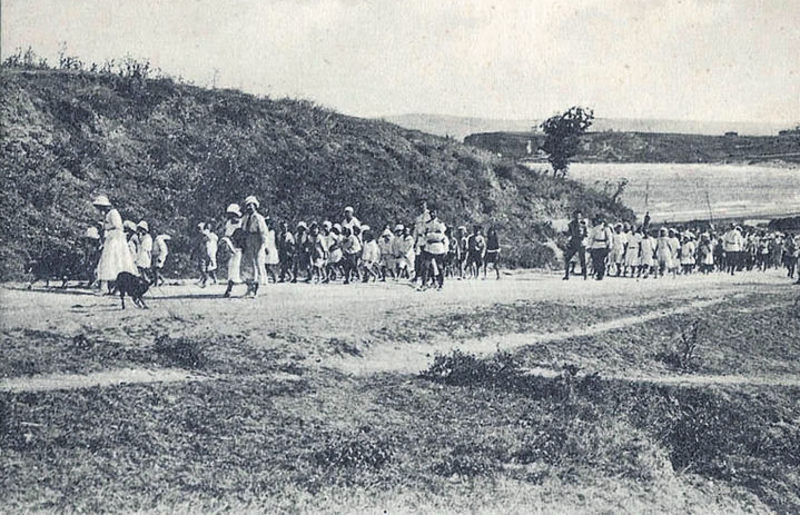 Families of the tsarist White Army found asylum in the Ottoman Empire in Gallipoli.
by Ekrem Buğra Ekinci May 16, 2015 12:00 am

Throughout its history, not only Muslims but also non-Muslim people and groups who were exposed to discrimination because of their religion, ethnicity or lifestyle resorted to taking shelter in the Ottoman Empire. In turn, they were openly welcomed by Ottoman society

Today, people are competing with each other to become a U.S. citizen. Once upon a time, being an Ottoman subject was likewise prestigious. For those who were oppressed due to their beliefs, race, and traditions, being an Ottoman was a lifesaver.

The criteria of being a subject in an empire does not show similarity to those in nation-states where race or ethnicity is often dominant and others are seen as minorities. Regardless of its ethnicity and religion, the populace is considered the children of the emperor. Similar to a father who does not differentiate among his children, the subjects of an empire are equal before the law. Some might be more equal than others, but this does not break the common norm.

The Ottoman state was not a nation-state, it was an empire It was always more advanced than its contemporary states in terms of perception of subjects and minority rights. Ottoman subjects came from different religious backgrounds, but they were equal before law. At that time, this right was not granted to those outside the dominant group anywhere around the world.Whether they were Muslim or not, all people who recognized the sovereignty of the Ottoman Empire were its subjects. In return, the state was expected to protect the people. When Muslims living in other countries wanted to immigrate to the Ottoman Empire, which they used to see as the "dar al-Islam" ("Abode of Islam", where the Muslims enjoy peace and security within the country under Islamic rule), the empire felt itself responsible to allow the immigrants to become subjects. No matter in which country they were living, the Ottoman Empire treated the world's Muslims as its subjects.

After the Russian invasion of Crimea in 1784 and the Caucasus in 1864, Muslims living in these regions immigrated to Anatolia either by ship or land routes Thousands of them died on the way. The Muslims who were able to make it to the empire, which they thought of as their homeland, were settled in available villages and towns. When Ottoman rule receded in the Central Europe and the Balkans toward the end of the 17th century, Muslims flocked to Anatolia and found asylum there. This major immigration and wave of refugees continued until shortly before the fall of the Iron Curtain.

Throughout history, not only Muslims, but also non-Muslim people and groups exposed to discrimination because of their religion,race or lifestyle resorted to taking shelter in the Ottoman Empire. They were kindly welcomed by the Ottoman society that used to have a rather different culture. They also found the chance to continue their lives as they wished without fear. The Ottoman government granted non-Muslim refugees to become subjects without expecting anything in return. This was because Oghuz traditions (Oghuz Khan, legendary Turkish Emperor who is accepted as the ancestor of the Ottoman Dynasty in the pre-Islamic term), one of the foundations of Ottoman culture, ordered to host guests and not to hand them over to their enemy whoever they might be. There were many landlords who would even take arms to guard around their house all night to protect their guests. . The Ottoman Empire had even gone as far as taking the risk of war for this cause. Similar principles exist in Islamic culture as well.

In the beginning of 15th century, Qara Yousuf, the sultan of the Kara Koyunlu State that ruled what is now Iraq northwestern Iran, eastern Turkey, Azerbaijan and Armenia, and Sultan of Iraq and southern Azerbaijan Ahmad Jalayir, both fled Timur (Tamerlane) and took shelter with Ottoman Sultan Bayezid I. Timur wrote a letter to take them back. Bayezid rejected the request, which means he took the risk of fighting against the world's biggest army. Living for his honor, Bayezid was defeated and lost his throne and a certain part of his country.

Tens of thousands of Jews living in Spain where persecuted by invading Christians after it was under Muslim rule for eight centuries and were forced to choose either converting to Christianity or death. From 1492, almost all of them took shelter in the Ottoman Empire. Ottoman ships shuttled between Spain and the Ottoman coasts to carry them. The refugees settled in wealthy port cities like Constantinople, Smyrna and Thessaloniki. Even further, Constantinople was mentioned as the city with the highest number of Jews in the world for years. Books on Jewish history clearly state that the Ottoman Empire was the land where Jews under pressure were accepted as refugees the most and where they lived comfortably.

When Elkas Mirza, who rebelled against his brother Tahmasp I, the Persian shah, was defeated, he also found asylum with his escort under Sultan Süleyman the Magnificent in 1547. Although he criticized the sultan for his policy on the Persian Empire, he was hosted at the Ottoman palace with high-level protocol. Some Ottoman statesmen objected to the sultan's attitude toward the prince, but Süleyman said: "We do what the reputation and dignity of the empire requires." During his reign, there were many refugees taking shelter in the Ottoman Empire due to sectarian differences and their living was provided by the empire.

Upon the emergence of the Unitarian Church in Italy, which denies the Trinity, Unitarians resorted to escaping to the Eastern Europe due to pressure from other Christians. Prince Sigismond Bathory of Transylvania, a subject of the Ottoman Empire, denied the Trinity as well. This is because Christians against the Trinity found asylum there to continue their lives. Likewise, the Sicilian priest, Sozzini, who wrote a book denying the Trinity, escaped to Cluj-Napoca – known as Kolozsvar in Hungarian – in 1577.

King Charles XII of Sweden took shelter in the Ottoman Empire after he was defeated by Russians in Poltava. From 1709 to 1714, he lived in the city of Bender within the Ottoman Empire's European borders. A Russian ambassador's notice on the king's immediate hand over to Russia was not accepted. Moreover, the Ottoman government went to war against Russian Tsar Peter the Great for this reason. The king did not return to his country even after the Ottomans won the war. The expenses of the king and his 600-member entourage were covered by the Ottoman government. The king was also offered help when he went back to his country long after the peace was maintained.

In the 18th century, Russians fiercely rejected Peter the Great's prohibition on beards. This was because beards were a symbol of being a pious member of the Orthodox Church. However, the crazy tsar showed no mercy to anyone and did not hesitate to kill even his son. After all, those who did not want to shave their beards had to leave Russia. For this reason, Cossacks found asylum in the Ottoman Empire and were settled in Balıkesir's district of Manyas. Molokans, who differ from Orthodox Russians with some beliefs like crossing with three fingers and drinking milk on certain fast days, took shelter in the Ottoman Empire's border city of Kars. Upon the invitation of the Russian Empire, most of the Cossacks and Molokans returned to Russia recently. Although Russia offered money and land to each Christian who migrated from Anatolia in the 19th century, people migrated to Russia looked rather insignificant compared to those having migrated from Russia to Anatolia.Hungarian and Polish patriots who were defeated in their war of independence after the Revolutions of 1848, fled from the Austrian and Russian Empires and settled in the Ottoman land. Even though these refugees put the Ottoman government – The Sublime Porte – in a very critical political position, the state did not tend to take these refugees back at all costs. This attitude was highly appreciated by Britain and France, which are fond the notion of independence. Even further, some young Londoners released the horses of an Ottoman ambassador's carriage and tried to pull the carriage by themselves to show their enthusiasm. Some of the refugees converted to Islam and began to serve the Ottoman government. Among them were many famous statesmen and soldiers who took roles in the Ottoman modernization process. Polonezköy, a small village near Istanbul, took its name from Polish refugees taking shelter in the Ottoman Empire.

Following the 1917 Russian Revolution, a civil war broke out between the supporters of the tsar and communists. When the tsarist White Army lost the war, anti-communist Russians found asylum in the Ottoman Empire, which was suffering from great difficulties due to World War I. Between 1917 and 1921, almost 200,000 refugees were carried by ships. Settled in Istanbul and Gallipoli, these refugees lived with the support of the Ottoman government, civilian people, and the Allied Forces, which were occupying Istanbul at the time. They were first settled in refugee camps established in empty lands and squares and then to available houses and buildings. They worked in small jobs and most of them migrated to Europe and South America afterward. Some of them permanently settled in Turkey. A few years later, Leon Trotsky, a founder of the Soviet Union, was dismissed by Stalin and took shelter in Turkey in 1929 and lived in Istanbul for a while.
RELATED TOPICS