Despite lifestyle restrictions, Iranians find easy way around the authorities 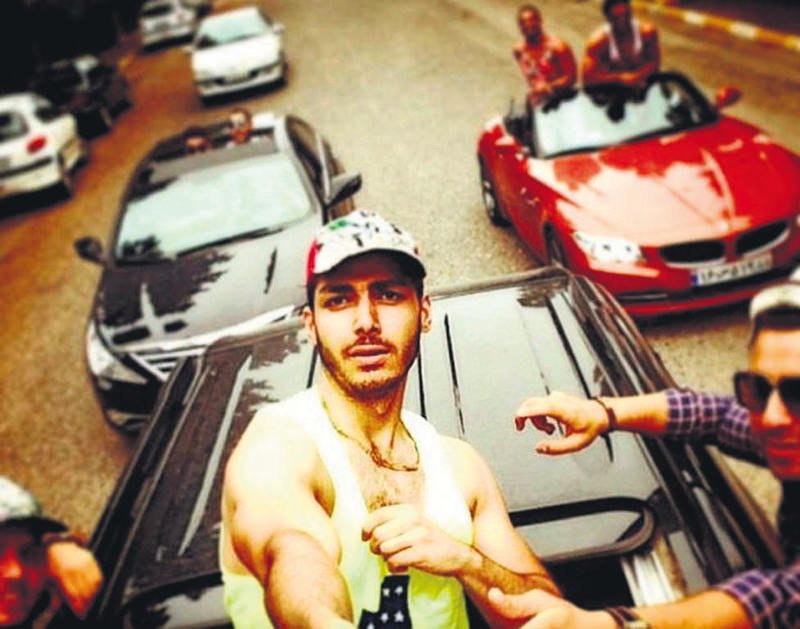 The social media platform ,Rich Kids of Tehran, has drawn reaction from the public.
by Daily Sabah with DPA May 17, 2015 12:00 am

Many things people in the West regard as fun are banned in Iran, from tweeting to trendy hairstyles. The problem for authorities, however, is that Iranians, especially the youth, always find various ways to circumvent many of the implemented bans and restrictions

The head of the Iranian Hairdressers' Association merely wanted to announce new prices, but was drawn into a recap of state regulations on Western hairstyles by bored reporters.

Of course, decadent cuts were absolutely prohibited, Mostafa Gowahi replied dutifully. For example, barbers who resorted to the "satanic" style of shaving the sides of the head and spiking up the hair on top would get their licenses revoked, he said.

But the official line – the hairline, you might say – is not always popular. "It's all froth and no substance," was the disdainful response of Hamid, owner of a barber shop in northern Tehran. The client says what he wants, pays good money and that's what he gets, he added. "I cannot impose a grandfather look on a teenager, even if it means I end up leaving him looking like a dog's dinner," he said. As a dad as well as a hairdresser, Hamid knows only too well that barbers and customers have been happily ignoring the hairstyle rules for years.

For more than three decades, the Islamic system ushered in by the revolution has feared a "Western cultural invasion" that would propel Iranian society into immorality. Young people especially are expected to get a solid Muslim upbringing and not to lose their national and religious identity to Western influences. But, apart from a few hardline clerics, few people now subscribe to this longstanding view, and regard it as paranoia. "You cannot lock up the young people because of this," said Iranian President Hassan Rouhani. "You can't "drag anyone into paradise by force." Moreover, people can no longer be controlled in the age of the Internet and satellites. So, you just have to trust them, according to Rouhani.

The ban on social networks like Facebook and Twitter underscores his point. Millions of Iranians visit these sites, and most of the national leadership members have Twitter and Facebook accounts, including the president and even the country's supreme religious leader. But on paper at least, it is still prohibited. "It doesn't get any dumber than that," said one Internet cafe operator in Tehran. Iranians circumvent the ban with software that can be found at any computer store.

Seen as equally absurd is the enduring ban on the satellite dishes that are clustered on roofs across the country. Police have repeatedly forcibly removed dishes over the years but achieved very little by doing so.

"They have taken mine down three times already and the very same day I had someone come over and install a new one with a better dish," said Sudabeh, a 48-year-old housewife.

Strict regulations for unmarried couples have also done little to keep young people from going on dates, often meeting in the capital's not-so-cheap coffee shops to drink endless cappuccino and flirt the hours away. "The idea of the powers that be that only married couples sit here for hours and chat over expensive coffee shows, again, that stupidity has no limits," said Reza, who runs a thriving coffee shop in the capital.

Hollywood movies are also banned in Iran, but its bazaars are overflowing with pirate copies. "We get the big movies here even before they reach Europe," said a DVD vendor in Tehran's Tajrish Bazaar. With prices below $0.50, some Iranians will buy a stack of 10 DVDs at a time for the weekend. The same applies to banned pop music CDs, which are easier to get and cost even less.

As for the strict dress code for women – they are supposed to wear veils to cover their hair and long coats to obscure body contours when in the company of male strangers – "we simply come up with a new sexy look every time they bring in a new ban," said student Mina. In recent years, coats have got shorter and narrower, revealing enough blow-dried hair and makeup to – apparently – cause a stir among the guys.

Just how counterproductive the bans can be for politicians became apparent in the 1997 presidential elections. At the time, conservative candidate Ali Akbar Nategh-Nuri was considered a favorite against Mohammad Khatami. Both clerics were politically aligned and had little to offer that would distinguish them from their rival. Then Nategh-Nuri spoke out in favor of the satellite dish ban during a television interview. Khatami, who had kept quiet on the subject, scored a landslide victory.

In recent years, some Iranian deputies and the public are also reacting against the increase in the number of luxury cars and their possibly hazardous effect on traffic. For example, the social media platform "Rich Kids of Tehran," a platform showcasing luxury living with photos of high-priced cars and people's flamboyant lifestyle, that has thousands of followers on social media platforms like Instagram, Tumblr, Facebook and Twitter is one of those that has drawn great reaction from the public.

A total of 850 luxury cars were impounded in Tehran due to traffic violations last week, said Teymur Hüseyni, the head of Iran's Traffic Police Unit. "The fined drivers pose a risk for other drivers and pedestrians as they drive dangerously and fast," he continued. Moreover, traffic cops have started to monitor luxury cars with dangerous drivers for 24 hours. "The regular monitoring allows us to target dangerous drivers and others creating distress and curtail the negative atmosphere on highways," Hüseyni said.
Last Update: May 17, 2015 10:49 pm
RELATED TOPICS