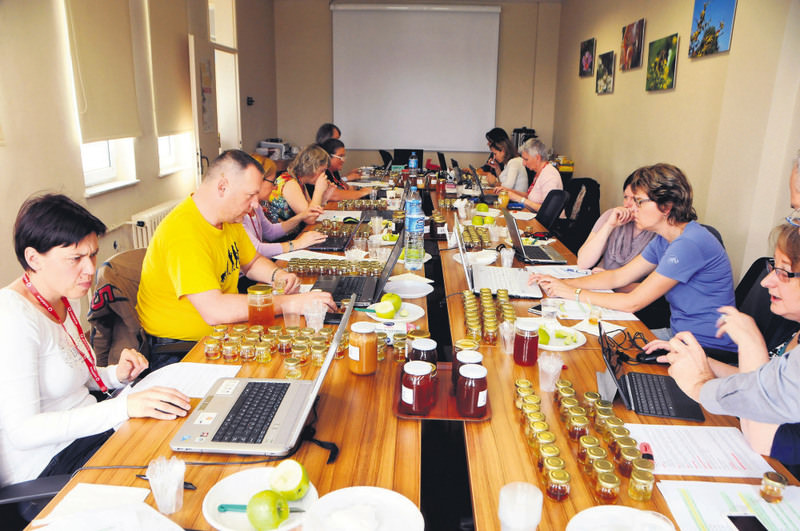 Last week, sensory analysis group members from the International Honey Commission (IHC) tasted honey brought from Turkey's 23 different regions as part of an international congress. The experts stressed the high-quality of Turkish honey due to the country's rich flora and wide-ranging varieties

Last week, sensory analysis group members of the International Honey Commission (IHC) tasted honey brought from Turkey's 23 different regions in order to choose the best one. As part of the event "From Hive to Table 2015: International Congress on Safety and Authenticity of Bee Products," IHC members tasted honey from 28 producers from various places like Kayseri's Develi and Elazığ's Karakoçan districts and Edirne's Karakasım and Hakkari's Kaymaklı villages. There was also a honey producer from Italy's Piedmont region.

During the international honey contest, honey samples first underwent chemical tests in laboratories to see whether they contained foreign substances. After this, the samples were given numbers and introduced to the IHC jury committee. Twenty-nine honey samples were analyzed across the three categories of flower honey, forest (honeydew) honey and chestnut honey.

Gathering at the Bee Platform of Istanbul Technical University (İTÜ) Food Engineering Department, the jury committee examined honey samples for their color, taste, smell and structure. While tasting each sample, the experts ate sour apples and drank water to avoid mixing flavors. Lucia Piana, a leading expert in sensory analysis, said she was surprised to see that honey produced in Turkey is perfect in terms of sensory properties. Piana said it is common to get a fermented or smoky flavor from honey due to production defects, but she did not encounter unknown substances or foreign flavors while tasting Turkish honey.

"This success shows the attention of Turkish honey producers on quality and production. There are various kinds of honey in Turkey. You do not see such diversity in other countries, which means that Turkey is rich in flora," Piana said. She said while tasting forest honey, she found a licorice flavor. "There are rare kinds of licorice-flavored honey. I was surprised to find it in Turkey," she said. Professor Dilek Boyacıoğlu of the İTÜ Food Engineering Department said that the congress welcomed experts specializing in bee products from various countries. Boyacıoğlu went on to say that new technologies and practices in the apiary industry were discussed at the event. She said the sensory analysis group compared the honey samples based on scientific methods. "The experts did not mix different flavors, because after tasting each sample, they took a break and cleansed their palates by eating sour apple and drinking water," she said. A statistical analysis is expected to be conducted to announce Turkey's best honey. "It is an entirely scientific study," she said, adding that a certificate will be given to the producer who comes in first in the competition. Boyacıoğlu further said new studies on avoiding counterfeiting in the honey industry were discussed.

The congress was organized in collaboration with the İTÜ Food Engineering Department, the Istanbul Development Agency (İSTKA), Yıldız Technical University Food Engineering Department and Aristotle University of Thessaloniki Agriculture Faculty in Istanbul. Food safety problems and counterfeiting were thoroughly discussed during the congress with a particular focus on honey and other bee products. The IHC sensory analysis group members included the following people:

With natural sugar, honey has antibacterial properties, provides natural protection against winter illnesses and is used as a remedy for coughing and throat infections. The most important feature of honey is that it kills bacteria, viruses, fungi and other parasites in the body. Thanks to the high number of osmoles in honey, it causes the body to lower the pH level and produce hydrogen peroxide, which acts as an antibacterial agent. Honey pollen is also rich in catalase enzyme, which eliminates disease-causing bacteria in natural ways, such as with gluconic acid produced by the phosphate and chloride in honey that acts as a powerful antioxidant when it is consumed. Moreover, when honey is heated, such as when it is added to hot beverages, cakes or cookies instead of sugar, the components of this natural wonder do not spoil.

Turkey already has the world's second-biggest honey producer, which produces approximately 90,000 tons of honey annually, according to the 2012 report by the Food and Agriculture Organization (FAO) and 56,000 professional beekeepers have 5.9 million beehives across the country.

With an annual production of 436,000 tons of honey, China is the world's largest honey producer. The other big producers after China and Turkey, are respectively, Argentina, Ukraine, the U.S., Russia, India, Mexico, Iran and Ethiopia.
RELATED TOPICS