The conquest of Constantinople: The heralding in a new era 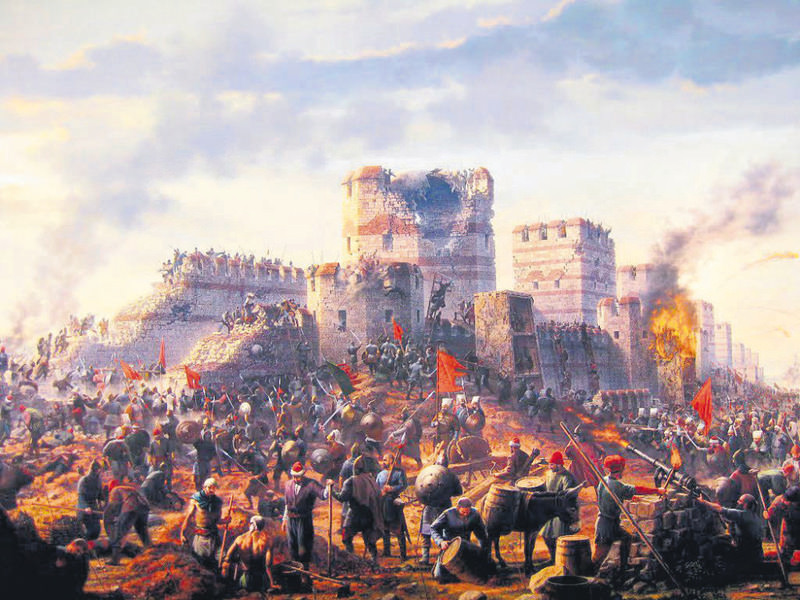 The conquest of Constantinople by the Turks on May 29, 1453 is more than just the ordinary fall of a city. The conquest was a turning point both in the Turkish and Islamic history and the history of the world

There were two powerful states in the world during the rise of Islam: the Persian Empire ruling Iran and Iraq, and the Eastern Roman (Byzantine) Empire reigning in Asia Minor, Syria, Egypt and the Balkans. The Persian Empire was already abolished by Muslims at the time of Umar bin Khattab, the second caliph of Islam. The empire's territories were also conquered. Syria and Egypt were the first two Byzantine regions conquered by Muslims.

Referred as "Costantiniyya" by Arabs, Constantinople, the capital of the Eastern Roman Empire, became an ideal of Muslims. The Prophet Muhammad's well-known hadiths (prophetic tradition) symbolize this ideal: "Verily you shall conquer Constantinople. What a wonderful leader will he be, and what a wonderful army will that army be!" and "The first army that goes on expedition to Constantinople will be forgiven."

Muslims exerted great effort to conquer Constantinople since the time of Caliph Muawiyah. The first Muslim army to conquer the city was sent in 670 under the commandership of Yazid I, the next caliph after Muawiyah. Some companions of the Prophet Muhammad, who were still alive at the time, also participated in the army. One of them was Khalid ibn Zayd, who is today known as "Eyüp Sultan" among Turks and has a tomb in a famous Istanbul district named after him. Aged over 80, Khalid ibn Zayd took part in the siege to obtain the good news preached by the prophet. The siege failed. The Islamic army was infected with epidemic dysentery and the siege was lifted. Khalid ibn Zayd passed away and was buried at the bottom of the city walls.

Afterwards, Umayyad Caliph Abd al-Malik sent his sons Suleiman and Maslama to lay siege to the city once again in 715. Maslama surrounded the city over Anatolia on land while his brother Suleiman arrived over the Aegean Sea. The city was not entirely conquered. However, Maslama took over one of Istanbul's large neighborhoods, Galata, and stayed there for seven years.

Standing still, the Arab Mosque in Galata is a memory of those days. Centuries later, Ottoman Turks revived this ideal. The 4th Ottoman Sultan, Yıldırım Bayezid, and his grandchild Sultan Murad II laid siege to the city many times. However, due to other enemy attacks, the siege was lifted in every attempt.

Istanbul not only situates in a strategically important location, but also has a very beautiful landscape. As Emperor of France Napoleon said, "If the earth were a single state, Istanbul would be its capital." It is still the same today. The conquest of Constantinople was vouchsafed to the 7th Ottoman Sultan, Mehmed II. The 21-year old and genius emperor prepared siege plans day and night. He invented a rapid cooling cannon, the largest by far at the time and ordered to build a fortress on the European side of the Bosporus in a short period of time. He gathered intelligence around the city. In those days, the Orthodox residing in Constantinople were afraid of the Catholic pressure against them. There were those who saw Ottomans as a savior because the empire granted religious freedom to Christians everywhere it conquered. Prime minister, Grand Duke Loukas Notaras once said, "I would rather see a Turkish turban in the midst of the city [Constantinople] than the Latin mitre."

When Sultan Mehmed II's fleet was unable to enter the city due to the defensive chain stretching across the mouth of the Golden Horn, he ordered several ships to roll overland into the sea and attacked the city's heart. Cannons fired at the city walls for days. After a 53-day siege, Byzantine soldiers finally surrendered.

The body of the last Byzantine emperor, Constantine XI Palaiologos, who died in battle holding his sword in one hand, was found on the city walls. Showing his respect to the emperor, Sultan Mehmed II gave permission to bury the courageous enemy.

The conquest of Constantinople paved the way for Muslims. The Ottomans were now on the safe side because in every military attempt, they came up with the Byzantine alliance with Europeans. Muslim armies reached as far as Vienna. Islam was introduced in Europe and many Balkan communities became Muslim.

Sultan Mehmed II, who bears the name of Prophet Muhammed, gained an exceptional recognition in the whole Islamic world as he succeeded to conquer Istanbul, where many others attempted before, as a young emperor. Even today, there is no one among Muslims who does not know or recall him with gratitude.

The conquest set the stage for the title of caliph assumed by Sultan Mehmed II's grandson Selim I. The entire Muslim world accepted the leadership of Ottoman sultans, who obtained Prophet Muhammad's good news by conquering Constantinople, without hesitation. As the Prophet Muhammad mentioned the city's name (Constantiniyya) in his words, the Ottomans retained the name.

They proudly used it to show that they conquered the most beautiful and important city in the world, founded by a big emperor like Constantine I. Coins and books were issued with this name.

The conquest of Constantinople is also a turning point in world history. Latin people (Italian, Spanish, Catalan and French) regarded the siege as an issue of dignity and came to defend the important city of the Christian history regardless of sectarian differences. They heroically defended the city, yet were defeated.

Mehmed the Conqueror behaved these chevaliers in a knightly way. In return for their heroism, he did not take them prisoner and allowed them to return their home. A belief supporting that the threat of Turks cannot be eliminated in Europe emerged. Following this, Europeans started to look for other places in farther west, paving the way for new discoveries. The treasure of the New World flowed into Europe. This also led the emergence of Renaissance.

The ideal of the conquest of Constantinople made easier for Turks to root in Anatolia and the Balkans. They restored their confidence and said, "We conquered Constantinople; we cannot easily be removed from this region anymore." Their confidence opened the path for new conquests. Istanbul was the key to the conquest of both Egypt and Hungary. At the time of the World War I, the leaders of the Committee of Union and Progress were thinking of evacuating Istanbul and moving Sultan Mehmed Reşad to Konya.

When they asked the former Sultan Abdulhamid II, who was imprisoned at the Beylerbeyi Palace, he said, "If we leave Istanbul, we cannot come back. Can't we just behave like the last Byzantine emperor who died in battle while fighting with his sword?" For this reason, Sultan Vahideddin did not leave Istanbul even at the cost of losing his throne.

It was not an easy task for the Ottoman Empire, who was wretched by the army of Timur in 1402, the ruler of the Timurid Empire, to recover in 50 years and then conquer Istanbul. The conquest turned the Ottoman state into an empire. An empire means a big state different to which vassal states are connected.

The Ottoman state was a beylik with ordinary traditions; however the conquest moved the state to imperial status. Europeans recognized Mehmed the Conqueror, who had many crowns like Crimea, Wallachia, Bosnia and Albania, as the Roman Emperor. Italians considered him hero who could unite their divided country. The Duke of Florence ordered to issue Sultan Mehmed II's portrait on medallions featuring three crowns - the Ottoman, Byzantine and Roman.

The Ottoman emperor appointed the Patriarch of the Greek Orthodox Church in Istanbul, which was in vacancy at that time.

As the protector of the Orthodox, he gained strength against Catholics. Sultan Mehmed II also stimulated the disunity between the Catholics and the Orthodox Christians. When Muslims conquer a city, as a religious duty, they have to perform prayer together on the first Friday. In line with the law of war, the city's biggest church Haghia Sophia was converted into a mosque, but other churches remained. The Ottomans did not capture local people and offered them to become citizens. Even further, they did not seize local people's property. Sultan Mehmed II wanted the city to improve while increasing its vitality. The Ottomans developed the city, which was destroyed during the 13th century Latin invasion and unable to recover then. Skilled population from the Balkans and Anatolia were settled there. The Turks affixed their seal to the city.
Last Update: Jun 01, 2015 5:45 pm
RELATED TOPICS