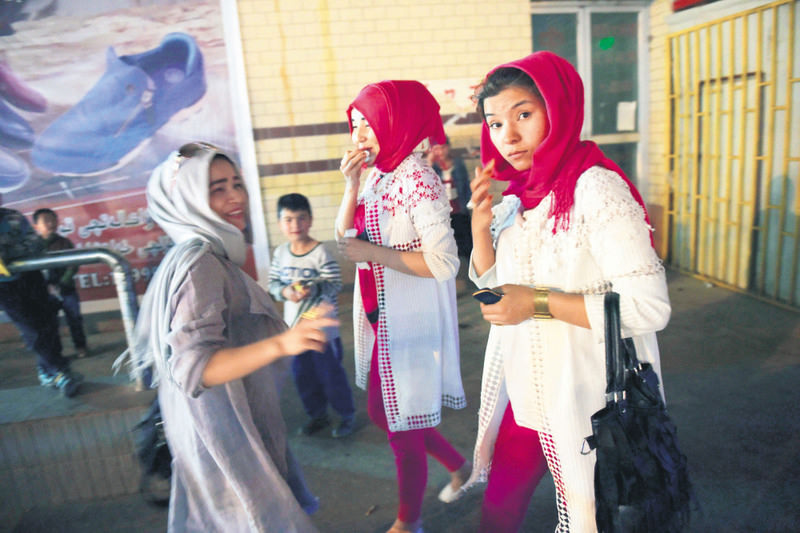 Despite the Chinese government's encouragement on inter-ethnic marriages in the country, cultural differences and prejudice limits marriages between China's ethnic majority Han population and certain Muslim minorities, in particular the Uighurs of Xinyang

It was not until late on her wedding day that Aygul told her parents she was even in a relationship. And they were furious. A year later, her Uighur father was still so angry she had chosen a Han husband that he beat her up in a Beijing train station, stamping on her throat as he hurled insults. "They hounded me and demanded I choose: My mother and father or my husband," said the 26-year-old website editor. "They told me I had to leave him."

Against a backdrop of prejudice and violence, inter-ethnic marriages between Uighurs, a mostly Muslim minority who speak a Turkic language, and China's ethnic majority Han are extremely rare. Uighurs in their home region of Xinjiang have long chafed under Beijing's yoke and say they face restrictions on religion, language and culture, with some yearning for independence.

Official media have labored to showcase Han-Uighur marriages – with couples singing the praises of the government and Communist Party – as a symbol of "ethnic unity." The phrase is common on propaganda posters throughout Xinjiang, but such messages have to contend with centuries of division. "Since I was 12, my mother always told me: 'Concentrate on your studies and don't find a Han boyfriend,'" Aygul said. "But I was educated in a Chinese-language school and most of my classmates and friends were Han."

Her husband Xiaohe, a 30-year-old translator, had already given up pork, prohibited by Islam, and tried to make a good impression on her parents with a three-page handwritten letter in Uighur but without success.

Ming, a Han man married to Ahman, a Uighur woman from the oil town of Karamay, received a similar reaction the first time he spoke to her parents. "Her father told me: 'If you are going to marry my daughter, then I'll disown her,'" he said. His wife – who was attacked by a group of Uighur classmates as a teenager for having a previous Han boyfriend – added: "My parents see my marriage to a Han as a loss of face."

Both sides often cite cultural or religious differences for the divide, but Newcastle University professor Joanne Smith Finley, a Uighur culture expert, said the true but unspoken issue is politics. "The number one reason for the taboo on inter-ethnic courtship and intermarriage is inter-ethnic conflict," she said, adding that Uighur women married to Han men face the harshest ostracism due to the patriarchal nature of Islamic societies. "A Han Chinese man taking a Uighur woman as his wife is seen as symbolic invasion," she explained. "Just as China is taking the oil, natural gas, gold and jade, and has reduced the people to a marginalized, impoverished and disenfranchised section of society in Xinjiang, when a Chinese man takes a Uighur wife, Uighurs view that as the physical embodiment of what China the state is doing to the Uighur homeland."

Uighurs had the lowest intermarriage rate of China's 56 officially recognized ethnic groups at 1 percent, according to Xinjiang Academy of Social Sciences researcher Li Xiaoxia, who analyzed census data from 2000. That fell to 0.6 percent for Uighur-Han unions.

"There is a huge difference between the Uighurs and the Han in terms of culture and language," she said, adding that more recent data showed little change. "People are prone to look for relationships with someone with the same ethnicity."

Yet the Hui, who like Uighurs are Muslim, have an intermarriage rate about 13 times higher – although they share a language and many more live in China's heartland cities.

The reaction of Ming's parents was typical of how many Han view Uighurs, informed by stereotypes and casual racism.

"My parents thought all Uighurs were pickpockets or scam artists selling so-called ethnic food for inflated prices," said the 28-year-old, a manager at a state-owned company.

Xiaohe's parents, from the northern province of Hebei, were more positive. "At first my parents thought it was strange, but then they found out she graduated from Peking University" – an elite school often called the Harvard of China – he said. "They said: 'Your grades were never that good and your wife is so smart, this is great.'"

The couples who spoke to AFP requested anonymity due to the sensitivity of the issue. Ahman, Ming, Aygul and Xiaohe are members of a mixed couples' chat group where they swap stories, tips and support. Their unions have only survived because they live in Beijing, they say. It would be impossible for us to be married and live in Xinjiang," Xiaohe said. "The social pressures are just too intense."

Some believe authorities in the region – home to around 10 million Uighurs – should act to encourage inter-ethnic marriages.

But an almost year-long program in rural Qiemo County that offered couples as much as 50,000 yuan ($8,000) – a fortune where average income is less than $3 a day – had no effect, according to an official.

In neighboring Hotan, many said cultural differences are insurmountable. "I would never let my son marry a Han, the only way would be if she converted to Islam," said Uighur restaurateur Mehmet Omar. "Even then, I'd be worried she wouldn't respect our traditions and wouldn't take good care of my grandchildren. She would have to be a very good Muslim before I could accept her."

Han Taxi driver Xing Yongzhen said pork's central place in Chinese cuisine would be a major issue. "I would only marry a Han," he said. "If I had a Uighur wife, we'd never be able to eat together. Our lifestyles are completely different, there's nothing in common."
Last Update: Jun 02, 2015 10:35 pm
RELATED TOPICS