Legends about Taqi al-Din and the demolished Ottoman observatory 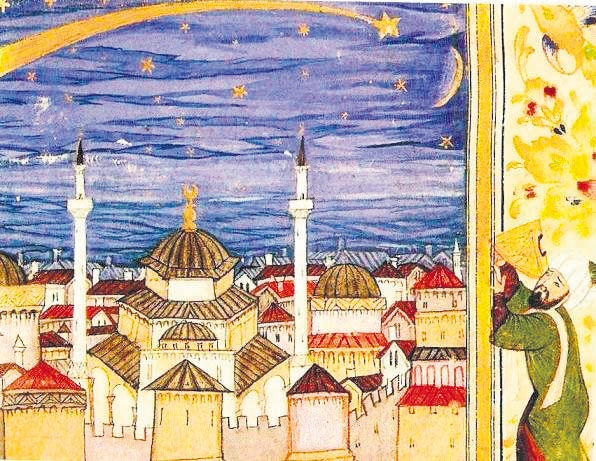 It is rumored that the very first Ottoman observatory was founded in the 17th century and demolished soon after. Several stories have been attributed to the observatory and its founder, Taqi al-Din, throughout history, but the truth is hidden between the lines of these legends and stories

There are two legends given as examples every time Turkey's backwardness is discussed. The first one is the late arrival of printing and the second is the destruction of an observatory.

Purportedly, a man called Taqi al-Din founded the first observatory in our history in Istanbul in 1571. However, the religious men, who dominated the society and the state, destructed the observatory as they were against knowledge and science. Oh such bigoted people!

Firstly, it must be said that Taqi al-Din's observatory was not the first observatory in the Ottoman Empire. Since old times, observatories or similar institutions like "muvakkithane," a place where prayer times were calculated using astronomical methods, existed in Islamic madrasahs and large mosques. This is because time is a requirement for all – obligatory – religious practices in Islam. It is necessary to know the time to make one's religious practices valid. In the Islamic world, therefore, astronomers ("munajjim" in Ottoman Turkish) were always trained. The observatory of Taqi al-Din was independent from a madrasah and was established with a special purpose.

The second issue is that Taqi al-Din was already a religion scholar himself. His real name was Muhammad ibn Ma'ruf and he came from Damascus. He was known as Takiyüddin al-Rasıd (Taqi al-Din the Observer). His father was a qadi (Islamic judge). He studied at a madrasah and became a qadi in Egypt. In 1570, Taqi al-Din came to Istanbul with his family, where he met with the famous religion scholars of the period. He was then assigned as "munajjimbashi" (the head of astronomers). Taqi al-Din took the attention of Sheikh al-Islam Hoca Sadeddin Efendi, the teacher of the Ottoman emperor. With his encouragement, he founded an observatory to solve some problems in astronomy. Ottoman Sultan Murad III provided the observatory's finances. He spared no expense and did not avoid any burden. Some of the materials for the observatory were brought in from Egypt. The sultan accepted and whatever Taqi al-Din requested. All of these details can be followed in the accounts of the Ottoman archives.

Finally, the observatory was opened under the name "Dar al-Rasid al-Jadid" on the hillsides of Tophane in 1577. Until that time, Taqi al-Din conducted observations at the Galata Tower, and also founded a library composed of astronomy books at the observatory. Taqi al-Din developed the instruments that were found at observatories at that time and also invented some new ones. His staff consisted of 16 people; including eight observers, four clerks and four servants. During those years, they had a chance to observe a comet passing by the earth.Certain modern historians, who are unaware of these details, assume and say that the observatory was established for astrological purposes; however that was not the case. Ala al-din Mansur's Persian poetic manuscript "Shahinshahnama" (Book of King of Kings) sheds light on this case. His work mentions the meeting between the sultan and Taqi al-Din. The sultan was asking him about observations and Taqi al-Din said, "There were doubtful points in Ulugh Beg's "Zij" (astronomical chart). With the help of observers, the chart has been now corrected." What Taqi al-Din said, means that the purpose of establishing the observatory was to correct the astronomical charts prepared by famous Turkmen astronomer Ulugh Beg, who lived in the 15th century.

So, why was the observatory shut down? Supposedly, Qadizade Ahmad Shams al-Din Efendi, who was the Sheikh al-Islam at that time, wrote a letter to the sultan. He notified him about gossip saying that the observatory is ominous and that a plague epidemic broke out due to the observatory. It was also being said that disasters occur in every region where observations are carried out. In 1580, the sultan closed the observatory. Further, Chief Admiral Kılıç Ali Pasha destructed the building through bombardment. These accounts were said by Atâî, who was known for his biographical books on Ottoman scholars. However, Atâî's birthday was later than this case and therefore he could not know this. Moreover, he even gave wrong dates for the observatory's opening and closing in his book. Qadizade was a qualified scholar in both rational and religious sciences and had worked on geometry and astronomy. It is ridiculous to even think that such a scholar could write a letter like that. Therefore, it is not right to depend on Atâî's words, in this case.

Some hints about the incident are available in Shahinshahnama. Taqi al-Din asked the sultan, "The enemy [those who were jealous of them] is dying of grief. You may order to stop the observations, which will be a lesson to those who are low-minded and jealous people." In other words, the observatory achieved its purpose and there was no need to increase the tension. It can be understood that Taqi al-Din was a unique person. He was able to get along well with important statesmen, but could not create a proper relationship with lower officials. He presumably confronted them with envy and hostility. Historian Ali of Gallipoli also described Taqi al-Din as someone who was difficult to get along with in his "Kunh al-Ahbar" (Essence of Histories). When other negative occurrences like the plague epidemic were added, Taqi-al Din understood the situation, closed the observatory and stepped aside. However, he continued his studies. Taqi al-Din passed away in 1585, at the age of 60 and was buried in Istanbul's Yahya Efendi Mausoleum.

Summary: 1- Taqi al-Din was already a scholar himself. Hoca Sadeddin Efendi, who encouraged and protected Taqi al-Din, was the head of the religious men. The Ottoman sultan was the one who commissioned to establish the observatory and spared no expense. So, to whom, how and why did religion scholars oppose? 2- The observatory founded by Taqi al-Din was not the first observatory, but was the first one that was independent from a madrasah and mosque. 3-The observatory was established with a particular purpose. When it reached its objective, it was closed as it completed its mission. 4-Was the observatory founded for astrological purposes? No. It was about developing and correcting the works of famous Turkmen astronomer Ulugh Beg. 5-Did some social incidents, jealous people, and mischief-makers have a role in the closing of the observatory? Probably, but religious men, never! 6-Was this the end of observation and astronomy studies in the Ottoman Empire? No. These activities were at the top of essential sciences in a high Muslim society like the Ottomans. It is not right to lay down the governments' obligation on pursuing real politics to religion or religion scholars.

Taqi al-Din's contributions to astronomy are known worldwide. At that time, only Tcyho Brahe's observatory in Denmark had perfect instruments like Taqi al-Din had. However, Taqi al-Din had a higher number of instruments and his clock was more punctual than the one Brahe had, which meant their observations were more precise. His book "al-Turuq al-Saniyya" on automatic machines was a first in its field. Taqi al-Din wrote one book in the field of medicine-zoology, three books on physics-mechanics, five on mathematics and 20 on astronomy, most of which have not yet been explored. His work about the specific gravity of materials and Archimedes's hydrostatic principles is attention grabbing.
Last Update: Jun 12, 2015 4:33 pm
RELATED TOPICS