Multilingual bookstore in Istanbul builds a bridge between Syrians and Istanbulites 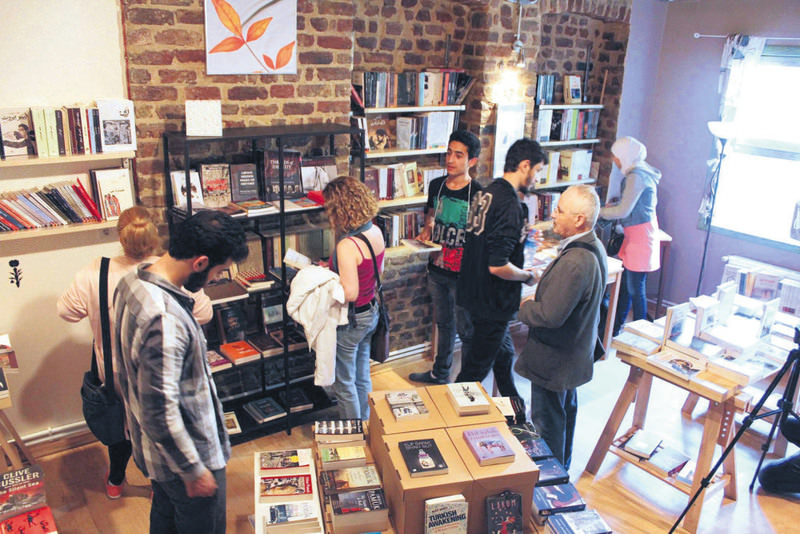 Syrians Samer el-Kadri and Gulnar Hajo, in partnership with Turkish writer and publisher Zeynep Sevde Paksoy and other Syrian partners, have established Pages (Safahat), an uncommon bookstore and cafe with an array of Arabic and multilingual titles and workshops for writers and authors in Istanbul

Since the beginning of the crisis in Syria in 2011, Turkey has come to host more than 1 million Syrian refugees. Moreover, the crises in Iraq have pushed the numbers of Arabic-speaking refugees up even higher around the country. Yet, in Istanbul, the cultural capital of Turkey where an estimated 350,000 Syrian refugees currently reside, literature catering to the Arab population isn't as prevalent as it should be.

This is why Syrian couple Samer el-Kadri and Gulnar Hajo and their Turkish founding partner Zeynep Sevde Paksoy opened Pages, or Safahat in Arabic and Turkish, a bookstore in Istanbul with an emphasis on Arabic titles, where 60 percent of their book inventory is in Arabic and the remaining 40 percent of their multilingual works are in Turkish, English and French. To them, it's the first of its kind.

Kadri and the founders have a long history of working with books. Back in his native Damascus, Kadri, along with his wife Hajo, established Bright Fingers, a publishing house for children's literature. Paksoy similarly works as a writer and publisher of Turkish children's books at Taze Kitap.

Kadri travels to book fairs around the Middle East, ordering Arabic and French books from Egypt, Gulf countries, Jordan, Iraq and Lebanon to his publishing house in Beirut. Paksoy collects Turkish books for the store from publisher friends around Istanbul, and orders English and American titles from London book fairs.

They believe that having a bookstore that does more than just offer literature is important to the well-being of new Istanbul residents and Istanbulites, which has since been missing from the city's art and culture sphere.

"Istanbul is like the highway of the world now," Kadri said. "But [Istanbul] doesn't have a culture house like this."

Kadri left Syria's conflict behind two-and-a-half years ago, first to Jordan and then Istanbul. Unable to withstand the conflict, Kadri and Hajo left their homeland but wanted to preserve Arabic literature in the region. Kadri believes Arab refugees like him can have a means of communication with their new country through literature, especially during trying times of conflict and crisis.

Paksoy believes the bookstore is going to operate as an avenue of Turkish acceptance of Arab refugees in the city.

"Arabs and Turks need such a cultural center. The Syrian people need their books, their literature [and] their own culture [in Istanbul]. The Turkish people need to learn their culture: What they read, what they talk about [and] how they think," Paksoy said. She added, "In today's situation we [Turks and Arabs] are separate and we hold so many prejudices. We think we are different, but when we look at the details, we are so similar. [Pages] is like a networking place for all of us to support each other."

In this spirit, Kadri wanted to emphasize that the books are not Pages' main purpose.

"We will also have workshops, invite Turkish, Syrian and Arab authors, screen films and hold exhibitions and galleries," Kadri said. "It's not just to sell books. This is only one of the things we offer."

Walking up to Pages, one will inevitably walk on uneven cobblestone streets and past short buildings, mostly under construction. Known as the historic Fatih district in Istanbul, the neighborhood is being rebuilt as it becomes home to Syrians and Arab refugees, a newly forming Arab enclave in the Turkish city. In an otherwise wholly residential and tourist area, the bookstore is also located right next to the historic Kariye (Chora) Museum, a 1,000-year-old church-turned-mosque-turned-museum that attracts tourists and Turkish sellers to the area.

When asked why they chose this area for Pages, Paksoy said they wanted to target the new Arabs in the neighborhood. "We want this bookstore to feel like home for anyone who walks in," she explained. "You can communicate with people when you feel like you're at home. You can understand each other in that kind of environment."

To ensure this home-like ambiance is felt, Kadri designed every floor of the four-story building himself. After entering the green building, a wooden staircase takes customers and community members up four floors of small rooms with big windows. According to Kadri, Pages can host 30-35 people at a time.

The first floor consists of a library and cafe where readers can read and community members can come to sit and talk over coffee, tea, juice and snacks.

The second floor is where books with Arabic, Turkish, English and French titles can be found, huddled together on short wooden bookshelves and surrounded by short tables full of books. There is a mini garden cafe on the second floor's balcony where three small, white tables situated on a grass floor seats customers.

The third floor is a children's section, where the tables are meant to seat children and pastel colors dominate the rugs, curtains and shelves.

The fourth floor is an exhibitions, workshops, screening and discussion space.

"[Everything is close to each other] because big tables that separate people don't allow for the kind of communication we're looking for," explained Kadri.

The name Pages was chosen by Kadri.

"It's all about books, but it also contributes to the home theme of the store. It's poetic in that it includes both Arabic and Turkish languages in one word."
Last Update: Jul 01, 2015 1:21 pm
RELATED TOPICS