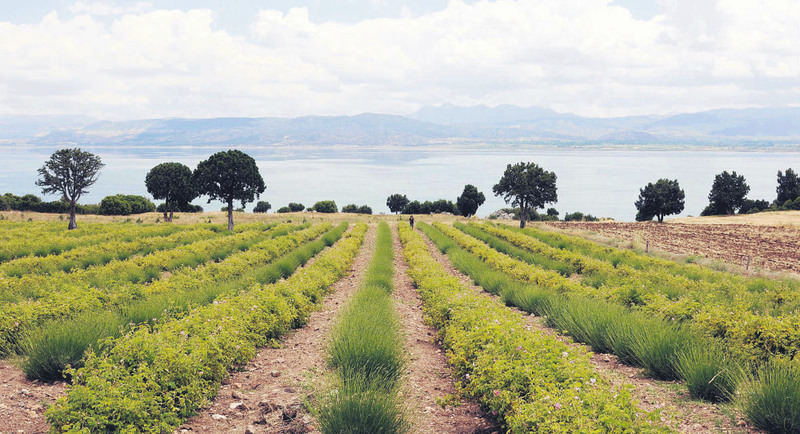 Living in the southwestern province of Burdur, Öztürk Sarıca conducts his environmental fight in an unusual way. He rented a 670-hectare field sitting on a chromium reserve and turned the area into an organic village before miners could exploit its resources

Öztürk Sarıca, founder of the Lisinia Nature Life Space (Lisinia Doğa) in Burdur, produces lavender, rose, thyme and sage on a 670-hectare field in Akçaköy village, which is known as the hometown of renowned Turkish author Fakir Baykurt. Sarıca rented the field, which is a chromium reserve, and began to produce plants that consume less water and have a high value.

To avoid drought on the Burdur Lake and to protect the water resources around the region, Sarıca turned the area into an organic village. Starting by planting rose and lavender, he now harvests other plants. Producing rosewater without distilling its oil, he uses his medical and aromatic plants to counter the natural hazards of mines. He said mines destroy underground water, they release thousands of tons waste into the environment and trees and wildlife are under threat due to the chemicals. For the last five years, the Organic Village has been visited by over 100,000 local visitors alongside more than 5,000 foreign volunteers supporting it. Sarıca said a significant portion of the field is covered with lavender plants."What I first remember about my childhood is that they once said me 'You are a communist, you were born a communist,' " he said.

It was because his hometown – Akçaköy village - is where Fakir Baykurt was born, Sarıca continued. "All people born here are similar. My family was engaging in agriculture and I grew up in fields and was surrounded by nature. I learned about Buda, Marx, Rumi and Confucius at an early age. What I learned has now turned into a project. After a while I clearly understood that money does not matter and human life and nature are very important," he said. Sarıca said he started the project 10 years ago. "Lisinia means 'glitter of moonlight, sunset and sunrise.' I saw this scene here and decided the village would be the set of my project. He named his nature protection project as "Lavanta Deresi" (Lavender Stream). "My project is based on production without damaging nature. People now do not want to produce something without profit," he said. 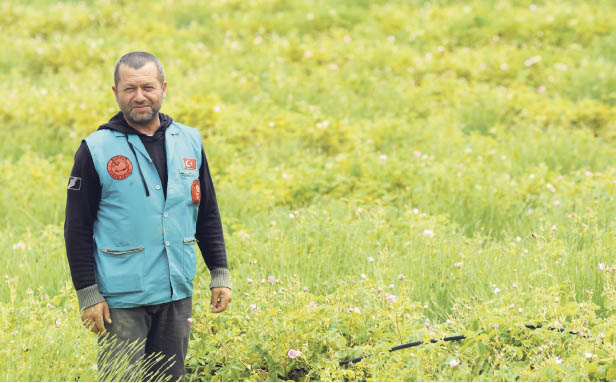 There are chromium mines around Akçaköy. Sarıca acted quickly, before the miners, and rented the two hills. "We then immediately realized our project. The Taurus region harbors many aromatic, medicinal and curative plants. Turkey is rich in curative plants, but we use these fields for different purposes. Indeed, the production of curative plants can make more profit. I try to show that people can also engage in such areas and earn a living. I mean you can earn money without destroying nature," he said. Villagers around Akçaköy also help Sarıca, who believes that it is not enough to be against problems, you have to offer alternatives. "Otherwise, people will obviously go to work in mines and will not resist. We should offer alternative solutions. Next year, we are planning to produce more," he added.Sarıca also underlined the problems on clean water rights and Turkey's water resources. He said when the Ministry of Forestry and Water Affairs introduced a ban on the entrance of mountain goats to forests, it was the first step that made things worse. "With this ban, Turkey began to suffer from a lack of meat. Then, Holstein cattle were imported. People bought Holstein cattle, which gives milk but are not full up. They were brought with lower costs, but as they consume too much, more forage plants like corn and clover were produced. However, these plants consume significant amounts of water," he said. Sarıca said cattle can consume up to 670 tons of water each year if we include the amount of water consumed by these plants.

He said there is a water shortage in Turkey and if the current situation continues, the country will suffer from severe water deprivation. He said these cattle must be raised in Germany, Denmark or in the Netherlands. "Turkey's main milk and meat source comes from goats. The number of goats has been reduced, although Turkey has a long yuruk culture. We call on people not to do cattle farming, but produce plants that consume less water," he said. Sarıca said roses consume 75 percent less water than corn or clover. Lavender, sage and thyme can be grown just with rain water. "There are many other aromatic plants around Turkey. I hope our project will be an exemplary one," he said.

Sarıca, who is also a vet, opened the Lisinia Nature Life Space 11 years ago for the rehabilitation of wild animals in Turkey. The center is the biggest establishment of its kind in Turkey.
Last Update: Jul 01, 2015 10:35 pm
RELATED TOPICS