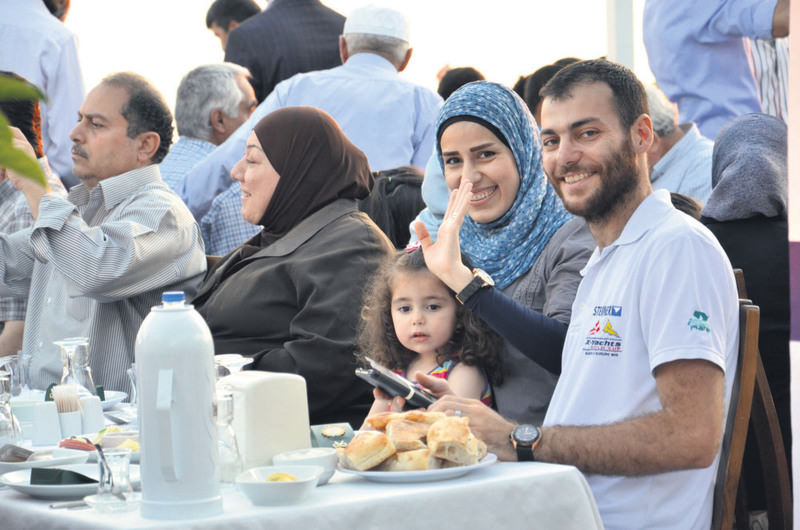 There are many ways to get the complete Ramadan experience. You can partake in an iftar, or you can spend time developing empathy for the situations that others experience. However you decide to spend Ramadan, eating lavish or simple food, what stays with you is the atmosphere, the friends and the camaraderie

Halfway through the month of Ramadan, many iftars have already been hosted. Some have been lavish with rows of forks and knives, indicating the extensive courses to come. Others have been set up on plastic tables in parking lots or on the street with simpler fare eaten with plastic forks and spoons. The cutlery as well as the menu is not really important, however. It is the atmosphere that makes an iftar, an iftar is memorable if there is a feeling of sharing and being together.

One of the street iftars I attended this summer sticks out in my mind. The attendees were local politicians and local residents sitting side by side. Some Roma families were sitting close to me. It was odd seeing them out of their normal setting, that is, sorting through discarded items for what is recyclable or selling flowers on the street.

During this iftar, one little girl, about three or four years old, got separated from her family. Sniffing back tears, she waited stoically for her family to come. Wanting to announce over the PA system that she was lost, we tried in vain to learn her mother's name. Suddenly, I felt someone tug at my hand, and looking down, I saw a young Roma girl who was about seven years old looking up at me. Expecting to see her hand stretched out asking for a financial contribution, I found instead that she was looking searchingly into my eyes. "Is the little girl lost?" I replied that yes, she was lost. "Oh, that's sad. It must be frightening for her. Mothers are important. I hope her mother comes back for her soon." I agreed with her. "I am going to pray to Allah that her mother comes soon." I told her that was a great idea. At that moment I saw a worried woman pushing through the crowd, making a beeline for us. "I think her mother is coming now" I said. "Allah is very powerful, isn't He?" my new friend asked. "Yes, He is." Smiling, my young friend ran after her family, just to be sure that she too didn't get lost."

Another iftar that left an indelible impression on me was one we helped put on at a Syrian school in Fatih. The day before the iftar, we went shopping for the ingredients we needed with some friends. Purchasing the spices from an aktar, we struck up a conversation with the young Syrian boys working there. They grew more and more excited as they learned what we were doing. The conversation became lively and full of laughter. "How much cinnamon do you need? Are you sure that's enough?" they asked. "Don't take this rice, that rice is much better," they said. But the wistfulness in their eyes was obvious to all. They had had to leave school to work; they had to support their families. One later confided to my Syrian friend that his dream was to go to university.

With a sad feeling that we were unable to include our new friends in the meal, we headed to the school, which is in a run-down district. To call the building that houses the school dilapidated would be doing it a great honor. The management of the school spends every spare penny it has trying to fix it up, but every time they make improvements, the landlord increases the rent. This is not a situation unique to this school; many Syrian residents in Istanbul are familiar with this situation.

The idea behind this iftar was that the participants of IstBigBroBigSis would share their iftar meals with the families living at the school, as these families have nowhere else to live, and some of the students who attend the school as well. Most of the volunteers are international students at Şehir University who are devoting their summer to helping Syrian children.

On the day of the iftar, we arrived early to find the kitchen and garden a hive of activity. Four women were busy using the ingredients we had purchased the day before to cook spicy, fragrant rice and chicken in the kitchen. Suddenly, a group of young Egyptian students arrived – the first delegation of IstBigBroBigSis. They came into the garden cheering and calling out greetings in Arabic. It was like an electric shock had gone through the garden. The children had been expecting some older brothers and sisters to arrive, but hearing a language they recognized thrilled them. Then came the Turks and the students from Kosovo and Syria. Cupcakes were brought out for the young people to decorate together. Some children wrote their names in elegant Arabic script, others drowned the cupcakes in colored sprinkles. Everyone worked together, laughing and sharing. Then the Egyptian students started a game, a bit like blind man's bluff, but the blindfold was held up by a person in the center of a ring. There were complicated rules, which, as they were in Arabic, I was unable to follow. Essentially, the children had to grab the blindfold at a certain line from the big brothers and sisters. The Syrian children were laughing, squealing and running. Indeed, it was enough for us to watch and enjoy their pleasure.

Another group started a game of Uno, a suitable game for people from different countries without a shared language as colors and numbers are easy to recognize. The volunteers formed groups with the children and the children decided on the cards to be played. The discussions and competition was so intense that no one realized that the sun was about to set. Finally, just as the dishes were being placed on the table, one group shouted "Uno!" and the game finished as the call to prayer rung from the minarets. The chicken and rice disappeared quickly, which was then followed by cupcakes and other sweets.

The meager kitchen in the rundown school had provided us with a great meal. In addition to the young university students, teacher trainers and volunteers from the U.S., the U.K., Iraq and Turkey joined in. There were also journalists from Syria and Spain spending their day off with the kids.

The table I was sitting at included one group that was speaking in Spanish, one in Turkish, another group in Arabic and another in English. The Syrian university student sitting next to me laughed and said "This is Istanbul." She was right; this is Istanbul.

The common feature about iftars is that everyone is on the same level. At another iftar last week where there were rows of forks and knives, I sat next to people from the U.S. and the Netherlands. The conversation was amusing and lively. Although my dinner companions were not fasting, they were respectful of those who were. Once again, the atmosphere of the iftar was captured through the mutual respect for others. No one ate or drank until the call to prayer was heard, even though they could. Although it had been a long day for them, they waited for those of us who could not break the fast yet.

The last iftar I am going to tell you about followed an extraordinary exhibition. I will diverge from the subject of food and meals to give you a glimpse of the world this exhibition presents. The exhibition was "Karanlıkta Diyalog" (Dialog in the Dark). Many readers may have attended this exhibition, which has been running since the beginning of June. If you have not gone, I strongly recommend that you catch it before it ends on July 31, as experience is well worth it. It is located in the Gayrettepe Metro Station and costs TL 28 ($10.41) per person.

When I entered the exhibition, I had to leave my phone, watch and basically anything that glows behind. The guide gave everyone a white stick, explaining how to use it. Then I proceeded into the darkness, which seems pitch black and longed for a brighter darkness. Keeping my hand on a wall, I progressed down what I assumed was a passageway – as it could have been an airplane hangar since there is no way to judge how large the space is; I was only aware of the wall to my left. I closed my eyes and opened them, but it makes no difference, the darkness is relentless. I could hear the people in front of me and behind me, but could not see any shadows or movement. The guide told me to walk toward his voice. This seemed like a small enough task until I realized it meant I had to let go of the wall, the only thing that was providing orientation. Like diving into icy water, I took a deep breath and set out to his voice.

he guide told me I was going to cross a street. "Wait a minute, there is a step down," I thought. I struggled down, turning sideways, not sure if there will be another step, and proud that I managed this step. Then I suddenly found another step up. "Oh, of course," I thought. "I'm crossing a street and these are the curbs." But we often never think of curbs as steps that have to be traversed. I could hear the sounds of surprise from the people behind me – I was not the only one who had not thought the process through. I then headed toward a crowded place; I could hear people selling their wares. The wall on the left suddenly became a counter, full of fruit and vegetables. I could identify a lemon, an apple and a pepper, most likely a red pepper. Indeed, I was almost able to see their colors. After the market, I came to a ferry. Once I boarded the ship, I could feel it rocking slightly. I sat on a bench and listened to the seagulls, feeling the breeze on my face.

After the exhibition, we went for an iftar at Cafe Down. The wait staff in this restaurant is composed of young adults with Down syndrome, or who are mentally challenged or autistic. The fare was simple but delicious and made on the premises. However, there was a unique spice to the meal – the young people serving us.

These iftars and the exhibition all fit in well with the month of Ramadan. Ramadan is a month in which you are encouraged to think about others who have to face difficulties you do not have to encounter, day after day. To bring Ramadan to life is to experience the real meaning of the month and dine with the local residents of a neighborhood on the street. Take food to Syrian refugees, and invite them to dine with you. Dine with people from different countries and different cultures. Dine with the physically and mentally impaired. All such meals will not only be delicious, but will reveal to you the different aspects of iftar; they will tell you what Ramadan is really all about.

So, this Ramadan, enjoy the food; it is great. But remember to find inspiring company to help you eat the food and share the message of this holy month.
Last Update: Jul 05, 2015 3:12 pm
RELATED TOPICS