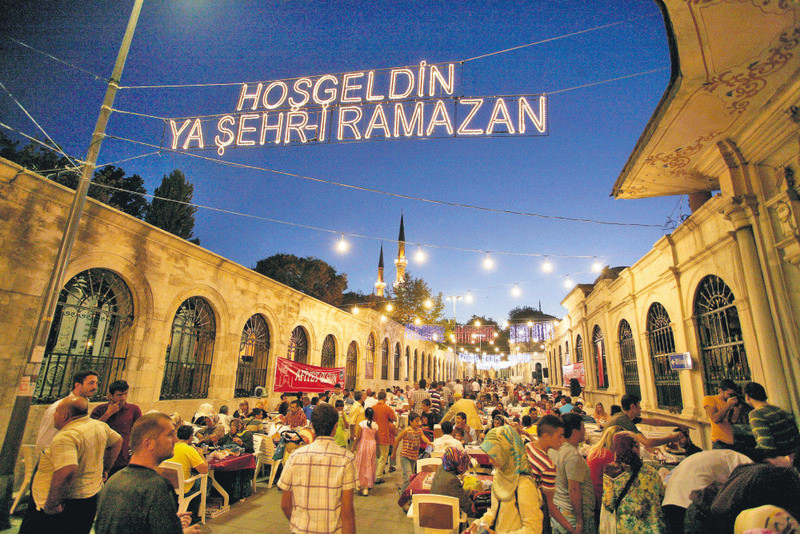 Municipalities all across the country organize large-scale iftar dinners for their neighborhoods.
by Anadolu Agency Jul 06, 2015 12:00 am

The Islamic holy month of Ramadan has a different atmosphere compared to the other months of the year. Even though Muslims are familiar with it, foreigners such as diplomats also experience Ramadan's uniqueness with traditional elements like iftars and mahyas – the huge, illuminated signs hung from minarets

Diplomats from the United Kingdom, Australia and New Zealand in Turkey are using the opportunity of living in another country to experience and learn about the Muslim holy month of Ramadan.

"The feeling of togetherness" that Ramadan creates, as well as "the beautiful festive spirit" and "the atmosphere around iftar dinners" are wonderful, they told Anadolu Agency (AA).

The first half of the month is already over, with Muslims all around the world fasting, praying and coming together to enjoy fast breaking, or iftar, dinners.

"During Ramadan, I like the city even more: It becomes quieter and more relaxed, and the atmosphere around the iftar dinners in the evenings is friendly and welcoming," U.K. Consul-General to Istanbul Leigh Turner told AA. Turner is even happy with the traditional, Ottoman-era street drummers waking up the faithful for the pre-sunrise sahur meal at 2:00 a.m. Turner also talked about "the huge illuminated slogans hung from mosques during Ramadan" – known as "mahya" in Turkish.

Another Ramadan tradition, mahya-making is kept alive by only three men throughout Turkey. The huge illuminated signs are erected between mosques' minarets and deliver brief and to-the-point moral messages. "They make the skyline of Istanbul even more spectacular than usual," Turner said.

A special Ramadan taste, "pide" – a unique type of bread – is what surprised Australian Ambassador to Turkey James Larsen. "I love it," he said, adding: "In fact, all the traditional iftar food is delicious. So, I enjoy gatherings at mealtime this time of the year very much." He also referred to the municipalities all across the country that organizes large-scale iftar dinners for their neighborhoods: "This isn't just dinner; it is clear that these events create a feeling of togetherness in the community."

In Istanbul's historic Sultanahmet Square, for instance, around 12,000 people have been eating and praying together from the first day in order to enjoy the Ramadan spirit. "This can only be a good thing," said Larsen, adding that he has not been frustrated by any aspects of Ramadan. "I feel at home because in Australia, we have many different cultures, and an important part of the Australian community is Muslim."

Stating that last week in Melbourne, a Turkish Islamic community group held a street iftar at the city's High Meadows Mosque, attended by some 2,000 people, Larsen said: "The whole concept of fasting is a great opportunity to empathize with those who are not as fortunate as ourselves."New Zealand Ambassador to Turkey Jonathan Curr also believes that the message of Ramadan – of peace, charity and goodwill – to all people is a very important one. "It needs more people to share this message and these feelings with the non-Muslim world. Many in the West misunderstand Islam because they only see the actions of people that are reported in world news," he said. "Ramadan is a great time for Muslims to share the message of how their faith really is, not only the fasting and the feasting, but the true beauty of Islam and its teachings."

Having a number of Turkish and Muslim friends, Curr enjoys "the different customs and rituals in Islam and learning about the religion too." However, he was surprised to see that there are many people who were not fasting. "This is because my last posting was in Egypt where there was huge social pressure on all Muslims to fast. I like the fact that in Turkey, people feel free to observe Ramadan as much as they can or as much as they choose."

Curr, having tried fasting before but only for a day or two and always while drinking water – is not sure whether he could do it for the whole month of Ramadan: "I would be worried about the impact on my work, especially not being able to drink water – and coffee – during hot weather and long summer days." He thinks the biggest disadvantage of Ramadan is "the challenge of remaining productive at work."

Larsen has not tried fasting before, while British diplomat Turner did a 48-hour fast for charity when he was at university. "But we were allowed to drink water. I am impressed by all those who can go without food and drink throughout the daylight hours in the peak of summer," Turner said.

In the U.K., where Islam is the second-largest religion after Christianity and the Muslim population constitutes around 5 percent of the total population, "Ramadan is widely observed," Turner said. "It is wonderful to think that as we sit down to our iftar dinners in Turkey, others are sitting down to iftar dinners across the world – including, allowing for time differences, many in the United Kingdom."