Montreal: A taste of French flavor in Canada 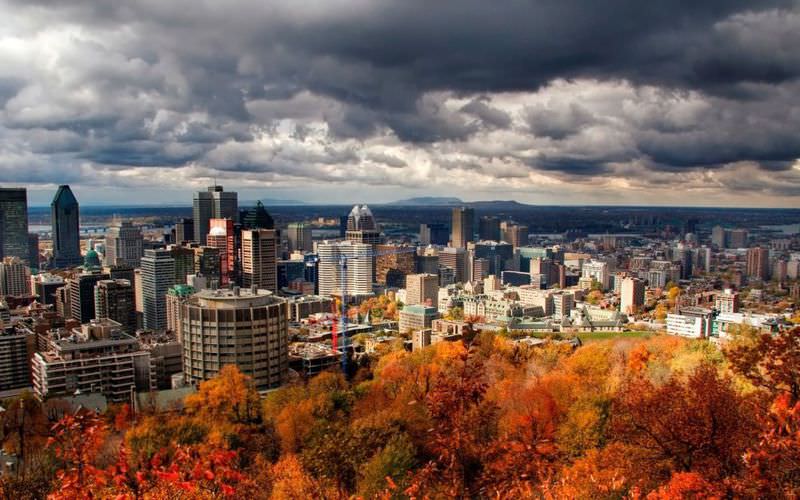 Although Montreal seems far away from Turkey, recently the distance has become shorter as Turkish Airlines launched direct flights from Istanbul to Montreal on June 3.
by Mehmet Çelik Jul 12, 2015 12:00 am

With its many art galleries, boutiques and unique cafes surrounded by incredible gothic architecture, Montreal shines as a cultural and tourist capital of Canada thanks to the city's assets, including galleries, theaters and festivals

When one thinks of visiting Canada, Toronto is the city that typically comes to mind, as it is the most populated Canadian metropolis. Toronto, a small version of New York City, offers almost everything that a typical North American city would offer, which is in many ways a lot different from a typical European city. That could also be the case for other Canadian cities, however, Montreal, the French-speaking city of Quebec, with its unique taste of European flavor, is an exception to this norm. It offers itself as blend of North American culture of modernity mixed with French-inspired romantic European spirit – the best of both worlds.

Montreal is a metropolis that will engage any visitor with its unique blend of old and new architecture from the 18th to 20th century designs, its rich and exciting food scene – whether be it a small restaurant in a hipster neighborhood or fine dining – its year-round festivals, its museums and, of course, extensive shopping opportunities.

While in Montreal, a few neighborhoods are a must-visit for anyone that would like to experience the real taste of the city. Getting around the city is relatively easy, as you can walk, bike, take a cab or take the metro to go almost anywhere.

As one would find in all North American cities, downtown Montreal is the shopping hub. However, it presents itself as a unique exhibition of buildings ranging from old 18th and 19th century brownstones to modern skyscrapers and accompanied by neo-Gothic churches. Downtown Montreal is also the home of great restaurants, art galleries and museums. The hectic downtown rush is replaced with a rather relaxed ambiance in the evening, where you can enjoy a cafe or restaurant with friends, especially in the summer, unless there is a festival.

A unique fact about downtown is that it also offers a moving life underground as well . There are 32 kilometers of connected passageways for pedestrians, where many shops and restaurants are located, in addition to Montreal's metro. Many downtown buildings are also connected to each other by the underground network. If you are not in the underground shops, you will be spending your time shopping on St. Catherine's Street, where you will find many of the international brands.

Old Montreal is easily the most romantic district of Montreal with its cobblestone streets that host many restaurants, art galleries, small artisan boutiques and many unique cafes in its 18th century photogenic architecture. Its historical charm will engage you whether you are in Old Montreal during the day or at night. In this district, you will want to visit Place d'Armes, a square that hosts a monument that was erected in memory of Montreal's founder, Paul de Chomedey. Here, you will also want to visit Notre Dame Basilica, a masterpiece of Gothic architecture built in 1824, in addition to old banking buildings on Montreal's old "wall street" that almost function entirely as museums now.

Plateau is another neighborhood that one must visit during a trip to Montreal. It is a very historical and cosmopolitan part of the city. Plateau has a bohemian atmosphere that mingles with trendy cultural spirit. This is where you can enjoy a lazy breakfast or an afternoon espresso at a boho-chic cafe or patisserie. Furthermore, you could find second-hand bookstores, old multicolored houses with typical outdoor staircases, which represents Montreal's unique architectural heritage and truly reflects its residents' colorful urban lives. If you are in Plateau, you should visit St. Viateur Bagel,.

Montreal also has its own Little Italy, Greektown and Chinatown, similar to many other North American metropolises, as part of its multicultural history. In addition to its Anglo-French population, there is also a large Jewish community, Portuguese community and North African community in Montreal, which add to the city's colorful flare.

Westmount and Outremont are the city's posh districts, where the city's wealthy own luxurious villas. While Westmount is primarily English, Outermont has been the place for the ritzy French to live.

While in Montreal, smoked meat, bagels and poutine (French fries smothered in cheese curds and gravy) are the must-eat foods. You could visit Schwartz's Deli or Main Deli for smoked meat, St. Viateur Bagel in Plateau – where they make more than 10,000 of Montreal's famous fresh bagels each day – and Poutinville for Montreal's famous poutine. Cafe Olympico in Plateau is a great place to have an afternoon latte in case you have not already tried Canada's famous Tim Horton's coffee. If you would like to get the taste of the region's famous maple syrup, you could also visit Marche Jean-Talon, the city's largest market.

If Paris is the city of lights, Montreal is the city of art and design. Its unique neighborhoods that house many theaters, art galleries and dance studios, where many artists, writers and musicians, combined with the many festivals the city hosts, help bolster the city's reputation as an international cultural hub. The Festival International de Jazz de Montreal is a headline festival that draws millions of passionate music-lovers for great music. Each year, hundreds of international musicians participate in this great event that offers programs in various jazz genres, in addition to other genres that have been added in recent years. Another festival that is famous to the city is Just for Laughs, one of the world's largest international comedy festivals that runs after the jazz festival every summer. Just for Laughs hosts more than 1,000 artists' performances each year, and is visited by more than 2 million festival-goers. In addition to festivals, Montreal's Fine Arts Museum – one of Canada's most prominent museums – exhibits a permanent collection of 41,000 works in its unique buildings that are each from various architectural designs and eras.

Although it seems far away from Turkey, recently the distance has become shorter as there are now direct flights from Istanbul. Turkish Airlines, which in recent years had launched direct flights from Istanbul to Toronto, launched direct flights between Istanbul and Montreal on June 3. Direct flights by Turkish Airlines to Montreal, which was also one of the main sponsors of this year's Montreal International Jazz Festival, provide incredible convenience for many travelers from Turkey to Canada, as it lets you avoid the hassle of transfers and lengthy layovers.
Last Update: Jul 13, 2015 10:15 pm
RELATED TOPICS