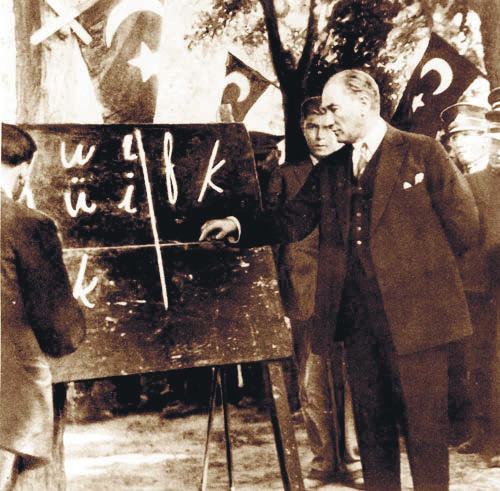 Last week marked the anniversary of the establishment of the Turkish Language Association by the founders of the Turkish Republic. Language has always been a much-debated issue in Turkey since the language reform, and for many years, the association has been the control mechanism over the Turkish language

One of the key characteristics that sets Turkey apart from its European and Middle Eastern neighbors is its language.

A member of the Oghuz Turkic family and spoken by around 170 million people across Eurasia, Turkish has long been a source of national pride, with many Turks quietly pleased with their "difficult," agglutinative tongue. But the language's proximity to other domestic and neighboring tongues has given it a rich legacy of foreign influences, from Arabic to Farsi, with later additions from French, Italian and English.

This week celebrates the 83rd anniversary of a local institution that has left its mark on Turkish: The Turkish Language Association (TDK). Instituted as part of the sweeping social reforms enacted in the first 10 years of the Turkish Republic, the TDK – established in Ankara on July 12, 1932 – bears the mark of the state's founder, Mustafa Kemal Atatürk. "The Turkish nation, who can achieve protecting its country and freedom, should also protect its language from the oppression of foreign languages," Atatürk said. This regulatory body would later become something of a control mechanism over the public's use of the language amid cultural tussles over the use of Arabic as a religious language.

The TDK started with two main aims: One was to encourage linguists and historians to study the Turkish language, and the other was to find solutions to grammatical and lexical disputes. Professor Mehmet Kara from Ankara's Süleyman Şah University believes that establishing the TDK was "a significant step for the Turkish language." "With such an institution, scientific work on the language became more disciplined. More language-related work appeared at the corporate level."

Citizens, however, were already dealing with a series of radical reforms on language. The TDK's establishment came just four years after the sudden alphabet change from Ottoman to Turkish script in 1928. An overnight change from one writing system to another became one of the most drastic and criticized reforms of the time; many Turks had to live in a new society where they could not read even a simple letter in the new alphabet.

Implementing a Turkish-language call to prayer from the country's mosques in 1932 was another language reform. Those who insisted on saying the prayer in Arabic could be sentenced to three months in prison, a state of affairs that lasted until the 1950s. All such reforms on language had the aim of purging Turkish of foreign words, including those which were actively used by the public. Turkey is not unique in this: France's Academie Francaise rails against encroaching English words in French. Iceland too has gone to major lengths to keep loanwords out of its unique language. A cultural war in the Canadian province of Quebec, which has strict guidelines on the display and use of French, is another example of language sensitivities.

Times change, however, and there is now a more relaxed attitude to the "purity" of Turkish. Speaking to Anadolu Agency (AA), TDK President Mustafa S. Kaçalın stressed: "It is quite normal that Turkish has borrowed many words from different cultures because Turkish is an unsettled language. As Turks were a nomadic people, they learned something new everywhere they went, and they added new terms to their language. It is our wealth; we should not be complaining about foreign words in our language."

Kaçalın is critical of the decisions to eliminate a number of foreign words that were a natural part of the Turkish language, which were removed by the association in the past and replaced by invented-but-Turkish neologisms that "destroyed the diversity in the language."

What was done by the institution was akin to "language racism," the president said, adding that the best work by the TDK was to re-popularize Turkish-language literature.

Today, the clearest duty of the association is "to answer language-related questions of the state and the public," Kaçalın said.

Like similar language watchdogs in other countries, the TDK supplies correct translations for new terms. "Bilgisayar," for instance, is a translation that is easily accepted by the public instead of "computer." "Another good example could be 'dolmuş' instead of 'minibus,'" Kaçalın added, referring to the shared taxi busses that speed through many Turkish cities.

The TDK coins and campaigns for the Turkish equivalent of new loanwords, "however, this is not an institution that should be undertaking social engineering," Kaçalın emphasized. "All the institutions – hospitals, courts and others – satisfy the [public's] needs; they do not impose the truth on people. So, it is the people who should embrace correct Turkish."

Kara, an expert on Turkish language and literature, agreed. "If the Turkish equivalent of new loanwords is not adopted by the public, then the work of scholars around the table means nothing," he said. At times during its eight-decade history, the TDK prioritized publishing books, while it focused on information science in other periods, Kara said. "Today, the focus is again on publishing books," he added.

Another mission of the TDK today is to publish official Turkish dictionaries, specialized guides for glossaries or idioms, a Turkish writing guide and linguistics books. There are also hundreds of books and three periodicals, including the Turkish World Journal of Language and Literature, published by the TDK "to reach the public and to maintain cultural heritage," Kaçalın said.

Among the most significant works that the association has published to date are the "Diwanu Lugat al-Turk" by Mahmud Kashgari – the first comprehensive dictionary of Turkic languages – as well as "Kutadgu Bilig" (Wisdom That Brings Happiness), written by Yusuf Khass Hajib in the 11th century.

The TDK's president, appointed by the Turkish president, along with 20 permanent members, constitutes the scientific board of the institution. It also includes around 20 advisory experts in different fields of language studies and more than 50 employees. The association holds periodic meetings, sometimes inviting language experts from across the world to discuss solutions to problems regarding Turkish language – a key aim for one of Turkey's first-established and still-functioning institutions.
Last Update: Jul 15, 2015 9:54 pm
RELATED TOPICS