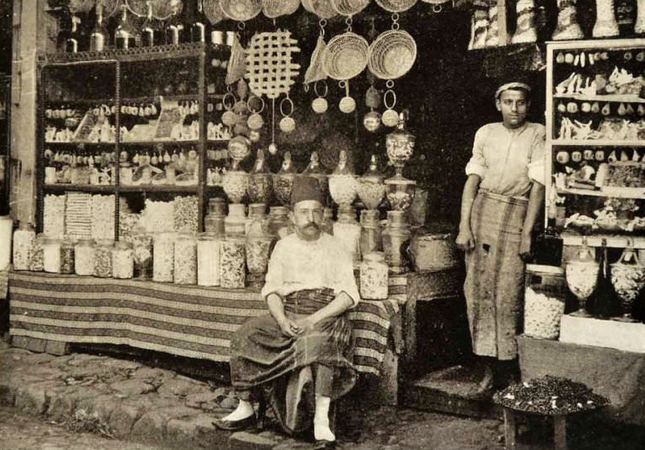 Today marks the first day of Eid al-Fitr, one of the two holiest holidays for Muslims. Even though people see it as an opportunity to take a vacation, we should see it as a chance to come together and spend time with our friends and family

Humans have a conservative side. As time passes, they always remember the past in a good way and yearn for everything belonging to that past, and usually ask about where the old religious festivities are. In the past, human relations were better, yet the conditions have changed and modernism has transformed our lives.

Each revolution has attempted to replace its own 'national days' with religious holidays. Even Oct. 29, the day in which the Republic of Turkey was founded in Ankara, was declared as an official holiday. On that day there were senior bureaucrats who wore suits and hats and paid visits to their neighbors. However, they were unable to create interest.

Religious holidays are joyful days. Islam advises Muslims to entertain and spread cheer on these days. These are the days that religions advice people to enjoy and spread cheer. Eastern people get happy and sad, together. Only in American films can you see people who entertain themselves or feel sad on their own, saying "Leave me alone." Religious holidays are an opportunity to come together. These are colorful days away from monotony. People feel happy when they see someone they love. It is a psychological condition. Meeting with relatives is psychological therapy. Although relatives can come from different social statuses, they feel happy when they see each other. Their mood and tolerance improves. Seeing relatives also helps people face problems much easier.

Today, people generally want to spend religious holidays on vacation. Family relations are not as strong as they were in the past. Business life is harder and people have less time for themselves and their families. They take a break from their busy life on religious holidays. This is probably why we should excuse those who go on vacation on such days.

Globalization has turned the world into a small village. Humans are unavoidably struggling to protect their values, or at least their psyche. We cannot restore the past, but the desire for meeting with other people, entertaining ourselves and forgetting busy life, all of which are the essentials of religious holidays, will continue, as they keep societies alive.

As every religion has its own festivals, there are two religious holidays in Islam. The first one starts immediately after the fasting month of Ramadan and is three days long. It is called "Eid al-Fitr." Muslims observe the ritual of sacrificing an animal during the second religious holiday "Eid al-Adha." It starts 70 days after the first one and is four days long. The hajj, Islamic pilgrimage to Mecca, ends at the end of this holiday.

There were two holidays that the people of Medina enjoyed during the Hijra. Prophet Muhammad said: "Allah changed these two holidays with another two days, which are better. These are Eid al-Fitr and Eid al-Adha." The Ansar, the Medina citizens who helped the prophet and other Muslims during the Hijra, liked entertainment. This is why festivals passed with joy in Medina. Muhammad al-Bukhari and Muslim ibn al-Hajjaj reported an incident experienced by Aisha, wife of Prophet Muhammad, when she was a little girl as follows: "On a religious holiday, some Ethiopians came to the courtyard of the mosque and played tilting. The Prophet Muhammad called me and I joyfully watched it." They reported another narration. "When Abu Bakr went to see his daughter Aisha on the day of a religious holiday, he saw two concubines playing tambourine and singing a song. Upon his reproach, the Prophet Muhammad said, 'Leave them Abu Bakr, they are enjoying their holiday." On religious holidays, even fasting is prohibited. 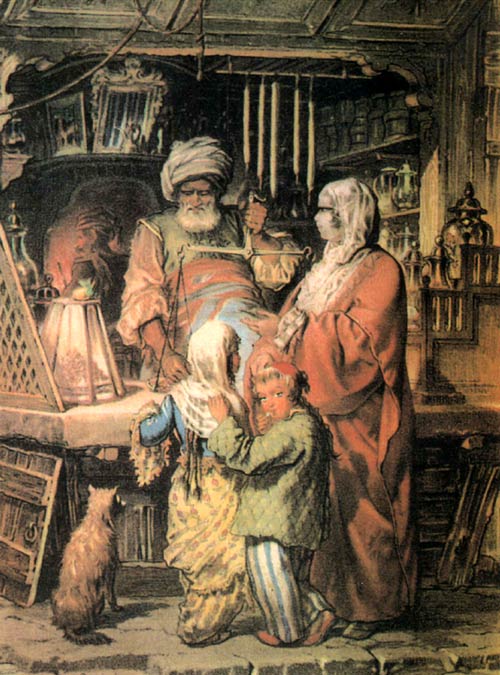 Painting of an aged Hacı Bekir weighing out candy (often assumed to be Turkish Delight), painted by Vittorio Amadeo

Every special day has its own desserts. Walnut-filled baklava is the popular dessert of Eid al-Adha and Eid al-Fitr. Arabs make baklava (sweet pastry) with pistachios and serve it with clotted cream. Confectionaries like "akide şekeri" (rock candy), "lokum" (Turkish delight) and almond paste are bought beforehand. Previously, different jams were served in small spoons on a tray. Later, for some reason this tradition was abandoned. It was presumably because other confectionaries became more common in the market. First, coffee and water are served to visitors and then desserts come. Sometimes, desserts are served with "ayran" (a beverage made from yogurt and water) as desserts suppress the appetite, but ayran works up the appetite.

Elderly people are visited on the first day of eid days. Relatives gather at a dinner or breakfast at the house of an elderly family member. Entertainment is organized for children. People do not forget to visit cemeteries. In every neighborhood, there is an "awliya" (saint) whose tomb local people go to see whenever they have a problem and to feel relaxed. Awliyas' tombs are visited during religious holidays. In Istanbul, people always pay a visit to Eyüp Sultan's tomb. This tradition still continues today.

There is a special prayer following the sunrise on the first day of religious holidays called "Salah al-Eid". Men perform this prayer together in mosques. Those who do not regularly pray even attend the Eid prayers and take their children with them. While men pray in mosques, women prepare breakfast at home.

Eating dessert prior to the eid prayer is recognized as Sunnah (sayings and traditions of the Prophet Muhammad) on Eid al-Fitr. Therefore, Eid al-Fitr is called "Sugar Feast" among elderly. It passes more enjoyable than Eid al-Adha, which is observed with the sacrifice of an animal and distribution of meat.

Giving presents on religious holidays is also a tradition. In old days, before the eid, poor people were given food packages or a tray of baklava. If a couple is engaged prior to Eid al-Adha, the groom's family is expected to send a hennaed and ornate ram with a gold coin on its horn to the bride's family. Among visitors, children especially are always given presents. In the past, giving a handkerchief and socks as a present was a tradition. Money was put in the handkerchief or socks, as it was not considered nice to give it directly. During religious holidays, especially children are well-treated and brought to amusement parks generally described as "festival areas."
Last Update: Jul 17, 2015 1:51 pm
RELATED TOPICS