Syrian refugees hold on to life in historical Fatih district 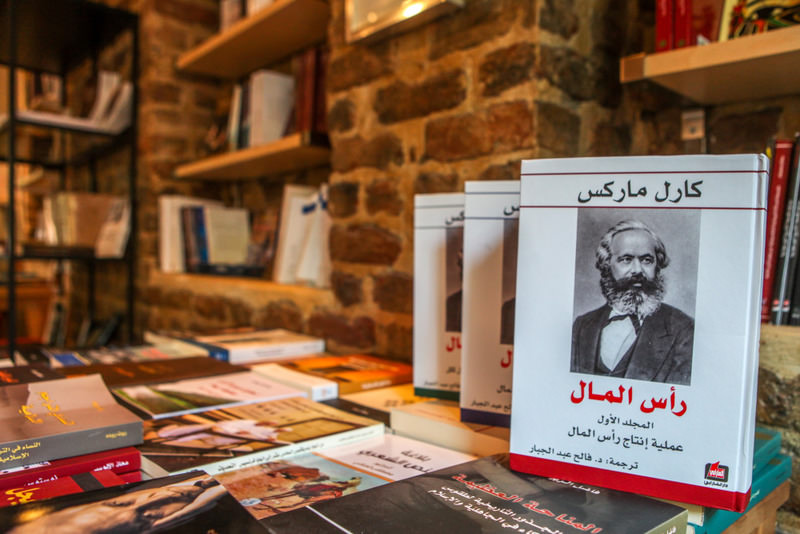 A multilingual bookstore in Istanbul's Fatih district that was established by Samer el-Kadri and Gulnar Hajo the Syrians who fled to Istanbul after the war started.
by Lila Hassan Jul 19, 2015 12:00 am

Turkey is home to the most Syrian refugees, sheltering nearly half of 4 million displaced Syrians. Many of them continue their lives in refugee camps in southeastern Turkey, however some 15 percent in cities such as Istanbul, are running various businesses and trying to sustain a proper life as they did before the war

Abu Omar – the name he agreed to be referred to as for legal immigration status reasons – stands on a corner of Turgut Özal Millet Avenue every day selling Syrian food products on a makeshift table of boxes and wooden stools barely reaching his knees. He sells packaged coffee, cheese, spices and pickled carrots and peppers.

"I used to get all of these products by the [Turkish-Syrian] border. People passing in and out would bring them," he explained. Turkey's stricter border protection since the recent influx of refugees from the fighting in Tal Abyad last month, however, has stalled his unofficial imports.

Over 24,000 refugees were admitted into Turkey last month alone.

Nevertheless, Abu Omar's "corner store," as it were, is just one of the many Syrian stores, restaurants, cafes and services found on Millet Avenue in the Fatih district of Istanbul.

As of July 2015, the government of Turkey has registered over 1.8 million Syrian refugees according to U.N. High Commissioner for Refugees (UNHCR) data. Roughly 350,000 refugees live in Istanbul, according to official Turkish sources, with the number still growing.

Many Arab refugees hailing from Syria reside in the Fatih municipality of Istanbul, a newly forming Arab enclave for refugees in the historical peninsula of the city. Middle-class refugees' rental prices can range from TL 300 to TL 400 ($110 to $150) per month in this largely working-class area, little compared to the touristy and more developed areas of Istanbul, which go from anywhere from TL 600 to over TL 1,000 per month. However, many Syrian refugees also occupy rooms in flats or rundown buildings lacking electricity or running water for TL 100 TL 200 in poorer parts of Fatih and surrounding areas.There are 50,000 Syrian refugees estimated to live in Fatih.

In recent months, Fatih has become a permanent and semi-permanent home to passing Arab refugees and a well-known immigrant district to residents of the city. Millet Avenue is the central street of the district, becoming a Syrian hub sprawling with Syrian eateries, bakeries, tourism offices, international shipping companies, real-estate agencies and translation services offices. Arabic and Kurdish are perceivably spoken on this street more than Turkish.

Salloura, a Syrian bakery located right off the tram stop that marks the beginning of the Millet Avenue stretch, employs Syrians. Customers walking in and out of the bakery can be heard exchanging hellos and orders in Arabic, only occasionally sharing a "merhaba," Turkish for hello.

Mahmoud and Seif, two employees at Salloura, offer samples of Syrian sweets to customers while packaging them into boxes.

Seif, who arrived from Aleppo two years ago, said he is happy he can find work at all. "It's not easy when you don't know the country you're trying to live in."

Many stores and service offices along Millet Avenue preferably and sometimes exclusively employ Syrians in an effort to keep them from resorting to begging and homelessness, disregarding labor laws that require a minimum amount of Turkish workers. The government, however, allows them to continue working uninterrupted.

Despite a growing community of camaraderie and support in Fatih, Istanbul and Turkey are not Syrians first choice to flee to or settle in.

Though the two countries share the same majority religion, many Syrians do not speak Turkish and the increasingly high number of Syrians in Istanbul has led to a developing prejudice over their growing presence. Some reports show a growing impatience among Istanbulites for Syrians' growing presence in Istanbul. Residents of Fatih held demonstrations in 2014 to voice their unhappiness about sharing their neighborhoods with so many Syrians.

Conducting a study on Arab migrants in Istanbul, Kristin Sarah Biehl of the Institute of Social and Cultural Anthropology and the Centre on Migration, Policy, and Society (COMPAS) at the University of Oxford wrote in a commentary published in the peer-reviewed journal, Insight Turkey 2014: "Migration channels and motives are equally variable with some groups arriving on tourist visas, others on fake passport, and others by crossing the borders undocumented; some have come to Istanbul with the purpose of working, others seeking asylum, while others plan to transit on to Europe."

However, many Syrian refugees struggle to obtain visas to travel and settle in Europe and simultaneously cannot return home to Syria for safety concerns, waiting in limbo until the conflict subsides or settling into their new lives in Turkey.

Turkey, which has maintained an open-door policy since the beginning of the conflict in 2011, has more Syrian refugees than any other country in the world.

Since the beginning of the conflict, the country has spent over $4 billion on the refugee crisis and provides healthcare to refugees along with free schooling and temporary protection. Lauded for its reaction to the influx of Syrian refugees, Turkey has consistently called for assistance from the international community to assist with the humanitarian crisis.

With the refugee crisis growing and the Syrian conflict's end unseen, more streets like Millet Avenue are going to be seen around Istanbul and Turkey.
Last Update: Jul 19, 2015 9:29 pm
RELATED TOPICS