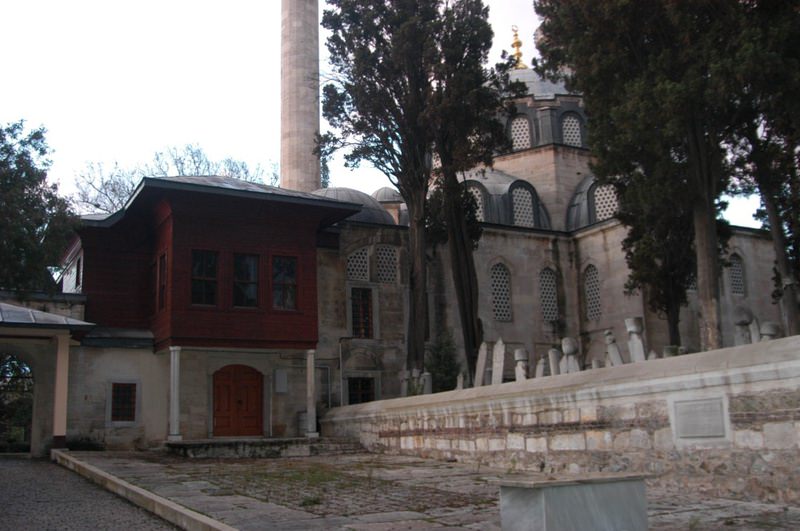 There are many historical monuments around Istanbul that were sponsored by powerful women throughout history, mostly by the Sultan's daughters and wives. One of them, the Atik Valide Mosque and Complex in historic Üsküdar district, which was constructed by famous Ottoman architect Mimar Sinan, presents an architectural masterpiece

Istanbul can be defined as the city of Sultanas due to the touch of female grace in every nook and cranny of the city. You can easily see the indelible marks remaining from the powerful women of history by looking at the historic masterpieces all around the city. Üsküdar in particular is home to many monumental buildings founded by the dignified ladies of the Ottoman harem carrying their names, such as Mihrimah Sultan Mosque (İskele Camii), Emetullah Rabia Gülnuş Sultan Mosque (Yeni Valide Camii) Nurbanu Sultan Mosque (Atik Valide Camii), Mahpeyker Sultan Mosque (Çinili Camii) and also Gülfem Hatun Masjid.

Sultanas endowed their personal wealth generously, commissioning fountains, mosques, hospitals, public kitchens, schools, aqueducts, bridges, orphanages, baths, birdfeeders, neighborhood tax-paying funds and dowry funds throughout the empire. Especially Valide Sultan (the Queen Mother), Kadınefendi (wife of the sultan) or the daughters of the sultan would come to the forefront by founding waqfs and funding them with their personal budget so that they competed against one another in doing good deeds. The sultanas best known for endowing their wealth for good deeds were Haseki Hürrem Sultan, Mihrimah Sultan, Şah Sultan, Bezm-i Alem Valide Sultan, Mahpeyker Kösem Sultan, Safiye Sultan, Hatice Turhan Sultan and Rabia Gülnus Emetullah Sultan and Nurbanu Sultan.

Nurbanu Valide Sultan was probably the most significant person of charity in the empire, who came to forefront of Ottoman history and was one of the most powerful women in Ottoman History as well. She was the wife of Selim II and became Valide Sultan as the mother of Sultan Murad III. She was the first Valide Sultan to come from slavery. There are different theories about her origin. She was originally either a Venetian named Cecilia Venier-Baffo or a Spanish Jew named Rachel Olivia de Nasi. She was around 12 years old when she was captured by the Ottoman Navy and taken to Topkapı Palace as a slave. She grew up in the harem and converted to Islam. It is claimed that as Haseki Hürrem Sultan, the wife of Süleyman the Magnificent, noted for her beauty and intelligence, she was named "Afife Nurbanu" which means "shining." When she became Valide Sultan, she ordered Mimar Sinan to build the Atik Valide Mosque and Complex in the district of Üsküdar in Istanbul.

There is a story about this mosque - like all other mosques – that has been told by the people: Nurbanu Sultan was well-known and respected for being a pious and practicing believer. Nurbanu Sultan was highly sensitive about waste and for that reason she collected crumbs in her palm and ate them after each and every meal. Her daughter-in-law Safiye Sultan found this behavior very odd and regarded it as inappropriate. Safiye Sultan criticized her mother-in-law and complained about her habit to her husband Sultan Murad III. One day while they were having dinner together, Nurbanu Sultan collected the crumbs as usual and when she was about to eat them, her son Sultan Murad III asked her what she was holding in her palm. Nurbanu Sultan kept silent so Sultan Murad III repeated the question more harshly. Finally when his mother opened her palm and showed him the crumbs, he couldn't believe his eyes. All those crumbs turned into shining pearls. Sultan Murad III came to his senses at that moment and apologized for his offense and begged for his mother's blessing. Nurbanu Sultan's headscarf got caught in the blowing wind and asked his son to build a Külliye (great complex) where the scarf fell. The scarf was found at the top of a hill in Üsküdar. Mimar Sinan immediately began to plan an elegant complex to be named "Nurbanu Valide Sultan."

This Ottoman complex is considered one of the greatest of its kind, in terms of its size, in Istanbul. It's construction started in 1577 under the patronage of Nurbanu Valide Sultan at a time when famed Ottoman architect Sinan was an old man. And the complex was completed in the same year of the sultan's demise in 1583. While the complex used to be called "Valide Camii," from the 18th century onwards it started to be called names such as "Eski Valide, Valide-i Atik" or "Atik Valide," which means Old Mother Queen to distinguish it from the complex built in Üsküdar İskele Meydan (pleft square) and named "Yeni Valide" or "Valide-i Cedid" (New Mother Queen) by the patronage of Emetullah Gülnuş Rabia Sultan, mother of Sultan Ahmet I in 1708-1710.The complex was composed of a mosque in the center and a madrasah parallel to the mosque sharing the same courtyard, a dervish lodge that is on the left side of the mosque on the same street, a primary school, an imaret (soup kitchen), a caravansary, printing house, a school for Quran reciters, a Turkish Bath and a Daruşşifa, which was designed as a full-scale hospital. The treatment and needs of the patients admitted to the darüşşifa were funded by revenues from the land properties donated by Nurbanu Sultan.

The buildings of the complex are spread and lined up on a large rugged stretch of land and the streets were made to be passed through. Today only the mosque and the Turkish Bath continue to function in accordance with their purpose of establishment. The rest of the complex lost its peculiarity because of the fact that a part of the complex had been used as a prison. Currently, this section of the complex has been renovated by Fatih Sultan Mehmet University. When the complex was originally completed by architect Sinan, it consisted of a hexagon center section. The construction was expanded with the addition of two domes on both sides. Due to Sinan's age, the extensions were made by his assistant Davut Agha. The last revisions of the mosque were made in the era of Sultan Mahmud II in 1834 and a pavilion having an independent entrance as a gathering place was built at the southeastern end of the mosque.

This complex can be deemed a farewell from the great architect Sinan, the master of the domes, who shaped Ottoman architecture in the 16th century with his many masterpieces. He displayed his extraordinary talent and provided a lesson in the architecture of the 16th century with Atik Valide Mosque's cupboards ornamented using mother of pearl, marble work on the mihrab (niche of a mosque indicating the direction of Mecca) and mimbar (pulpit) and ceramics. İznik tiles were put on the walls on the two sides of the mihrab, which was designed with a flower vase composition. Since the domes are surrounded by many windows divided with ceramics in between, the ceramics shine bright. These İznik tiles were last used in this mosque before the era of Kütahya ceramics began. Sinan designed a bright and well-lit mosque for Nurbanu Sultan by using many windows and white marble that reflect her name "shining."

We can claim that the Kadınlar Mahfili (the private place for the performance of prayer by women) of Atik Valide is the most beautiful and precious among all the mahfils in other mosques. Another special thing about this beautiful mosque is that the first mahya (a message written with lights) was placed between the center of the two minarets in 1722.

The courtyard of the mosque is a perfect gathering place for the people with the Şadırvan in the middle, which was designed perfectly with pillars made of white marble. There are two plane trees that were planted when the mosque was first build, an Ottoman tradition. These two centuries-old plane trees provide a natural air conditioning service in the summer. Of course I have to mention the oldest Cedrus Libani in the Middle East, which is in the center of the Cervansary, which is being renovated today.

When the holy month of Ramadan comes, the people of Istanbul visit sacred places such as Eyüp Sultan, Sünbül Efendi, Aziz Mahmud Hüdayi Hazretleri and Hırka-i Şerif. Some people prefer performing their Teravih prayer in different Selatin mosques each and every night of Ramadan. These has all become traditions being practiced during the holy month. When I read the book "Art of living in Istanbul" written by Prof. Haluk Dursun, I put the Nurbanu Atik Valide Sultan Complex on my visiting list. I followed Prof. Dursun's recommendation by visiting the Atik Valide Mosque during Ramadan and I made it a habit. For many years I have been visiting the Külliye of Atik Valide before iftar time and enjoying the open-air museum.

I highly recommend you visit the Nurbanu Atik Valide Sultan complex in the summer time. Drink your tea while sitting on a bench under the old plane trees and enjoy the pervading smell from the linden trees and the sweet touch of the breeze on your face. When you walk around the complex you will feel like breathing the history of Istanbul and, I assure you, it will feel like you have never visited a mosque built by the great Sinan before. Because this is his last masterpiece, this is his farewell.
Last Update: Jul 24, 2015 11:33 pm
RELATED TOPICS