Legacy of Salloura Bakery continues in Istanbul via refugees 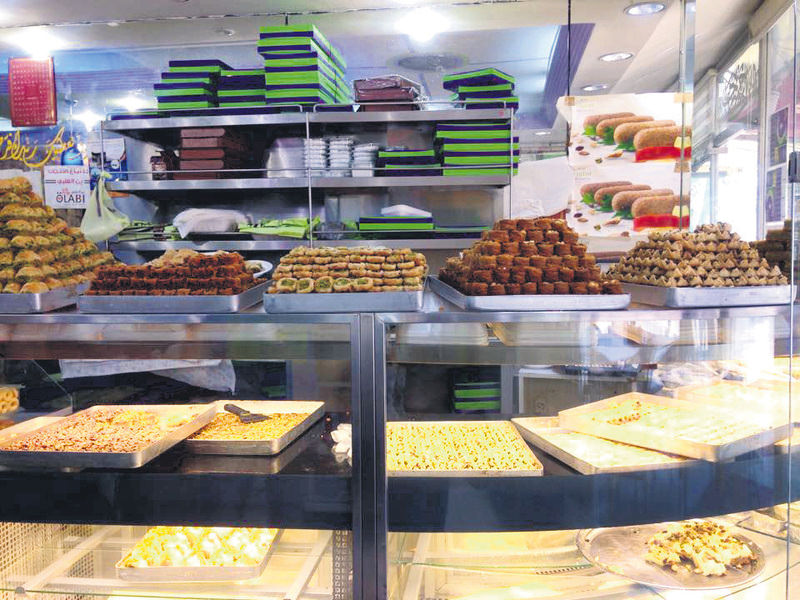 Samir Salloura and his family left Syria when the civil war began in 2011. Bringing their hometown legacy with them, they have since established Salloura bakeries in cities, including Istanbul where they have made new lives for themselves

Baklava, a traditional Turkish dessert pastry filled with nuts and drizzled with honey, is a hallmark at bakeries and restaurants throughout the country. Not exclusively Turkish, the dessert originated in the Middle East and is popular among countries throughout the Arab world and the Mediterranean.

Among these countries is Syria.

Samir Salloura, the owner and manager of Salloura Bakery, established his profession in baking and selling baklava and other Syrian and Middle Eastern deserts throughout the three countries his family has sought refuge in since the Syrian conflict began in 2011: Syria, Egypt, and Turkey.

Salloura has lived in Istanbul for almost two years. Prior to immigrating to Turkey, Salloura left his hometown of Hama, a city located on the West-central region of Syria, to settle in Cairo, Egypt, where his family opened their first branch of the bakery outside of their home country. Opening last summer during Ramadan, the Istanbul bakery is located on Millet Avenue, a street famous for its adopted Syrian culture in a growing Syrian enclave of the Fatih district. In addition to the 13 branches of the bakery in Syria, the family has three other branches throughout Istanbul as well as one in the southern city of Mersin. He chose to open a branch of his family's bakery in Istanbul because "after Ankara, Istanbul is a big, touristic city and there is a big Syrian population here."Like many Syrians living in Fatih, Salloura left Syria because of the civil war that erupted after the 2011 uprising. "The living situation, corruption and worsening conditions" pushed him out. However, he still wants to return. "Any person who loves their country, of course, sees no other place for himself or herself," he said.

The name Salloura, Samir explained, is the name of his family and the name of the bakery because it originated in their Syrian hometown. Famous for the bakeries associated with it, he said: "If you ask anyone about the name 'Salloura,' they'll tell you about the cakes and shops."

The Salloura baking tradition began with Samir Salloura's grandfather. His grandfather began making and selling cheese pastries, which Salloura said he was famous for in Hama and contributed to the establishment of the family's name as bakers.

Despite the desire to return, Salloura said he is settled in Istanbul and sees himself here long-term. "I'm comfortable. Of course, I want the crisis to end and I want things to calm in my country. But I don't know what's going to happen in the future. Everything is bad in my country right now." Salloura lives in Istanbul with his parents and sisters.

Syrians, for the most part, make up the work force in the bakeries throughout Istanbul. Salloura said that he employs a majority of Syrian staff throughout Istanbul for patriotic reasons. "My first priority is to help my country," he said, adding: "People have to work here." He applies the same practices to the branches in Egypt.

As of July 2015, the Turkey has registered more than 1.8 million Syrian refugees, according to United Nations refugee agency, UNHCR, data. Roughly 350,000 refugees live in Istanbul, according to official Turkish sources, with the number still growing.

In recent months, the historical Fatih district of Istanbul has become a permanent and semi-permanent home to passing Arab refugees and a well-known immigrant district to residents of the city. Millet Avenue is the central street of the district, becoming a Syrian hub sprawling with Syrian eateries and bakeries, tourism offices, international shipping companies, real estate agencies and translation service offices. Arabic and Kurdish are perceivably spoken on this street more than Turkish. Many stores and service offices along Millet Avenue preferably, and sometimes exclusively, employ Syrians in an effort to keep them from resorting to begging and homelessness, disregarding labor laws that require a minimum amount of Turkish workers. The government, however, allows them to continue working uninterrupted.
RELATED TOPICS