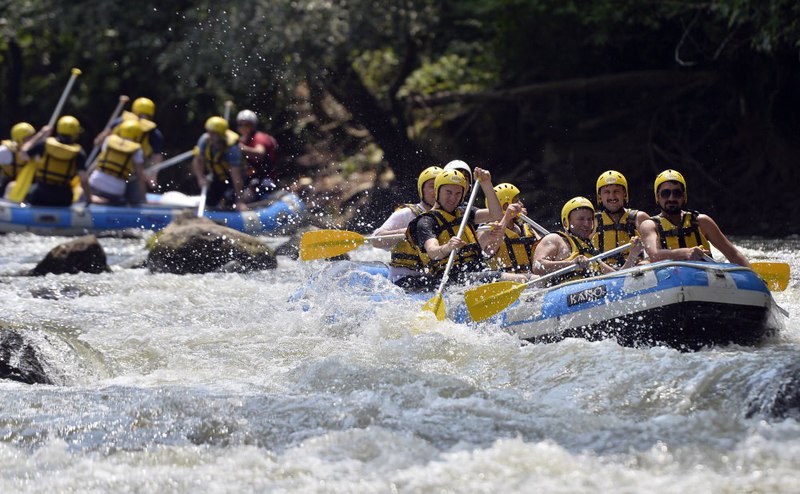 With its isolated environment and close location to the Turkish metropolises, Düzce has become a popular destination offering rafting adventures on the Melen Stream, which is 11 kilometers long

Düzce has become the latest destination people wanting to spend a different kind of fun-filled weekend. Home to unique rafting routes, Düzce has become popular with scores of local and international tourists due to its proximity to Istanbul and Ankara. While we were planning a classic weekend in Istanbul with breakfast, a cup of coffee on the beach or maybe going to the cinema in the evening, we heard about the Düzce Municipality's rafting organization.

We hit the road in a minibus and after two hours found ourselves on the banks of the Melen Stream, running along with a gurgling sound. Our destination was Cumayeri. Only two hours ago, we were driving among thousands of cars accompanied by honking horns but as soon as we arrived in Düzce, we found ourselves in a totally isolated environment. After having breakfast under the huge trees, which even cover the blue sky, we began preparing for rafting. We were anxious about how we would travel along the rushing river, as none of us in the group had ever rafted before. The instructors told us the important details about the sport and we finished our preparations. Although we thought the river was moving quite fast, we learned that the river's flow is at a lower level at this time of year.

People usually go rafting in March and April when the water is three meters higher than in the summer. Our group consisting of six people carried the boat to the river and our journey began. Another six boats like ours were carried to the river and we let ourselves join the flow with our professional guides. Then we began to paddle for 11 kilometers through the rushing water. After about five kilometers, we arrived at a resting area. After paddling for kilometers, rafters can drink their tea cooked over a wood fire and relax by swimming in the shallows of the river. After relaxing for half an hour, we got back in the rafts with some other people and began paddling. From time to time, we were drenched all over when we came across the wildest part of the river, but we kept on going. We were not only soaked by the waves, but were also splashed by other rafters' paddles - a tradition, we were told. As we did not know about this tradition beforehand, we sacrificed a few items that we took before getting on the boat. We completed the 11-kilometer route in three hours. We did not even feel any exhaustion the next morning due to the adrenalin.

Following our rafting adventure, it was time to give an old transportation vehicle called a "Zipline" a go. This vehicle was used in the western Black Sea region to carry things across rivers. When you throw yourself toward the rushing water after being tied up with metal wires and ropes that are used in mountaineering, you find yourself crossing the river at an incredible speed. Although technology has been developing non-stop, this vehicle is still being used in regions whose geography is similar to the western Black Sea region. We planned to eat fish on the Akçaoca beach and head back home. We found ourselves in a nice seaside restaurant and ordered our meals. We waited so long that we began joking maybe they went to catch the fish after we ordered. To our shock, we learned that they had indeed caught the fish after we ordered. We spent our weekend in the ice cold water and under the huge trees in this hot weather. We were very tired when we got in the car and we found ourselves in Istanbul having slept through the journey.

Mayor Mehmet Keleş said that nearly 25 million people are living in the provinces around Düzce and continued: "You might think you are in the Amazon as you paddle through the 11-kilometer rafting park. Here, everything is natural. We did not prepare this area artificially. We invite 25 million people living around here to discover this place and experience this adrenalin sport."

The rafting venue is accessible by following a signboard situated on Cumayeri, near the Istanbul-Ankara D-100 highway. Visitors are advised to take towels and underwear with them. You do not have to know how to swim and patients with heart disease are not advised to participate. Visitors can either come by their own cars or buses. The price is 150 TL between March and April, the most enjoyable time for rafting. In other months the price is TL 100, which includes rafting, tea breaks, insurance and safety equipment.
RELATED TOPICS