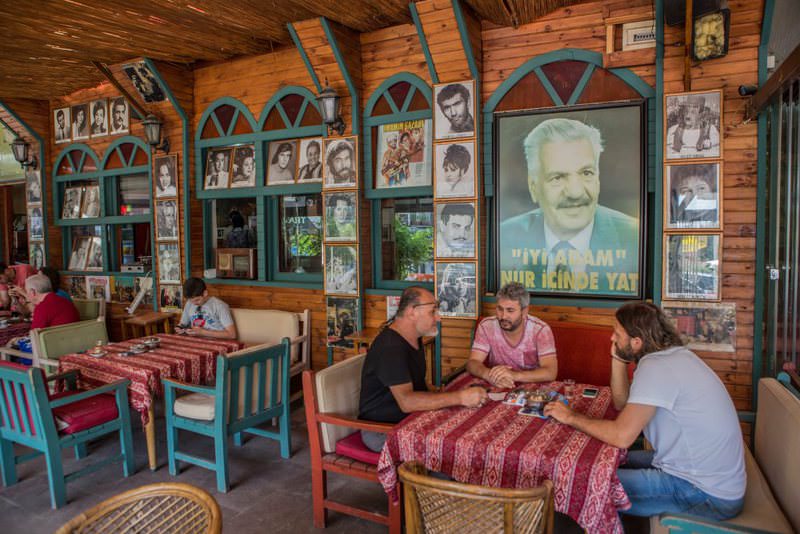 Even though many of Istanbul's old coffeehouses have been transformed into modern cafes, some famous ones, which were scattered throughout the city in Ottoman times, have survived and continue to invite individuals to experience old Istanbul's gentlemanly ways

Embracing the Turkish motto that translates to "coffee is just an excuse, the chat is marvelous," we hit the road and visited Istanbul's veteran coffeehouses. During our tour of the old surviving coffeehouses, we heard people sadly asking, "Where is the old Istanbul now?" and "Where are the old Istanbulites whose talk was so sweet?" But as Hilmi, the owner of Kuğu Kıraathane in Kuzguncuk highlighted, the historical coffeehouses have either been transformed into modern cafes or have closed down. When we asked about the regulars of the old coffeehouses, Hilmi said, "They have all passed away." But still, there are places where the talk is cheerful and hopes linger, if you know where to find them.

Located on the sea front, İsmail Ağa Coffee House in Kanlıca is a calm and peaceful place. Founded in 1870 by Rize-based İsmail Ağa, the coffeehouse once hosted Mustafa Kemal Atatürk, the founder of the Republic of Turkey, and the second president of Turkey, İsmet İnönü. Opened for business in 1930, it began to make a name for itself with its famous Kanlıca yogurt. Although the coffeehouse has been modernized to fit in with the 21st century, the great grandson of İsmail Ağa, Aras Sipahioğlu, 31, still looks after the coffeehouse. "My grandfather used to tell me that this place hosted Istanbul's gentlemen back in the day. Author Reşat Nuri Güntekin and poets from Beykoz used to come here. My childhood was spent here," Sipahioğlu said. The coffeehouse, which is regularly visited by writer Haşmet Babaoğlu, is still the most serene coffeehouse in Istanbul.

Next, we arrived at Hazzopula Passage, which was built in 1871 and is located next to Galatasaray High School on İstiklal Avenue in Beyoğlu. While we were admiring the nostalgic atmosphere of the passage, the sign in Turkish reading "We do not have any brunch" caught our attention. We also noticed that everybody in Mustafa's place was chatting with each other. Ağrı-based Mustafa Kayacan, 60, is a real character. "This place is 105 years old. Iranians managed this place before us. I used to work with them. I managed to take over the coffee shop in 1985. We mostly served the shopkeepers of the passage who were Greek, Armenian and Jewish. Back then, the old Istanbul culture was very different. Over time, the people living in the area began to sit in the small alleys that crisscross Beyoğlu and drink tea. People come to my place to have a conversation. We do not keep tabs, play music or cards. The conversation gets deeper with tea and coffee. We become friends and have heart-to-heart conversations," Kayacan said.

Afterwards, we found ourselves in Mandabatmaz, located on Olivia Street, opposite one of the famous buildings of Beyoğlu, Mısır Apartments. As soon as we took a step inside the coffeehouse, Erzincan-based Cemil Filik, 63, said: "There is no such place in Istanbul; you cannot find a cup of coffee like the one you have here." The place is a century old and used to be run by Iranians. Filik started working with them, and later borrowed money from the people in the area and took over the coffeehouse with his brother. "I have been here for half a century. We used to serve the shopkeepers around here. When the tramway passed by here, we put out a table and some chairs. The taste of our coffee has become famous. We have regular customers who have been coming here for 40 years," Filik said. While we were talking, I asked about the name of the place. Apparently, the cafe gets its name from an exaggeration. It is said the remaining "telve" (coffee grounds) are so thick that even a buffalo would not sink if it stood on them. So, the name of the place came to be called "Mandabatmaz." Artists, politicians and actors are regulars of the coffeehouse.

Known for his villainous characters in old Turkish films, actor Erol Taş owns a coffee shop in Cankurtaran. The walls of the shop are covered with photos of the leading actors of Yeşilçam. Osman, whose nickname is "Biber" (pepper), has been working at the coffeehouse for the last 14 years. "There is a spot where Erol Taş sits every time he visits. People come from all over Turkey just to meet him," Osman said. Selim Velioğlu, 57, is currently managing the coffeehouse. Nevin Taş, 65, the sister of Erol Taş and the "mukhtar" (village head) of the Cankurtaran neighborhood for the last 20 years, stops by the coffeehouse every day.

Located in the garden of Firuz Ağa Mosque in Cihangir, Asmalı Kahve has a history that dates back a century. The coffeehouse used to welcome Istanbul's Greek community before they migrated to Greece in 1975. The coffeehouse is now called Firuz Ağa Tea Garden. Artists, politicians and locals are the regulars of the place. Hüseyin Yorulmaz, 40, who has been a regular for 20 years, said: "This place is similar to the coffeehouses in the villages. People come and meet with other people they know. Everybody can share his or her opinion. Instead of sitting at a cafe, I prefer it here as it is warmer. People want to get away from the luxury of the metropolis. There is no class difference here. You can chat with whoever you want."

Hilmi Kuğu, 75, is the owner of Kuğu Kıraathane in Kuzguncuk. The place is 68 years old, although it has been offering its services under the name of "Kuğu" for the last 49 years. Kuğu's sons Metin, 54, and Temel, 52, are following in their father's footsteps. "There used to be coffeehouses on every corner, but they have been transformed into cafes. We are trying to keep the coffeehouse culture alive," Hilmi said. Metin chimed in: "When the cult Turkish TV series 'Perihan Abla' and 'Ekmek Teknesi' were shot here, this place was very popular." Hilmi added wistfully: "This place was wonderful once. We lived together with Armenians, Jews and Greeks. It was joyful. Old Istanbulites were gentlemen."

Çorlulu Ali Paşa Madrasah in Çemberlitaş operated as Arapgir Student Dormitory before the 1980s. However, the place was closed due to the military coup and turned into a coffee shop. Although its official name is "Erenler," the place is still called Çorlulu Ali Paşa. Fruk Gülpekmez, 57, the owner of the coffeehouse, said: "There was no coffeehouse near the university. As our name spread, writers, politicians and young people became regulars. Our place is known for its "tömbeki" and conversational atmosphere. Actress Bergüzar Korel and former Energy Minister Hilmi Güler visit here. As this place reflects the Ottoman coffeehouse culture, it has been used as the set for some TV series and films. There are 11 rooms in the coffeehouse and the seating arrangement helps people have deeper conversations. Regulars of the place consider the coffeehouse their home. Mehmet Hayri, 53, who has been coming for 30 years, said he longs for the old conversations with friends.

Şark Coffee House in Beyazıt also attracts people's attention with its historical atmosphere. The place is a hotspot for tourists and is famous for its coffee cooked in sand. Ömer Altuntaş, 37, who has been working at the coffeehouse for the last 14 years, said: "We invented this cooking style by ourselves. Others later copied us. Regulars prefer us because of the taste that sand gives to the coffee."
RELATED TOPICS