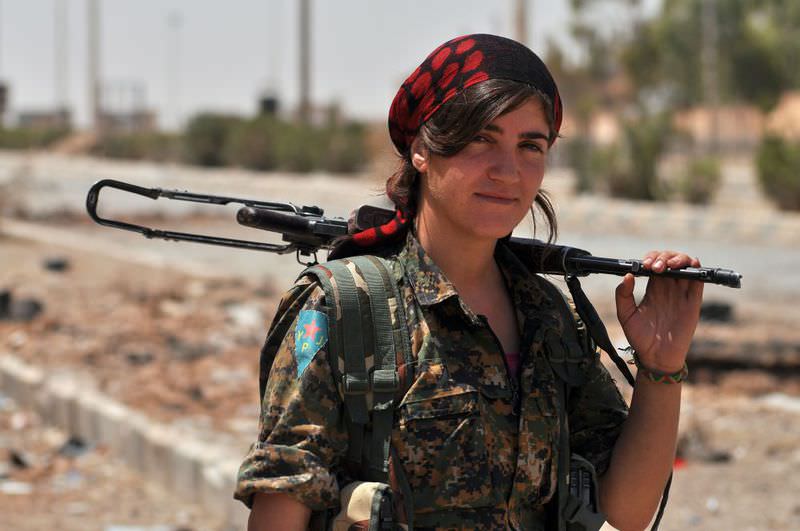 PKK and YPJ forces are represented as ,heroes, that fight the ,evil, terrorist group ISIS, although both are recognized as terrorist groups by the United States and European Union and are currently becoming a national security threat to Turkey.
by Mehmet Çelik Aug 20, 2015 12:00 am

As Turkey continues to struggle with two internationally recognized terrorist organization, ISIS and the PKK, the Western media's partiality in its coverage of the terrorists has caused a stir. While they emphasize ISIS radicalization, they praise the PKK, even though the organization has kidnapped 2,000 children and forces them to fight 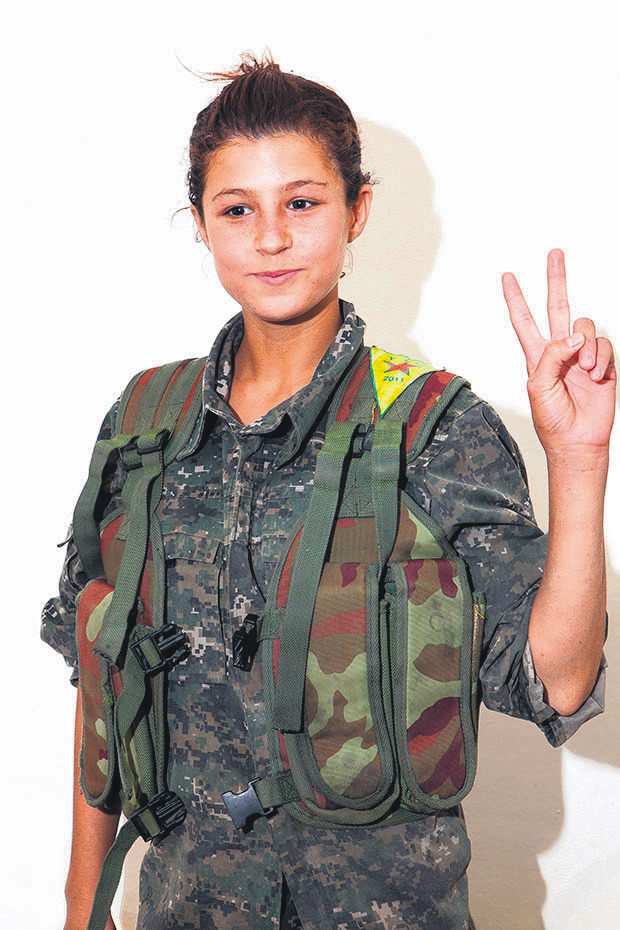 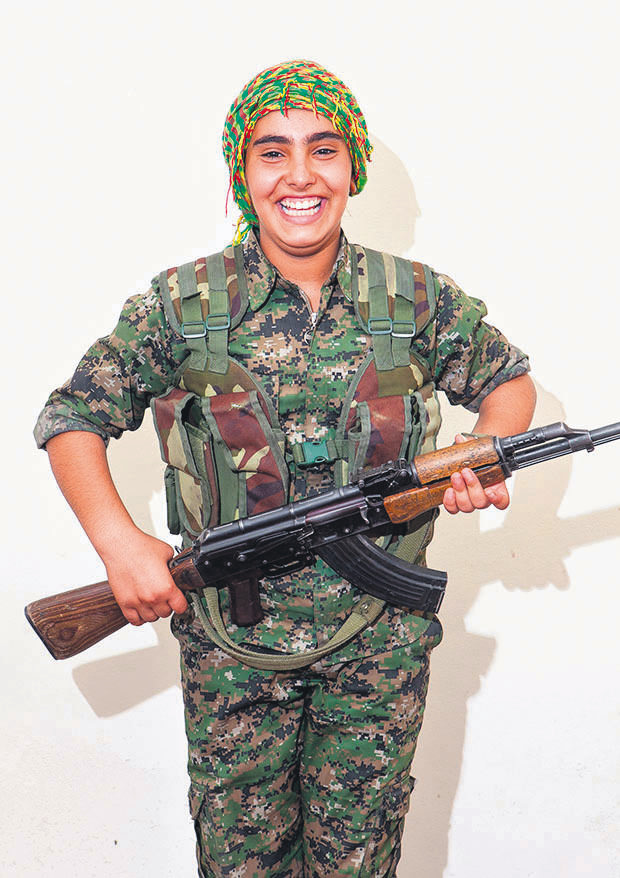 Mizguin Emraly (L), 14, and Hevedar Mohammed, 12. These child soldiers were glorified for fighting against ISIS in Marie Claire's article "These Remarkable Women Are Fighting ISIS. It's Time You Know Who They Are"

In recent months, there has been a wide-ranging distortion in the Western media with regards to covering terrorism or the terrorists involved in the chaotic turmoil in the Middle East, which resulted from a power vacuum and political instability in both Syria and Iraq. The distortion is particularly vivid in Western media's coverage of two terrorist groups [both listed as terrorist groups by the international community], the self-proclaimed Islamic State of Iraq and al-Sham (ISIS) and the PKK, which Turkey has declared as a threat to its national security.

The emergence of ISIS in the post-Syrian uprisings in 2011 has brought forward a discourse on radicalization of the European youth, as the terrorist group has drawn many young Europeans, both men and women, to join its militant group fighting in Syria and Iraq. While the discourse has been a topic discussed by academics and the media, the structural reasons behind the radicalization of the European youth has been mainly ignored, and Islam or "Islamism" has been blamed, rather than blaming the root causes, such as poverty and marginalization of the immigrant youth, for such "radicalization" and "terrorism."

At the same time, the re-emergence of PKK forces fighting against Turkey's security forces in its southeastern region and northern Iraq have caused a buzz in the Western media regarding the young and female fighters joining its lines and their "heroic" acts, without the acknowledgment of the PKK being a recognized terrorist group and the fact that the same "youth" is also being radicalized.

The dichotomy in the portrayal of the two terrorist groups has helped the perception management regarding ISIS and the PKK, while the former has been rightfully shown as evil, the latter has become a subject of fashion magazines and its fighters shown as "heroes."

While ISIS's monstrous beheadings and killings of civilians rightfully make it top news, the inhumane treatment of the People's Protection Units (YPG) has been ignored by the media, aside from the right groups. Human Rights Watch reported in its June 14 report that there has been "arbitrary arrests of the [Democratic Union Party] PYD's political opponents, abuse in detention, and unsolved abductions and murders." The report also shows "the use of children in the PYD's police force and armed wing, the People's Protection Units (YPG)." This has not made it into many of the Western mainstream media outlets, let alone to their headlines. 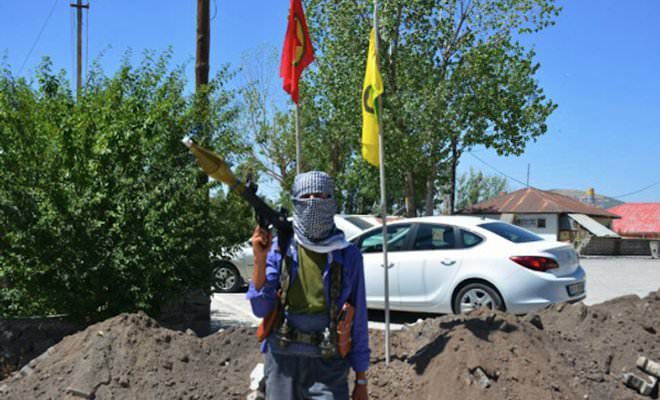 One can simply "Google" the terms "PKK women fighters" and hundreds of search results come from Western media outlets singing praise to the heroism of young women. Such coverage neutralizes a terrorist group that has been the cause of the loss of more than 40,000 lives in its clashes with the Turkish state in the last three decades. For example, Marie Claire's article titled "These Remarkable Women Are Fighting ISIS. It's Time You Know Who They Are" is one of these articles showing YPJ [the female unit of YPG, an-offshoot of the PKK, recognized as a terrorist group by Turkey] fighters as heroes fighting for a revolutionary cause. Here, while the article subjectifies the "woman" it also fails to touch on the fact that they have been "radicalized" by a terrorist group. The same article was also published by Esquire magazine. Such publications are of particular importance, as their readership mainly comprises women. Moreover, in addition to "heroization" of the terrorists in the media, the same mentality has used it for its capitalist profit-making machine. In 2014, fashion retailer H&M released a collection inspired by YPJ fighters' clothing, again which can be seen as an attempt to "neutralize" a terrorist group. Though the retailer has apologized for this move, the attempt cannot be explained as a naïve fashion move.

While such coverage attracts a large readership base, it also commits a sociological fallacy with regards to reading Middle Eastern women in general and Kurdish women in particular. As such, the reading of Kurdish women through PKK/YPJ fighters also serves the reductionist images of Kurdish and Middle Eastern women, without acknowledging her role in societal construction throughout the centuries. Such narratives, mainly coming from Weberian Orientalist readings, ignore women's role in Middle Eastern society, seeing her as the oppressed secondary citizen, lacking agency and backward, in addition to views that blame women for their own oppression.

In fact, the Western media's distortion is multi-faceted regarding its attempt to neutralize such a terrorist group. On the one hand, PKK/YPJ forces are shown as "heroes" that fight an evil terrorist group, ISIS. On the other hand, although both are recognized as terrorist groups and are currently seen as a national security threat to Turkey, the ISIS imagery is highlighted for its danger against the international community, while the image of the PKK/YPJ is dimmed. In addition to dimming the PKK threat to Turkey's national security, it is also highlighted in its fight against ISIS and they are shown as revolutionary heroes fighting against an evil group. Moreover, Turkey is shown as fighting against "Kurds," while it fights against a terrorist group and not its Kurdish citizens. In addition, it is portrayed as not fighting strongly enough against ISIS, which kills the Kurds in northern Iraq.

Although such motivations seem as a complex perception management attempt, it is really rather simple. The Western media's "anti-Erdoğan obsession" motivates it to side with one terrorist group, while demonizing the other. Turkey fights against both terrorist groups both within and outside of its borders and sees them as threats to its national security. However, the dynamics of its efforts in the fight against both terrorist groups are not and should not be expected to be the same, as the PKK has been around for more than three decades, while ISIS has emerged recently as a result of a political instability in Iraq and Syria.

The Turkish Air Force has been carrying airstrikes against the PKK in northern Iraq and the ISIS militants in northern Syria.
Last Update: Aug 20, 2015 9:46 am
RELATED TOPICS