An oasis in the heart of a rumbling city 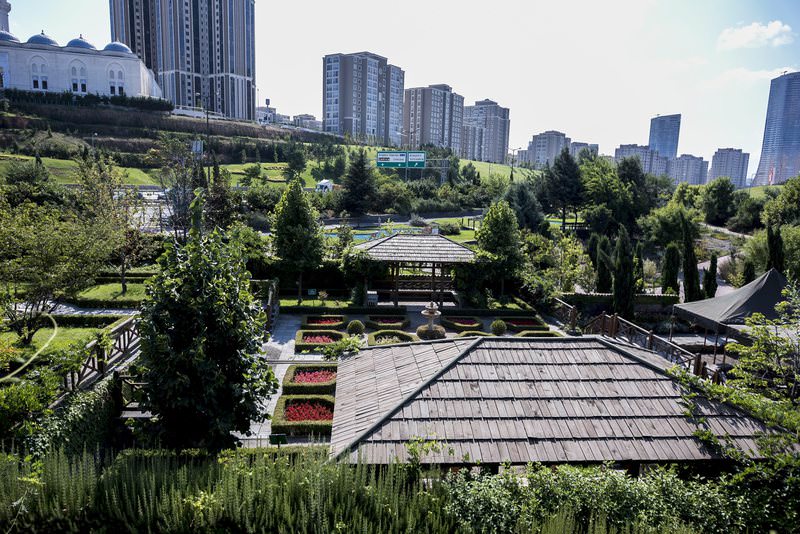 Surrounded by two highways, a botanical garden located in Istanbul's Ataşehir district offers a sigh of relief to city-dwellers with more than 1,500 plant species. The garden, visited by more than 170,000 people annually, also offers drawing workshops for children

The Nezahat Gökyiğit Botanic Garden (NGBB) in Istanbul's Ataşehir district looks like an oasis at the intersection of two main highways. The garden has 11 structures that resemble islands formed by the highways, and visitors can access different sections through tunnels. Harboring 20 different bird species, such as geese and ducks, and with bees whizzing around, the garden has a 20-year history.

Upon the death of his beloved wife, Nezahat, Nihat Gökyiğit decided to establish a memorial garden for her. Enriched over years, the place turned into a well-known botanical garden in Istanbul. This year, the garden celebrates its 20th anniversary. Renowned as the world's first botanical garden established in-between highways, the NGBB attracts 170,000 visitors annually. Each plant, flower and tree is grown with special care. There are 1,600 plant and tree species along with 600 others at risk of extinction. Extending over an area of more than 113 acres, the central island is the garden's biggest section and where the administrative units are located. There are 10 more sections, three of which are called "Ertuğrul Island," "Istanbul Island" and "Recreational Island." A team of 36 people arrives early in the morning and tends to everything in the garden.

While walking around the garden with Deputy Manager Salih Sercan Kanoğlu, we learned various details about the plant collections. We first stopped to examine a collection of bulbous plants. The garden contains in its collection 420 of the 726 bulbous plant species that grow in Turkey. The team is eager to grow all bulbous plant species in the future, though. They not only create plant collections or look after plants at risk of extinction, but also travel to different cities and bring more types to the garden. "You do not need to go somewhere else to see tulips, a bulbous plant species. One of the missions of a botanical garden is to gather plants that are grown in the country's different regions," Kanoğlu said, adding that they also want people to see and learn about them, especially since each city has a unique plant or flower. "We grow nearly-extinct plants in our garden. Then we take them and re-plant them in their original location," Kanoğlu said.

The NGBB is not only a bulbous plant collection, as many other plant types are on display. Each garden section is designed differently. During our visit, we saw another garden reminiscent of an archaeological excavation area. The section was called "Kurak ve Çorak Bahçe" (Drought and Barren Garden), featuring plants resistant to drought and salinity. Enthusiastically talking more about their future goals, Kanoğlu said: "There are concrete findings that the earth is increasingly suffering from drought. Here, we grow plants that can survive with little water and excessive salt. Our garden is open to researchers willing to study these plant species."

The staff members arrive at the garden at 8:00 a.m. and work until 6:00 p.m. Each island has a special team, including plant experts. Furthermore, different experts are responsible for each collection. "Staff members assigned to each island note various information about the plants, like the time of blooming, leafing and seed spilling. Then, we take them out and look after them with care," he said.

The garden's most entertaining section is "Bahçıvan Çocuklar Adası" (Gardener Children's Island). This section is allocated for secondary school children in July and September. Children enjoy gardening on small, 1-square-meter plots. "Every year, we select at least three schools from among the applications," Kanoğlu added. "We make sure we choose two state schools. From October to June, students come and spend at least one hour a week here. They water plants and plant flowers," he said. In June, all students celebrate harvesting time. "Our garden is an ideal place for children living in a big city. They garden and enjoy their time in among the greenery," he said. There is also a drawing workshop where participants learn how to draw plants. The garden's biggest mission is to collect drawings that feature all the plant species in the garden and compile them in a book as part of the Turkish Republic's 100th anniversary celebrations in 2023.

After enjoying a picnic on the garden's Recreational Island, do not leave without paying a visit to the world of plants, which offers a mysterious journey to children.
Last Update: Aug 27, 2015 9:40 am
RELATED TOPICS