Imam Shamil: A pioneer of the Caucuses's struggle for freedom 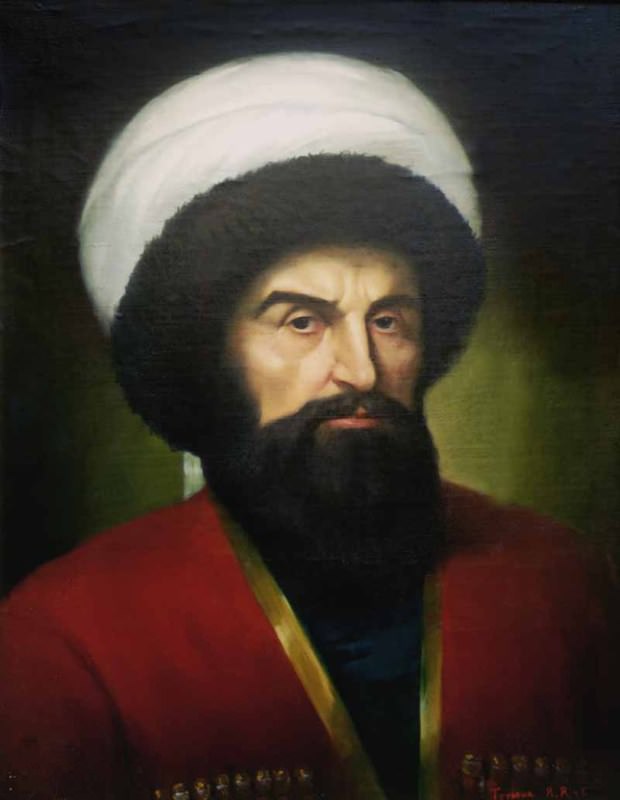 An agreement made between the Russians and Imam Shamil forced him to go to Istanbul with his companions. He was hosted by Ottoman Sultan Abdu00fclaziz I in Istanbul.
by Ekrem Buğra Ekinci Aug 28, 2015 12:00 am

As a member of a noble Avar family, Imam Shamil burned the fire of independence in Dagestan against its Russian oppressors by uniting local tribes. When he was captured after 25 years of heroic resistance, Russian Tsar Alexander II personally met with him and even admired him for his resistance

The area between the Black Sea and the Caspian Sea is known as Dagestan and Caucasia. For centuries, adamant tribes lived an autonomous life in this mountainous location where dozens of ethnicities, languages and their dialects exist today.

Islam arrived in this region from two sides. Georgians, Laz and Circassians living in the Caucasus became Muslim through the Ottomans. Dagestan was already introduced to Islam through Arab merchants in the early centuries of the rise of Islam. Being pressured between the Russian and Persian Empires over years, Caucasus and Dagestan got closer to the Ottomans. Unable to stand against imperial Russia's goals, Muslims in the Caucasus migrated to Anatolia in masses from 1864. The relations between Dagestan and Muslims in the Ottoman Empire date back longer. For some time in the 16th century Dagestan was an Ottoman province. From 1747 onward, Dagestan was invaded by the Russians. The Russian army under Gen. Aleksey Petrovich Yermolov suppressed the people's resistance in 1819. In 1830, tribes in Dagestan declared jihad against Russia. Imam Shamil was the legendary figure who led resistance against the Russians.

Born in 1797, Imam Shamil was the son of a religious and noble Avar family. Avars are a native Caucasian ethnic group that lives in the north Caucasus between the Black Sea and Caspian Sea. Earlier Avars were a Turkic community that established a khaganate extending from Central Asia to central Europe in the sixth century. They laid siege to Istanbul and crossed the Bosporus on horseback. The Avars came apart after Frankish attacks in 805 and mingled among local people in Eastern Europe and the Balkans. Some of them, who settled in Dagestan, learned local language of Lezgi people and adopted Islam in the 13th Century.

Belonging to an ethnicity that marked such history was something like a harbinger of Imam Shamil's bright life. His name was changed from Ali to Shamil because he frequently got sick, and according to a folk tradition, changing someone's name brings health. After Shamil got a traditional education in his village, he was enlightened by Jamaluddin al-Ghumuqi, a sheikh from the Naqshbandi sufi order. He married Ghumuqi's daughter and later went to Damascus to meet Ghumuqi's famous teacher Khalid al-Baghdadi. Shamil gained an advanced level of knowledge in religious sciences. When he returned home, he took part in the resistance against the Russian Empire facilitated by his childhood friend Ghazi Muhammad. Russian forces killed his friend in 1832. When Hamza Bek, who led counterattacks after Ghazi Muhammad's death, was also killed in 1834, Dagestan mujahidin chose Shamil, who was 39 years old then, as their imam.

Shamil re-organized the mujahidin. With a height over 2 meters, an athletic appearance, strength, knowledge, articulation and an unbreakable faith, he gained the trust of people around him. He formed a fully-established military unit against the Russians. These mujahidin became a nightmare for Russian armies. Russians responded with crowded military forces and heavy weapons to Shamil's defiance with basic arms from 1834-1859. The glorious resistance in the Caucasus was heard all around the world.

He established regents in the areas under his control. Five regents formed a province. An emir was assigned to each province responsible for religious and life affairs. Regents collected taxes and soldiers as well as acting as judges. In each village, a "qadi" (Islamic judge) was in charge responsible for maintaining security, writing correspondences to regents and declaring orders to the public. Each regent was also responsible of looking after 300 cavalry men. In villages, a soldier was taken from each 10 homes and his family would be held not to pay taxes. The number of mujahidin reached 5,000 people in 1843. All men aged 15 to 50 had to be adept at horsemanship and using arms because they protected their homes by themselves from attacks. Imam Shamil provided arms partially from both the Ottomans and Persians. However, they had an old, big arms manufacturing plant built in a rocky area in Kubachi.

Imam Shamil had almost a 1,000-member special guard unit. They used to wear green turbans on a papakha made of galyak – fetal lamb pelt. Soldiers appeared in yellow Caucasian attire while officers wore traditional clothes in black. The group's sign was a square-shaped ash gray rag placed on the front of their hats.

Single soldiers were not allowed to marry while married soldiers were forbidden to meet their families during military service. They took a share from captured treasure. Imam Shamil's military forces became famous among the public as whichever village they went to, locals competed to treat them.

The Dargi War was the most famous victory of Imam Shamil's against Russian Imperial forces. A Russian army of 150,000 soldiers surrounded Dagestan and blocked the roads. Following a significant loss, Mikhail Semyonovich Vorontsov, the leader of an advance guard with 18,000 soldiers heading to Imam Shamil's headquarters had to drawback from Dargi on July 25, 1845. Three generals, 195 officers and 3,433 soldiers were killed by Imam Shamil's forces. Vorontsov attempted to burn forests, which he saw as a big advantage for Shamil, yet failed. In 1851, Hadji Murat, a regent of Imam Shamil, joined the Russian forces. Hadji Murat, who escaped with regret and then died tragically, was the protagonists of Leo Tolstoy's famous namesake novel.

Tsar Nicholas I of Russia twice wanted to personally meet Imam Shamil, whom he admired. Imam Shamil sent a refusal to the tsar's letter full of endless promises and bright offers. He was persistent in war and even further declared penalties on those who offered to negotiate with the Russians. Meanwhile, Shamil's mother, who heard about Muslim villagers being tortured by Russians from two Chechens, asked her son to make an agreement with the Russians. It was a very famous account that Imam Shamil ordered 100 strokes of the cane for his mother as punishment, yet it was applied to him as he did not find it in his heart to carry out the punishment on her. After the Crimean War in 1854 during which Imam Shamil's military forces supported the Ottoman army, Russians blocked the roads through where Shamil supplied arms. Russian forces bought some tribes unable to resist. Chechnya fell following a two-year struggle. Small groups left Imam Shamil afterward and Dagestan was entirely surrounded. Still fighting against the Russians, Imam Shamil reached Gunib, a fortified village in Dagestan, with his family. He protected the fortress with his 400 soldiers, yet their number reduced to 100 following artillery fire from 14 well-armed Russian battalions. On Sept. 6, 1859, Imam Shamil surrendered with his two sons.An agreement made between the Russians and Imam Shamil forced him to go to Istanbul with his companions. On the other side, Russians would not collect soldiers in Dagestan. However, Prince Baryatinski, the battle's victorious commander, did not keep his promise. Imam Shamil was brought to St. Petersburg. Tsar Alexander II of Russia tried to please him with an unprecedented ceremony. During the feast in honor of Imam Shamil, the tsar said: "I am proudly honored to host you at our table." Upon the tsar's words, Shamil said: "I would feel honored, if I welcomed you at my table." Following a 10-year obligatory residence in Kaluga, Imam Shamil was allowed to go Hejaz to observe his pilgrimage. He was hosted by Ottoman Sultan Abdülaziz in Istanbul and Khedive Ismail Pasha in Egypt. Shamil could not return to Istanbul after his pilgrimage and died in Medina in 1871. He was buried in the Maqbaratul Baqī' (Baqi Cemetery in Medina).

Imam Shamil's son Ghazi Muhammad Pasha entered the Ottoman Empire's service. He managed the cavalry brigade on the Caucasus front during the 1877 Russo-Turkish War. His other son, Shafi, who was captured by the Russians, became the tsar's aide-de-camp and a Russian general. Said Shamil, his grandson from his youngest son Kamil Pasha, fought for the independence of Dagestan from 1918-1921, yet failed. He died in Istanbul in 1981. The memories of Imam Shamil continued to live in the heart of Muslim communities, especially those that lived under the captivity of Russia.
Last Update: Aug 28, 2015 10:43 am
RELATED TOPICS