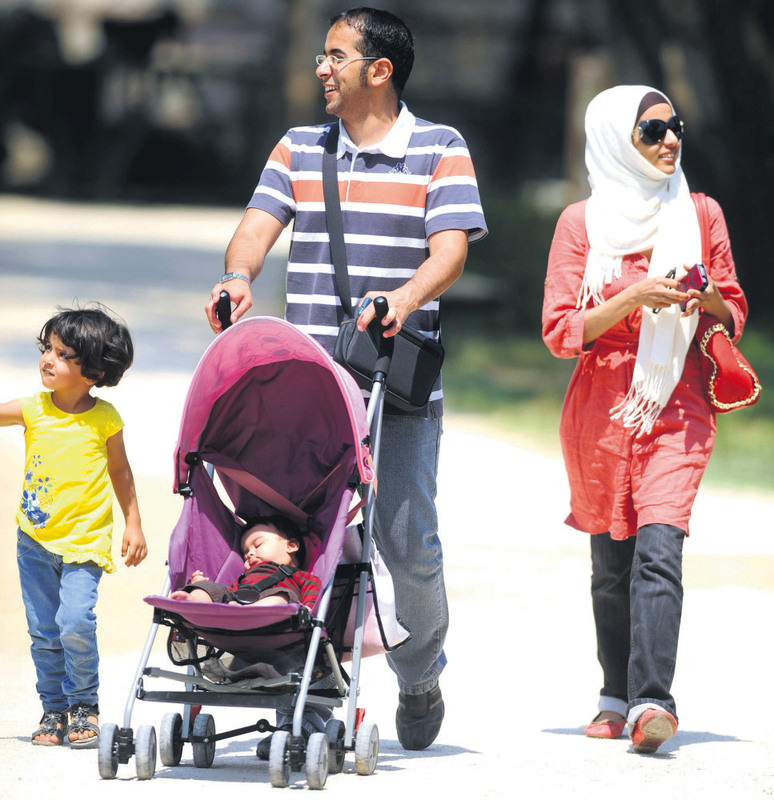 Arab tourists' interest in visiting Turkey has gradually increased, as the country has many tourism options and caters to tourists from different backgrounds compared to the past. While Istanbul, Yalova and Bursa stand out as the first options for Arab tourists, thermal and natural tourism centers boost the numbers as well

Tourism is an important economic sector for many countries. World Tourism Organization data shows that revenues generated by tourism totaled $1.2 trillion worldwide in 2014, which was derived from 1.1 billion tourists.

Many countries try to conceive ways to increase their share from the tourism sector, and invest as well as advertise heavily in order to do so. Some countries, such as the Philippines, Thailand and Panama, experienced a sharp increase in recent years in terms of tourist volume. As one of these countries, Turkey made a significant leap in tourism over the past 20 years. According to Culture and Tourism Ministry data, the country hosted 42 million tourists in 2014, while the number was about 7 million in 1995. There was also a remarkable rise in tourism revenues for the country during the same period, as it totaled $26.5 billion last year compared to $5 billion in 1995.

Diversifying the tourism sector is a main reason for the trigger of this rise. While the country was known in the past mainly for the variety of historical sites and seaside resorts along the Aegean and Mediterranean coasts, Turkey has also become popular for healthcare, culture and spa tourism in recent years, thanks to greater promotion, advertising and investments. These developments also led to major changes of the tourist profile visiting the country. While the country's tourism catered mostly to European tourists in the past, now people from a variety of countries from the Middle East to the Far East choose Turkey as a holiday destination. A group of these countries is the Arab states, as the number of Arab tourists has sharply increased, especially in the last 10 years.

Despite the ongoing civil wars and political unrest in many Arab countries, such as Syria, Iraq, Yemen and Egypt, the number of Arab tourists that visited Turkey have gradually increased every year. According to Culture and Tourism Ministry data, the number of tourists hailing from Arab countries increased 20.1 percent compared to the previous year to reach nearly 2.5 million in 2014. Among these countries, most of the visitors came from Saudi Arabia and Iraq, respectively. Kuwait, Lebanon and Libya followed them. Also, the country hosted 1.2 million Arab tourists in the first six months of 2015, and tourism experts predict that same number of Arab tourists that were hosted last year will be hosted by the end of the year.

Speaking to the Daily Sabah, Association of Turkish Travel Agencies (TURSAB) President Başaran Ulusoy underscored that the variety of tourism facilities available is the most important reason why Arab tourists select Turkey. "Nature tourism, thermal tourism and shopping tourism are the most attractive options for Arab tourists," he said. "Sea, culture and religious tourism are also on the rise among them. While the vast majority of Arab tourists take an interest in Istanbul, provinces such as Bursa and Yalova, which offer thermal tourism with their enormous facilities, have drawn considerable attention in recent years. The flatlands located in the northeastern Black Sea region are also among the favorite places for those seeking tranquility in nature. Places such as Bodrum, Marmaris and Antalya are also in demand for those who want to enjoy a vacation by the sea."

Ulusoy also said the country has great potential stemming from the cultural and religious similarities of Arab countries. "We have very qualified facilities and a high quality of service. Turkey has cities with great tourism potential in various fields, and Istanbul, which was the capital of three of the biggest empires in history, is world-renowned and one of the most visited tourist spots in the world. But we have to introduce serious initiatives to promote other cities too. Arab tourists are curious to explore new destinations," he said.

Remarking that Arab tourists have different characteristics compared to other tourists, Ulusoy said targeting them with specific strategies may help increase the number of tourists. "Arab tourists generally tend to travel with their families. That's why they choose more family-friendly places. Also, their vacations tend to be longer than other tourists. While other tourists stay for three to four days on average, Arab tourists are more prone to stay one week, sometimes more. And most importantly, Arab tourists spend much more than others on average. If Turkey actually suffers from a low income per capita problem in terms of the tourism sector, this is very important growth area for the country and the economy," he said.

Ulusoy stressed five initiatives could be launched to raise the number of Arab tourists, including: Increasing the number of tour guides who speak Arabic, increasing promotion materials and advertisements as well as materials and brochures that introduce Turkey in Arabic, focusing more on online ads through the Culture and Tourism Ministry, and using Turkish TV shows, which have become very popular across the Arab world, to introduce and promote Turkish culture.

He added that the recent terrorist activities in the country's southeast are not expected to decrease the number of tourists. Underscoring that there has not been a single recorded attack attempt at a tourist destination in Turkey until now, he said tourist destinations are not affected by the ongoing conflict and tourists can visit the country with peace of mind.
Last Update: Aug 29, 2015 1:06 am
RELATED TOPICS