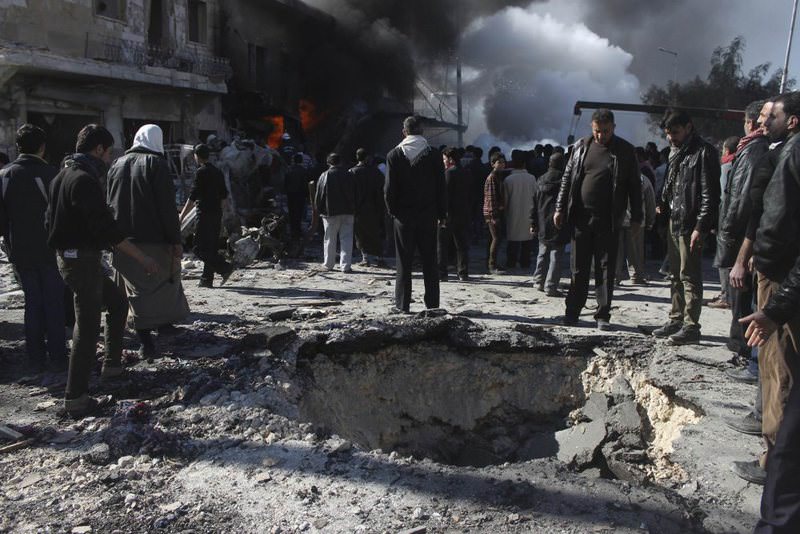 Residents in Aleppo inspect a hole in the ground after shelling with barrel bombs by forces loyal to Syria's President al-Assad.
by Daily Sabah with AA Sep 05, 2015 12:00 am

Barrel bombs are conventional weapons made of metal barrels stuffed with large amounts of explosives, shrapnel and oil, and dropped on residential areas by forces loyal to Syria's President al-Assad. According to human rights groups, barrel bombs have killed at least 2,916 civilians, including 665 children, just in 2015

It has been a tough year for Um Ahmed. The 60-year-old Syrian grandmother lost her husband of 40 years just weeks before Ramadan began after the cottage they built together was bombed by Syrian regime helicopters.

Like thousands of others in Aleppo, Ahmed had to run for her life and take refuge in neighboring Lebanon, where she now lives with 19 other family members in a tiny room on the outskirts of Beirut.

"We used to compete with each other to make the best Syrian dishes, but today, we only have one type of food on a good day, and often, we eat just cheese and olives," Ahmed said.

Staying busy with her grandchildren helps her remember the loss of her husband less. The last time she laid eyes on him was when rescuers pulled his body out from under the rubble of the home they shared for the past four decades. He was barely recognizable; what was left of his face was covered in blood and dust.

Ahmed's house was ravaged by a barrel bomb, a cheap improvised alternative to conventional bombs that have been used extensively in recent years by the Syrian army against areas under the control of opposition groups. These infamous bombs are made up of metal barrels stuffed with large amounts of explosives, shrapnel and oil. They are then manually thrown out of helicopters. But because they lack the accuracy of conventional bombs, they often result in numerous civilian casualties.

Barrel bombs became a more popular weapon in Syria in 2013 after images showing the devastating effects of chemical weapons caused international outcry. But because they are more discreet, barrel bombs are often confused with conventional bombs.

Syrian President Bashar al-Assad has consistently denied his army's use of barrel bombs in its war against armed opposition groups, but he did admit that there are civilian casualties. "We have bombs, and any bomb is about killing," Assad said in a rare interview with CBS News in March. "It is not about tingling people."

Several amateur videos on social media show bombs being manually dropped from army helicopters on residential areas. One video shows locals running toward an unexploded barrel bomb that fell in an open field. The bomb was later defused by local volunteers, who pulled large amounts of explosives, metal objects and oil out of it.

Human Rights Watch (HWR) has documented numerous incidents where barrel bombs have been used since 2013. "Human Rights Watch documented the attacks in Aleppo governorate in northern Syria and in Daraa governorate in the south based on witness statements, satellite imagery analysis, and video and photographic evidence," HRW said in a report released in February titled "Syria: New Spate of Barrel Bomb Attacks."

The Assad regime was slammed with heavy sanctions shortly after the conflict began in 2011, negatively affecting its economic powers. That made barrel bombs the "ideal" cheap alternative to other types of weapons.

The Syrian Observatory for Human Rights (SOHR), a U.K.-based human rights watchdog, said the Syrian regime dropped more than 10,000 barrel bombs on civilian areas during the first six months of 2015.

When a barrel bomb strikes, many victims lose their lives in the initial blast, but many more are stuck under the rubble for hours and often end up suffocating to death.

The Syrian civil war has now entered its fifth year and has caused the deaths of more than 250,000 people including at least 10,000 children with at least 60,000 missing. The war has also displaced nearly 10 million people. While international and regional powers engage in seemingly endless discussions, the Syrian regime reportedly continues to use chemical weapons. About 13.6 million people have been displaced by conflicts in Syria and Iraq, many without food or shelter, the United Nations High Commissioner for Refugees (UNHCR), said. The 13.6 million include 7.2 million displaced in Syria – an increase from a long-held U.N. estimate of 6.5 million – as well as 3.3 million Syrian refugees abroad, 1.9 million displaced in Iraq and 190,000 who have left to seek safety. The vast majority of Syrian refugees have fled to Lebanon, Jordan, Iraq and Turkey. Western countries have frequently been criticized by aid agencies and the U.N. for not opening their borders to Syrian refugees, as the most developed countries have received the least number of refugees.
RELATED TOPICS