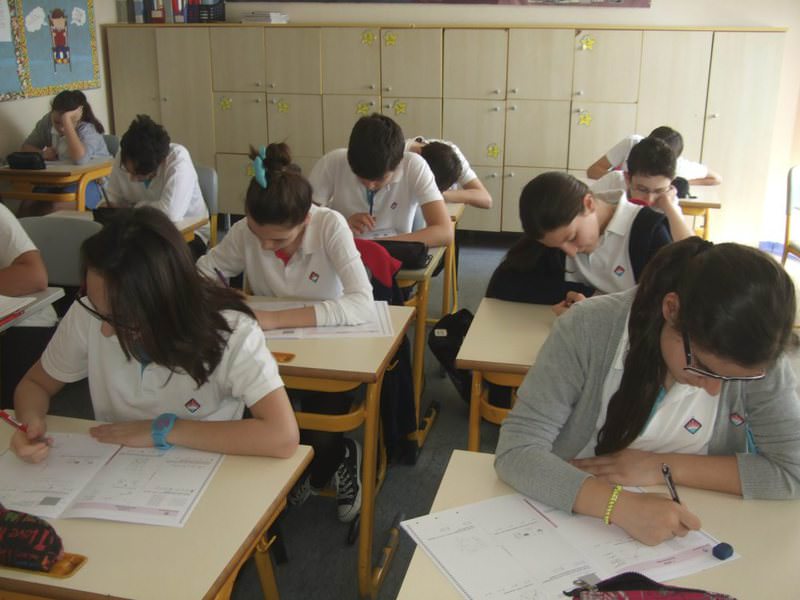 Turkey ranks at the bottom of the 24 European countries in regard to the English proficiency Index.
by Anadolu Agency Sep 09, 2015 12:00 am

The Foundation for Political, Economic and Social Research (SETA) conducted a study that examined the current condition of foreign language education in Turkey and offered solutions to help overcome the biggest obstacles in the field. The study was run by SETA analyst Başak Çoşkun Demirpolat and is titled "Turkey's Test with Foreign Language Education and Suggestions for Solutions."

The foundation recommends establishing foreign language libraries to provide high quality and free-of-charge materials for students at every level.

The students began to receive foreign language education starting from second grade at the elementary school and they continued to study it until the university graduation. However, foreign language is either cannot be learned or cannot be taught in Turkey despite all the improvements.

The study claimed that there are many reasons behind this lack of proficiency in English among Turkish people. Some of the biggest reasons listed were inadequacy in training English teachers, trying to determine people's English capacity with flawed proficiency exams like KPSS, crowded class rooms, the lack of proper material and equipment, and the lack of a common syllabus for foreign language.

In light of this information, the study also provided solutions to overcome any obstacles for foreign language education. The study suggested setting certain standards at universities to overcome problems with teachers, instructors and education faculties. Moreover, solutions such as employing native speaker instructors at the higher education institutions were seen as beneficial because non-Turkish instructors could train future teachers in addition to exposing students to a natives speaker, and enable future foreign language teachers to visit English-speaking countries.

On the other hand, the analysis also discussed how foreign language teachers should be employed. It is suggested that teachers who are teaching foreign languages despite the fact that they are not specialized in them should stick to their field of training. During their service as teachers, instructors have to continue to receive education regarding their fields and they should not be hired based off multiple-choice test results but with interviews.

Among the solutions suggestions, the study also highlighted that new materials should be developed for teachers to use in more crowded classrooms or schools whose sources are more limited. It also said that the planning of the textbooks should be carefully planned and the writers should be given enough time to complete the textbooks. Moreover, the study recommended that a native speaker should be present during the commission that decides on the textbooks to be used in classrooms.

The study highlighted that the contents of the foreign language textbooks should be authentic. The passages that the students read should be taken from an English magazine or a newspaper. These passages should be categorized according to students' English levels and they should be adapted to the culture in which the students are brought up. The analysis stressed that using real life stories provide a better learning process for students.

It was also noted that the Ministry of National Education should contact the publishing houses publishing textbooks for foreign language education and sign partnership agreements for providing high quality textbooks that are suitable for students' cultural backgrounds.

The other suggestions were listed as:

- Knowing a foreign language should be a must for school principals.

- Foreign language teachers should continue their training even after graduation and they should be encouraged with certain prizes.

- Students should receive education in classes which are divided according to the level of knowledge.
Last Update: Sep 09, 2015 1:33 am
RELATED TOPICS