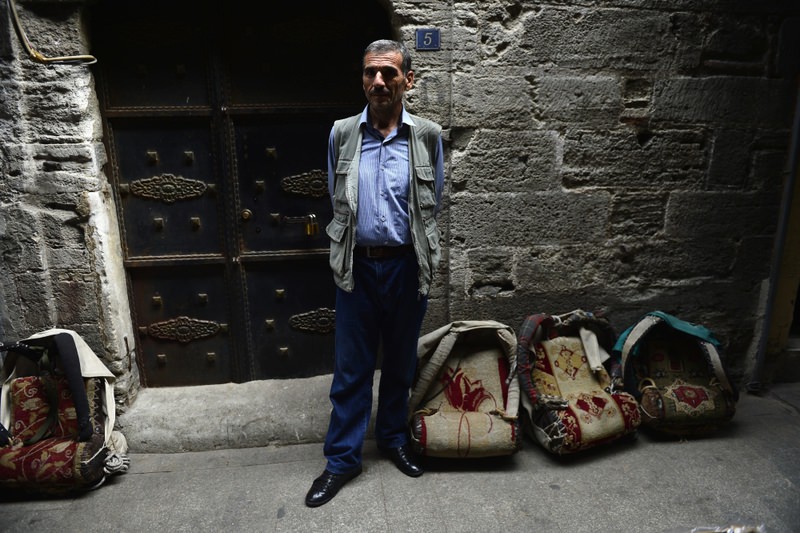 As Tahtakale district has lost its hectic atmosphere of old and many shop owners have left the neighborhood, there is not much of a need for hamals in Eminu00f6nu00fc.
by Anadolu Agency Sep 12, 2015 12:00 am

Hamals, people who carry heavy loads on their backs with the help of a saddle pack, struggle to keep their job alive, as demand for the profession falls. While they can carry up to 200 kilograms of goods on a daily basis, their biggest problem is the lack of insurance and financial security

Istanbul's Eminönü district was once the home of porters (hamals), Istanbul's human beasts of burden who would carry heavy loads on their backs with the help of a "semer" (saddle packs). Working continuously, disregarding hot or cold weather, the last hamals of Istanbul still earn their living walking along narrow streets and along the steepest roads of Tahtakale, a neighborhood in Eminönü that has acted as a trade and business center for years. The city's silent heroes now sometimes return to their homes with empty pockets, as Tahtakale has lost its hectic atmosphere of old and there is not much of a need for them. Many shop owners have left the neighborhood and opened new shops in the İkitelli and İSTOÇ Trade Center, which house many small- and medium-sized manufacturers and merchants. The "hamallık" profession has increasingly sunk into oblivion in Eminönü.

Many of them took over the job from their fathers, while others resorted to becoming a hamal because they went bankrupt or had no other choice. Their only commonality is that being a porter is a rather effortful task and no one regards it as profession today. Being a human beast of burden may appear like a job for younger generations; however, the average age of Istanbul's hamals is over 45. Because they carry heavy loads, many of them suffer from herniated discs and other back problems. Hamals carry up to 200 kilograms of goods on a daily basis. The lightest load is between 35 kilograms and 40 kilograms. As from the semers that weigh between 6 kilograms and 7 kilograms, they also use wheelbarrows to which they give humorous names like "Mercedes." While the hamallık profession has been largely relegated to the dusty pages of history, Anadolu Agency (AA) compiled the stories of Istanbul's last hamals.

Having engaged in manufacturing until he went bankrupt, İzzet Demirhan, 60, told AA that he has worked as a hamal for 10 years, but he is getting old. "I carry 50 to 60 kilograms per day and earn TL 50 to TL 100 [$16.56 to $33.12]. Our biggest problem is that we do not have any insurance. The hamallık profession has come to an end. Previously, fathers used to bring children here to become a hamal too, but I never want my children to do this," Demirhan said. He added that he contracted many illnesses due to his job over the years. "I have pain in my knees and back. As technology develops more each day, there is no need for us. Many tradesmen in Tahtakale moved to İSTOÇ," he said. There are about 1,000 hamals left there. "If I have the opportunity, I will leave this job. However, I have four children and all of them go to school. I do not want them to do this work, they should study and have a proper profession," he said.

Having moved to Istanbul from the southeastern city of Adıyaman, Faik Taşdemir said he has worked as a hamal for 30 years. "I did not go to school and had no profession, so I had to become a hamal. I greatly regret this and now look after my children, taking care so that they don't make the same mistakes. If they study, they do not have to do this hard job," Taşdemir said. Although Taşdemir only weighs 67 kilograms, he carries up to 100 kilograms. Similar to his fellow hamal Demirhan, Taşdemir also has health problems. He said his friends suffer from back, neck and knee pain. "Some of my friends had an operation and recovered. Some of them can no longer do this job. I want to raise awareness among young people about the importance of education, encourage them to go to school and help them avoid what we suffer from," Taşdemir said. Goods are now carried on steel wheelbarrows and fork-lifts, decreasing the need for hamals. "We are the city's last hamals and make minimum wage. However, we all get exhausted every day just to earn this little money. I even see blood in my eyes. We start at 8:00 a.m. and leave at 5:00 p.m.," he said, adding that the hamallık profession is the only choice for them, even though they have to climb the steepest roads no matter whether it rains or the sun is bright.

Şükrü Karakuş started this job at the age of 49. After working for 15 years, he tried working in manufacturing but failed. "I was unlucky and went bankrupt. I now work as a hamal to earn money. I see only one advantage of being a porter. I was 114 kilos four years ago when I returned this job. Now I weigh 99. I left school after primary school and could not find any other job," he said. Karakuş's father introduced him to the profession, however, Karakuş does not want to see his own son work as a hamal.

After working as a hamal for six years in Istanbul's Kazlıçeşme neighborhood, Hıdır Çakmak, who came to the city from the southern city of Malatya in 1982, had the opportunity to find work in the textile industry. He remained in manufacturing for 22 years, but things did not go well for him, and he had to become a hamal. "I had a very good job, but did not use the opportunities that were presented. Now I punish myself. You may not believe me, but I do not have health problems. I used to sit all day in my previous job, but I feel healthier now. Some friends have back and knee pain, but I do not experience any," he said. Çakmak added that young people do not work as hamals now. "Many years ago, hamals could buy a house or car, but now we can only live from hand to mouth. Sometimes we earn TL 50 or TL 30, sometimes TL 100. There are some days I do not earn any money," he said.
RELATED TOPICS