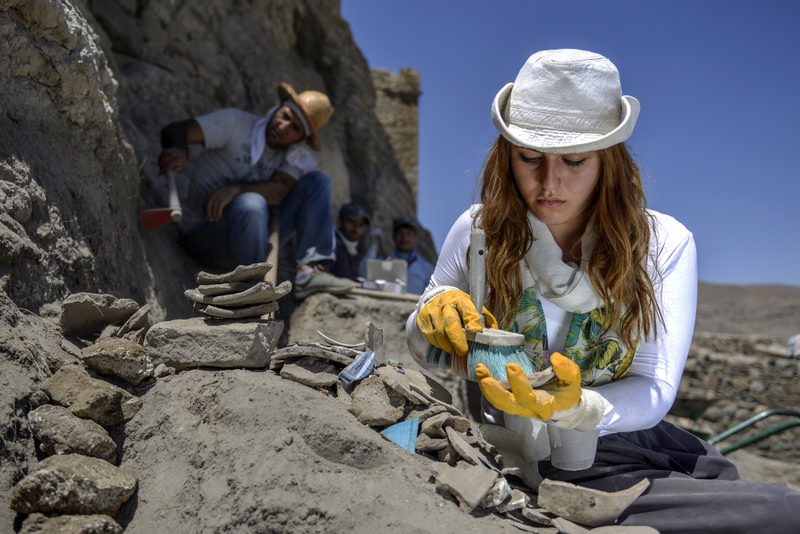 An archological team excavating a tumulus of the Van Castle revealed new information about the social life and architecture of the region from 7,000 years ago. The team members also focus on findings belong to ancient Urartian civilizations and the Ottomans

More findings around an ancient urban settlement have been unearthed in a tumulus in the northern part of Van Castle during excavations conducted by the Ministry of Culture and Tourism. The findings have given researchers more information on a 7,000-year period that includes the history of the ancient Urartians as well as cast a light on the Ottoman era. 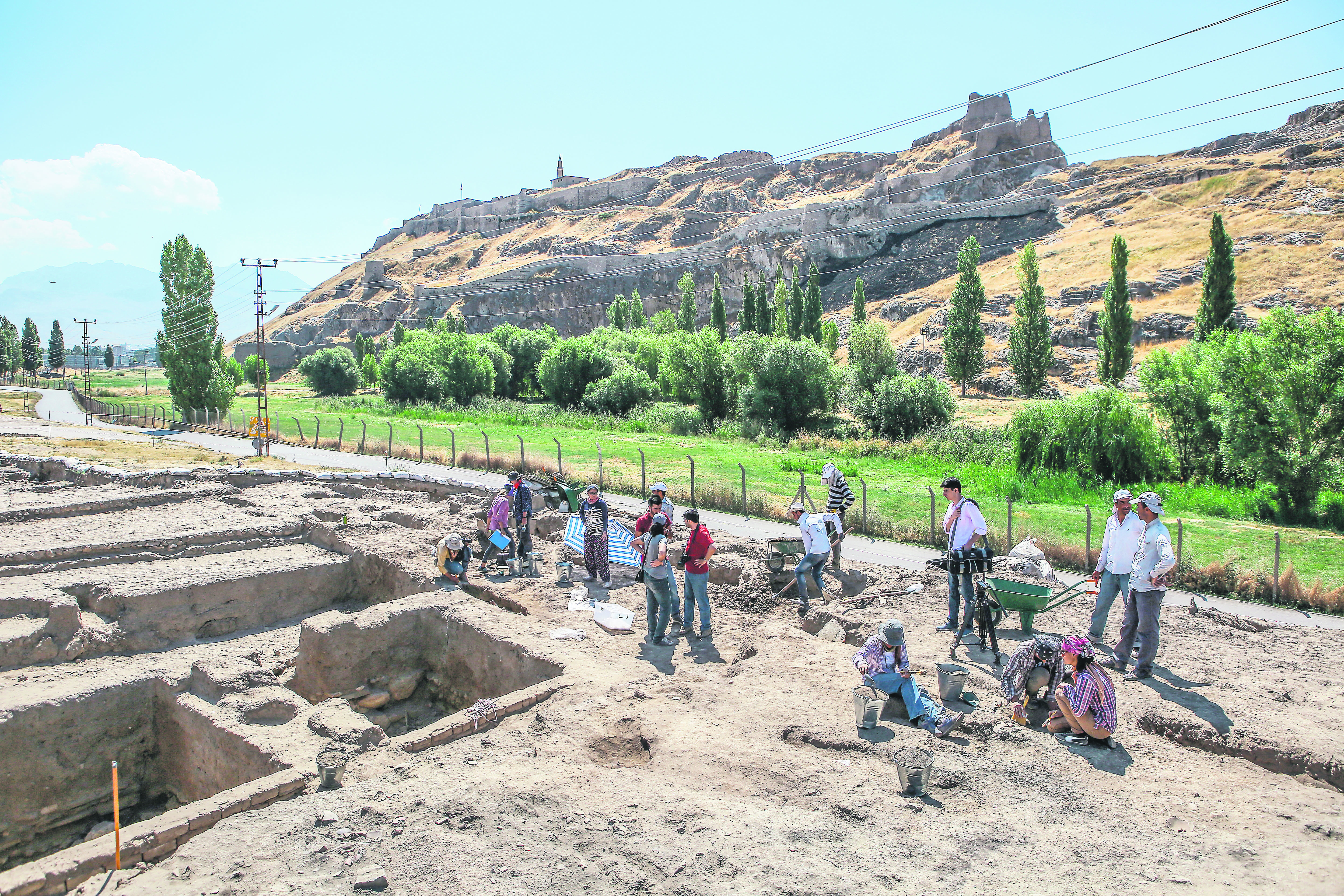 There are 37 experts from 12 universities participating in the excavations.

The excavations continue under the supervision of Associate Professor Erkan Konyar of the Istanbul University Faculty of Letters History and Archeology Center in Van and his team of 37 experts. Built by the Urartians and attracting the interest of local and foreign tourists with its magnificent history, the ruins surrounding Van Castle have revealed information on the lifestyles of the people who lived here during this period. The old city of Van, destroyed by Russians in World War I, and a tumulus in front of the castle will enhance the tourism industry. The findings will help experts learn more about the period's culture, social structure and architecture. Speaking to an Anadolu Agency (AA) reporter, Konyar said that members from 12 universities are participating in the excavations and the team has found artifacts that date back 7,000 years. Konyar said that they work in the old city, as well as the castle and tumulus. Archeologists are currently focused on an Urartian neighborhood and houses. "We can see what is possible to find in an Urartian house. Bronze accessories are one of the significant findings. We also uncovered cemeteries. They all help us learn about the social structure and life standards of the period," he said, adding that experts from different disciplines gather at the tumulus for further research. "We are willing to unveil the long-rooted history of Van and its stories and publish our findings," he said. Konyar said that the tumulus' general character is different from others around the region.

Konyar said, "We are excavating the lower settlements of the capital city. There are places where kings lived and right next to them, we are coming across civilian architecture." According to Konyar, the characteristics of these civilian places are naturally different. "These are the buildings where people who are connected to the palace lived. The architectural quality is better in these buildings. We found a variety of artifacts such as rings, earrings and fibulas. The bracelets ornamented with lion and dragon heads indicate that the quality of this place was higher when you compare it with other settlements." 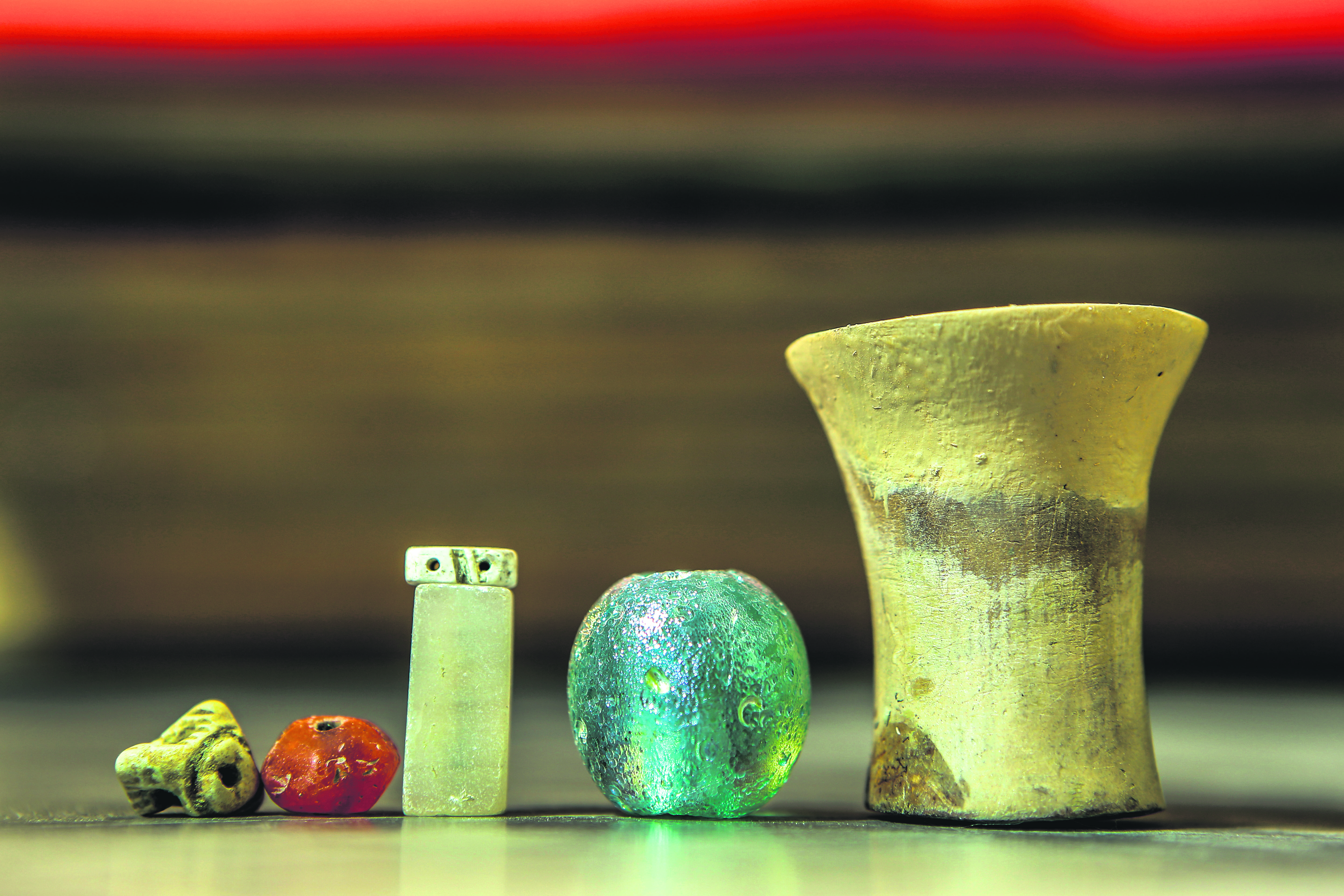 The artifacts such as a bronze wristband, ring, earring and bead shed light on the culture and social life of ancient times.

Konyar continued by saying that the architecture of the villages in the region has not changed much in the last 7,000 years. He said that people decided to build their settlements vertically instead of horizontally and the only constant thing in the architecture is the use of adobe.

"After the mid-20th century, people began to build with concrete; however, the use of adobe still continues in the villages, as they preserved their living standards," said Konyar and continued, "The constructions of the cities have changed in accordance with the living standards but I recommend for people to settle in adobe buildings because it has been used for 7,000 years and it has proved itself to be useful." He said an adobe building provides a healthy living environment for occupants.

Konyar underscored that they aim to open Van Fortress Tumulus to the public once the preservation and restoration works are finished. He said they work to serve humanity and highlighted the importance of these kinds of places in order for people to know more about their own history.

The tumulus sheds light on a period of 7,000 years and the archeologists plan to make the tumulus visible in the shortest period possible, aiming to show people what life was like 7,000 years ago.

Konyar said that the people of Van will be able to see the places that their ancestors lived in after taking a short journey from the city center. He concluded by saying that historical places such as the tumulus is important for young people to know more about their past and history.
RELATED TOPICS