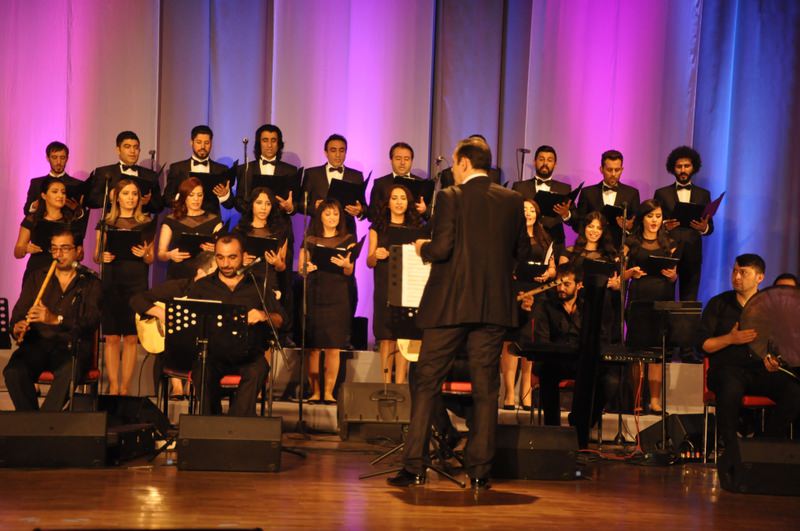 The Koroya Kurdi project started six months ago and traveled to nine cities where selections were made among almost 1,000 people. The chosen candidates were brought to Istanbul and received one month of training.
by Daily Sabah with AA Sep 22, 2015 12:00 am

Koroya Kurdi, a polyphonic and multilingual choir whose vocalists perform in Kurdish, Armenian, Turkish, Arabic, Zazaki and Sorani, interprets Anatolian and Mesopotamian folk songs in their original languages and within their cultural contexts

Speaking to Anadolu Agency (AA), the choir's producer, Genco Demirer, said Koroya Kurdi interprets Anatolian and Mesopotamian folk songs in their original languages and within their cultural contexts. Highlighting that the choir is a first-of-its-kind, Demirer said: "We started the project six months ago and have traveled to nine cities. Selections were made among almost 1,000 people. The chosen candidates were brought to Istanbul and received one month of training."

Vocalists perform in Kurdish, Armenian, Turkish, Arabic, and Zazaki, which are spoken by Zaza Kurds, and the central Kurdish (Sorani). "The choir is both polyphonic and multilingual. It is probably the most cosmopolitan choir featuring people from different parts of the country," he said. The choir will also give concerts aside from those that will be broadcasted on TRT Kurdi. "Dialogue is the most necessary thing to avoid conflicts and create a platform where people can understand each other. It can both unify and separate people. Culture can sometimes be a dividing factor and sometimes a unifying factor. Music, on the other hand, is one of the most unifying kinds of dialogue. It consists of many instruments and musical notes, and is unifying because it is universal," Demirer said, adding that the choir does not look at music from a narrow perspective. "As it is a first-of-its-kind, it will be an exemplary one. People conflicted with each other in different periods for political reasons, however, our choir gathers different voices, sounds, languages and dialects," he stressed.

Melikcan Zaman, one of the choir's co-conductors, said the project was conceptually different at the beginning of the year and has since been shaped over the following months. "You know, a seed is different from its plant; it later becomes a tree. Our idea was the same. We were a small group at first, and then turned into a big production. The project was further developed after, when more people showed interest in it," Zaman said. The 20-member choir is accompanied by a nine-member orchestra and two conductors. The team comprises of around 60 staff, including a production manager, assistants, cameramen and directors.

Zaman also underscored that the choir project departed from the concept of polyphony. "I mean polyphony, both in music and culture. We began with the interpretations of well-known Kurdish songs. Conductor Sedat Ezen exerted great efforts in this regard. We took polyphonic songs that were introduced to Armenian culture by significant composers for the repertoire and began to work on them. Now, we reap the fruits of our success," Zaman said. "In time, we want to become a polyphonic Kurdish choir that will appear on TRT permanently," he added.

Zaman said even soloists couldn't necessarily speak Kurdish or Armenian; they were trained to perform in the languages that they cannot speak. "This is the beautiful part of our choir and the aim of the project. We believe that all ethnicities have common ground, although we separate them by names. We are all the same, yet some differences have made us separate ourselves from each other. We are trying to unify our multilingual environment through the single language of music," he said.

Ezen added: "To bring our multicultural mix together, the choir performs Anatolian folk music and collects these songs in an archive." Stressing that the project is important as it archives songs and gathers different languages, he continued: "We believe in our project, and exert all of our time, effort and energy into it. This is a beginning; I hope we will do better and make more progress."

Vocalist Elif Gündüz, who is from Istanbul, said: "I am a Zaza Kurd. I cannot speak Kurdish but understand it. My friends and mother speak Kurdish." Gündüz said all members of the choir contribute serious effort to this project, adding that she passed conservatory exams as well.
RELATED TOPICS