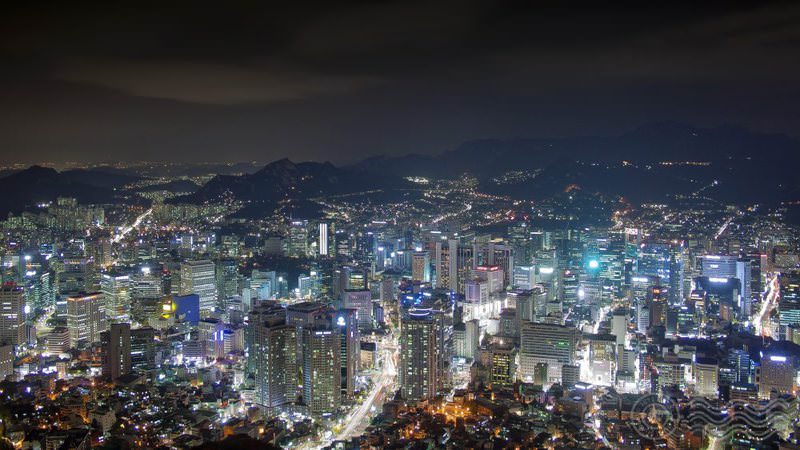 The International Conference of Asian Political Parties (ICAPP) media forum was held in South Korea, last week. The aim was to promote cooperation across Asia as well as help efforts toward creating a cohesive Asian community. The forum also promises to allow journalists and politicians to create alternative networks that can offer independence from major news agencies

Last week I flew out to Seoul, South Korea, for a media forum as part of the International Conference of Asian Political Parties (ICAPP).

My first impression of Seoul and South Korea was one of a clean, efficient city. Disembarking from the plane, I sailed through immigration and was immediately put on a bus bound for the hotel. My bags were whisked into the hotel, where the receptionist had the forms waiting for me. Within 10 minutes I was in my room. Ah, the room. Everything was automatic, swish and comfortable. The toilet had more technology than my car. I have never been intimidated by bathroom fittings, but that toilet had me reeling.The view from the room was onto a square where the public library is located. The public library dates from the Japanese colonial period (the late 1800s) and stands in front of the city hall. The city hall is an ultra-modern building, made of tinted glass, and giving the distinct the impression of a wave preparing to crash on the shore. The wave of the building seems to be cresting over the library; one wonders if the intention was to have the wave breaking over the Japanese colonial influence of the city. Whatever the intention, the drama of the two juxtaposed buildings is impressive.

But what is even more interesting was that there was a street market set up in front of the library. Farmers come there to sell their wares during the harvest season. Wandering through the market, one could not but help notice the similarities and differences with Turkish markets. The giant yellow pears were there, but each one was carefully wrapped in Styrofoam. There was a wide-range of apples. And hot red peppers, dried, flaked, fresh; that is where the similarities stop. Unlike Turkey, where one can find a maximum of three or four types of mushrooms, there was a great variety of mushrooms, in various states of dehydration. And even more unusual was the large number of dried fish, even dried anchovies. And the seaweed – all shapes and sizes. And of course, there were things I just couldn't begin to identify. As no one spoke English among the traders, we had to play a guessing game with some of these products.

The people working in the market were generous, offering us dried mushrooms – which were very tasty – and ginseng tea. The atmosphere was lively, with live music playing in the background. I could have spent hours there.

The striking thing about this market was that it brought the farmers and the public to the square in front of the city hall. The people were milling in and out, and the square in front of this administrative building was teaming with people. The idea that people were being brought to where the mayor and the city administration carried out their tasks, that the walls between them had been brought down, was refreshing.

South Korea has been dealt a poor hand by history. Korea is a peninsula that stands between mainland China and Japan. As such, it has been invaded a number of times by both Japan and China. For Japan, the peninsula offered an easy route for expansion, while for China it was seen as a buffer against the Japanese.

Japan colonized Korea at the end of the 19th century, but with Japan's defeat in World War II, Korea was liberated. As a result of this liberation, the Soviets and the Americans agreed to divide Korea down the 38th parallel. Here is yet another arbitrary line drawn by foreign powers and a liberation that had more in common with colonization than liberation; the 38th parallel, much like the Sykes-Picot line after World War I, became a line of contention.

As peace progressed, the Soviets and the West tried to bolster their vested interests in the region. The result was the onset of the Korean War, one of the least discussed wars of the 20th century. This war, beginning in 1950 and ending in 1953, is said to have cost up to 2 million lives. The U.S. State department has put the number of American battle deaths at more than 33,000. This number becomes more comprehensible when one considers that 4,500 American soldiers lost their lives in Iraq and 2,500 in Afghanistan. This large number of deaths in the Korean War occurred over a three-year period. Yet, in the Vietnam conflict, which lasted nearly 20 years, 58,000 soldiers died. The Korean War was a war in which there was great violence and a large number of deaths, yet it is the least "popular" war in the public's memory.

The Korean War ended up with the North remaining a communist country; interestingly enough, this part of Korea refers to itself as the Democratic People's Republic of Korea. The south is more democratic, and refers to itself as the Republic of Korea. How fascinating that neither country uses south or north in their official titles; both call themselves "Korea." It is even more interesting that a country which has the greatest dictatorship in the world – even foreigners have to bow to pictures of the great leaders in North Korea – a country which has never seen a free or fair election, calls itself democratic.

If one looks at a night image of the Korean peninsula, there is a striking difference between the north and the south. While the north rests in darkness, the south is pulsating with light. The reason for the difference is obvious. The north, a communist regime, has a centrally planned economy, with heavy investments in weapons and arms. With the collapse of communist regimes in the 1990s, principally the Soviet Union, North Korea lost many of its natural supporters and investors. The south has large investments in technology and industry. Hyundai/Kia, LG and Samsung, these are all South Korean. The great surge in technology and industry has made South Korea a country that is fast becoming a leading nation in production.

The reason we were in South Korea was part of an effort to establish a media forum for ICAPP, an organization of political parties throughout Asia, right, left or middle, which comes together to talk about how they can cooperate and create an Asian community.

The idea for a media forum was originally to create greater and more diverse media coverage for ICAPP, and to promote communication, interaction and cooperation between international media outlets and ICAPP to help efforts toward creating a cohesive Asian community. The ICAPP Media Forum consisted of members of ICAPP Standing Committee and one journalist from each represented country. 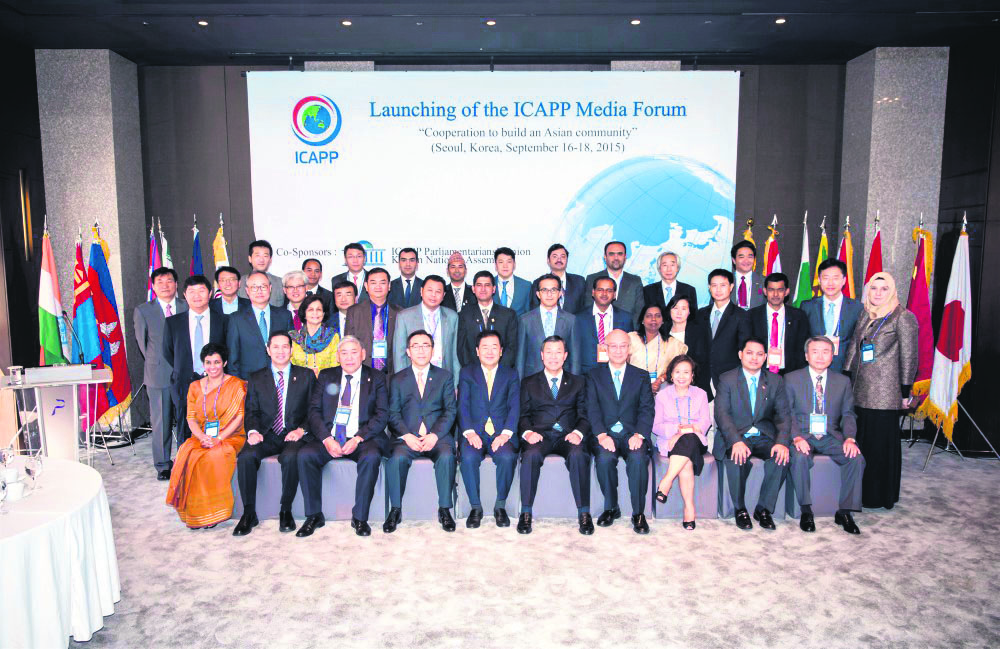 Since being launched in 2000, ICAPP has sought to increase cooperation and communication across Asia. More than 370 parties in 53 different countries are eligible to participate in ICAPP. Hwang Jin-ha, secretary-general of South Korea's Saenuri Party, was elected co-chairman of the ICAPP Media Forum. In his address to the forum he said: "Interdependence between politics and journalism is indispensable nourishment for political development as political democracy expands along with the increased roles and responsibilities of political parties."

It soon became apparent that there was other fruit to be gained by such cooperation. Carmen Perosa, a senior journalist at The Philippine Star who was elected co-chairwoman of the media forum, commented: "What is true of Asia is that we don't know each other; we were all colonized at one time or another and that separated us." Perosa continued in her own column: "I have heard the expression 'people-to-people' many times as the best way to charge communication … people-to-people conversations are seldom contrived. They are spontaneous expressions of daily living."

The forum provided a rare opportunity for people – not politicians – to come together and talk, to have spontaneous expressions, to come to know one another and finally to establish a network for further conversations.

All the journalists present were in agreement with the politicians – a very rare event in and of itself – that if Asian journalists could cooperate this would be a good thing. Thailand, which suffers soft coups, Pakistan, which suffers "less soft" coups, the Philippines, India, Cambodia, Mongolia, Nepal and Azerbaijan, have all had issues of late with international media organizations. The slant put on events that occur in each country, the cherry-picking of facts that fit with the international media's agenda – all of these factors have not escaped the attention of Asian journalists.

The idea that not only would the forum help to establish cooperation and understanding, but also allow journalists and politicians an alternative network that would be independent of the big news agencies was met with general approval. Journalists want to be independent of politicians, but they want to be able to get at the truth. Getting at the truth in places that are geographically distant, for example, Mongolia, is not always easy; this is one of the many things that the ICAPP Media Forum can offer.

The similarity of the stories – political and historical - as related by both politicians and journalists was striking. What happens in Bangkok does not stay in Bangkok. It gets adjusted, tweaked and exported to other countries. The same goes for what happens in Istanbul or in Islamabad. There is much that Asian countries can learn from one another.

However, there is one question that hung over our heads that day: How much does Turkey qualify as an Asian country? Is it not trying to gain recognition by the EU? Is it possible to be in the EU and in an Asian community at the same time? ICAPP has a wide-range of participants, including Russia and Australia – so geographically, why not Turkey? More than half of Turkey is in Asia Minor; Turks can trace their ancestry back to Mongolia and even Korea, and links have been established between the Turkish and Korean languages. Turkey is in a unique position in that it can look to the West and be European. It can also look to the East and call itself Asian. It can look to the north, where the Turkic republics are, or to the south. Turkey is in the middle of a number of different regions, and in some ways belongs to all, while belonging to none. But being Asian may be a great strength for Turkey. After all, the biggest concentration of the global population is in Asia, and the technological strengths of India, Korea, Japan and China are undeniable. Turkey has a choice, putting it in an enviable position.

This trip to South Korea brought some interesting facts to the fore. Eastern Asia and southern Asia are growing and expanding regions. They promise much for the future. The fact that Turkey has many links to South Korea, including sending a total of 15,000 men over the course of three years to participate in the Korean War, means that there is an understanding between the two countries, perhaps best reflected in the fact that Istanbul and Seoul are sister-cities. The growth of Asia means that Turkey has a choice. She can continue to look west, at Europe, which seems to be getting bogged down in debt and crises, or she can look east, where there is a promise of growth and development. Not a bad position to be in, actually.